Veterans from the University of Alabama and Auburn University have united to march 150 miles as one to raise awareness for the 22 veterans lost each day to suicide.

The more-than 70-hour journey, named for the Iron Bowl Ruck March, began at Auburn’s Jordan Hare Stadium on Wednesday. It will conclude at Bryant Denny Stadium in Tuscaloosa on Saturday prior to the Iron Bowl between the two football rival schools.

Approximately 30 people are marching in the group from Auburn to Tuscaloosa while supporters follow in vehicles and provide logistical support along the way.

All pictures by Kody Pemberton/Special to Breitbart News

Participants are carrying a 22-pound ruck-sack to coordinate with the Mission 22 suicide campaign. The packed load consists of toiletries, undergarments and other items collected by the Student Veteran’s organizations and will be donated to the Bill Nichols State Veterans  Home in Alexander City, Alabama.

“As a Mission 22 Ambassador, I always try to push the message that one veteran lost to suicide is too many; but 22 is just astonishingly far too many and we desperately need to save our brothers and sisters,” said Kyle Venable, president of the Student Veterans Association at Auburn University. “Being so dear to my heart, the first idea I thought of was marching with 22-pound rucksacks.” 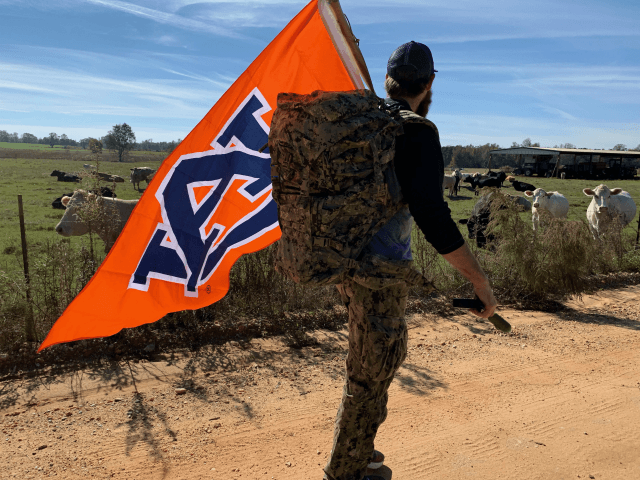 After an opening ceremony at Jordan Hare Stadium on Wednesday, participants began their trek. The group’s plotted course has taken them through Notasulga, Tallassee, and Wetumpka.

Since the march is occurring during Thanksgiving and participants are away from their families, the group has planned to stop on Thursday to have lunch with one another. 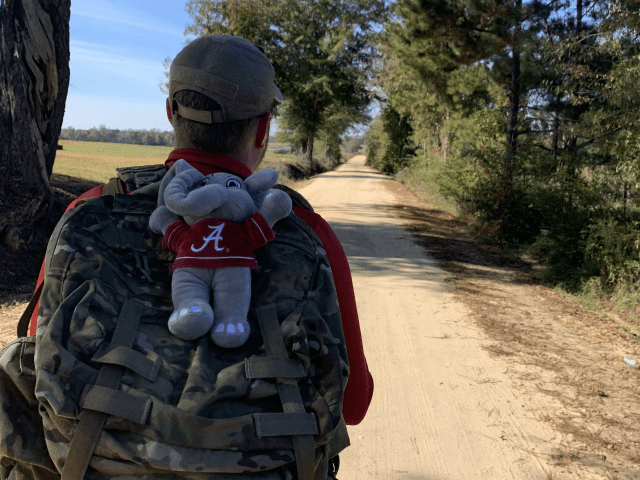 “This ruck march will not only build the camaraderie of the student veterans from both schools, but it will also bring awareness of Mission 22 to the area and let those who are struggling know we are here,” said Kody Pemberton, Campus Veterans Association President at the University of Alabama.

Upon arrival at the University of Alabama on Saturday, the group will march into Bryant Denny stadium for a photo. The Alabama Marines Foundation will also have a welcome party for the participants near Clara Verner Tower.