President Donald Trump on Monday accepted House Speaker Nancy Pelosi’s (D-CA) invitation to deliver his State of the Union address before the House chamber on February 5. The set date comes after the White House and congressional leaders reached an agreement to end the partial government shutdown last Friday.

“When I wrote to you on January 23rd, I stated that we should work together to find a mutually agreeable date when government has reopened to schedule this year’s State of the Union address,” Pelosi wrote in her letter to the president.

“Therefore, I invite you to deliver your State of the Union address before a Joint Session of Congress on February 5, 2019 in the House Chamber,” it said.

The invitation was shared to Twitter by Pelosi’s deputy chief of staff Drew Hammill.

NEWS: Speaker Pelosi has invited President Trump to give #SOTU address on February 5, 2019 in the House Chamber. pic.twitter.com/5C4m0b4gAc

Shortly after, the president wrote in a letter to Pelosi that he is accepting her invitation. “It is my great honor to accept,” he wrote in his response. “We have a great story to tell and yet, great goals to achieve!” he said. 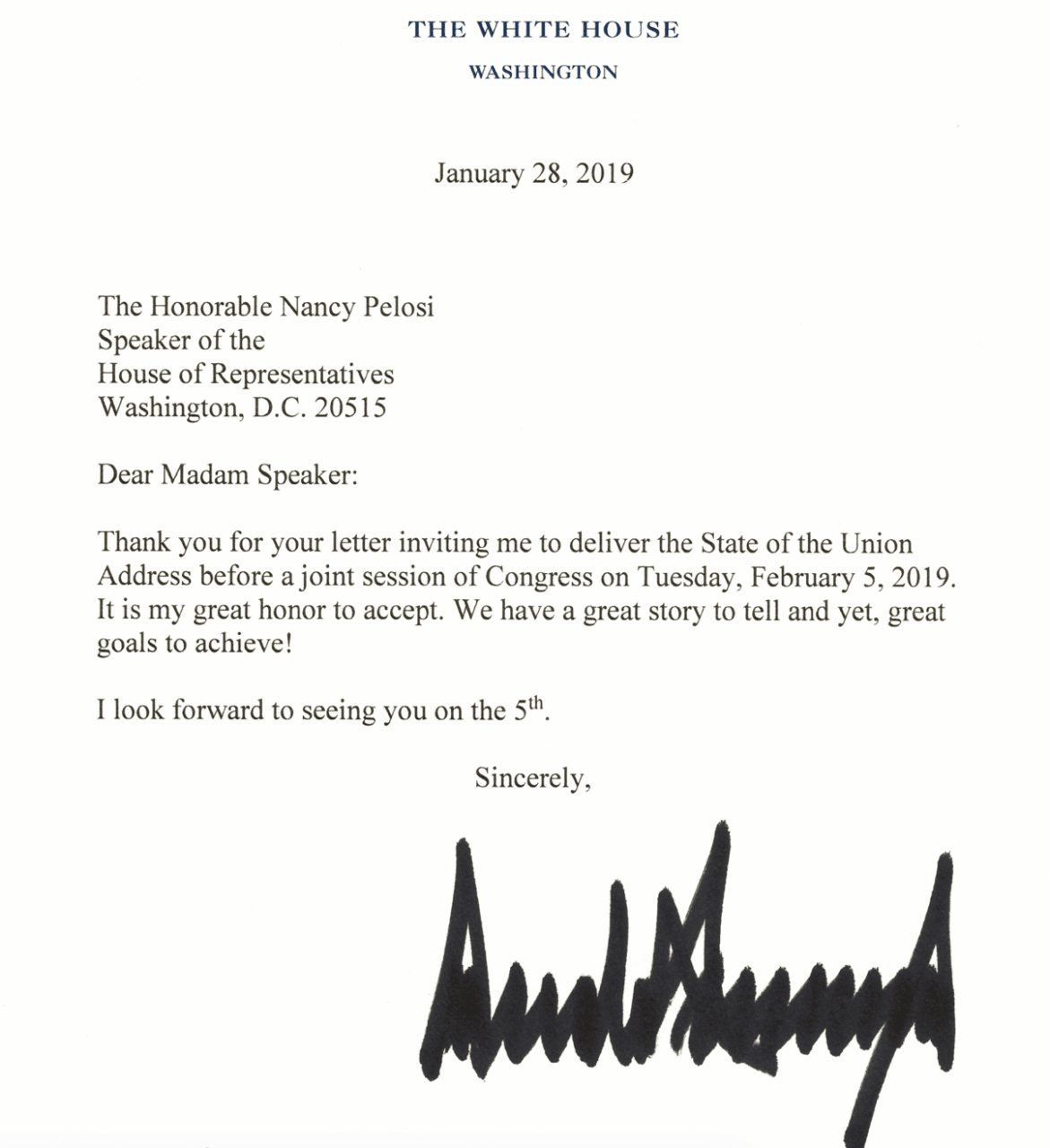 The House and Senate still must pass a resolution officially inviting President Trump to speak to a joint session of Congress.

Last week, President Trump said he would postpone his planned January 29th address until the shutdown had ended, stating last Wednesday evening that “no venue that can compete with the history, tradition and importance of the House Chamber.” He said he was not looking for an alternate option after Pelosi served notice that he wouldn’t be allowed to deliver the address to a joint session of Congress this week. Pelosi had told the president the House wouldn’t approve a resolution allowing him to address Congress until the shutdown ended. President Trump shot back that Pelosi was afraid of hearing the truth.

“I think that’s a great blotch on the incredible country that we all love,” he said of the move. “It’s a great, great horrible mark.”

The drama surrounding the State of the Union address began when Pelosi asked the president to make other plans, but stopped short of denying him the chamber for his address. President Trump called her bluff in a letter, saying he intended to come anyway. “It would be so very sad for our Country if the State of the Union were not delivered on time, on schedule, and very importantly, on location,” he wrote.

Pelosi quickly squelched the speech, writing back that the House “will not consider a concurrent resolution authorizing the President’s State of the Union address in the House Chamber until government has opened.”

The Constitution states only that the president “shall from time to time give to the Congress Information of the State of the Union,” meaning the president can speak anywhere he chooses or give his update in writing. The address has been delayed before. Ronald Reagan’s 1986 State of the Union address was postponed after the Challenger space shuttle exploded in flight on Jan. 28 of that year.