An article posted on CNBC Thursday morning, then linked on the Drudge Report, employed a false economic growth number to criticize the Trump administration by comparing it to Obama’s administration.

“The Commerce Department’s Bureau of Economic Analysis [BEA] measured 2018 growth at 2.8 percent, below the 2.9 percent Obama enjoyed in 2015,” a bullet point at the top of John Harwood’s story read. The problem? The correct BEA number was 2.9 percent, and year over year growth for the fourth quarter of 2018 was an even higher 3.1 percent.

An original screenshot of the article: 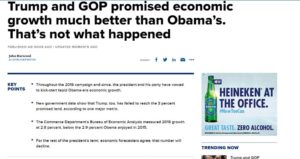 The article was only later updated with the correct number but kept the premise of the piece despite the matching numbers. It made the top of the Drudge Report shortly after being posted. It used economist predictions to project a negative forecast despite admitting, “For the 21st century economy, 2.9 percent represents strong performance in any event.”

Harwood further slammed the number with a comparison of President Obama’s eight years in office to President Donald Trump’s record just two years in office and with at least two to go. He slammed Trump’s two years of growth for not exceeding President Barack Obama’s entire eight-year annual growth record in office, during which Obama failed to reach three percent. Harwood pointed out that annual growth peaked at 2.9 percent under Obama in 2015. He went on to decry the BEA’s reference to 3.1 percent growth, promoting Obama as reaching three percent if using that measure.

GDP rates in 2018 saw a high of 4.2 in the second quarter and 3.4 percent in the third, only slowing in October to December to 2.6 percent. However, the 2.6 was a faster rate than economists anticipated. They had predicted an even lower 2.2 percent, Breitbart News’s John Carney reported Thursday.

USA Today reported the 2.9 percent news as the U.S. economy’s “best performance since the Great Recession of 2007-09.” MarketWatch also pointed out that the 2.9 percent rate matched the fastest growth rate since the “Great Recession.” That article further noted that it had polled economists and found they had predicted a much lower 1.9 percent growth rate, revealing the actual rate outperformed predictions there as well.

The Federal Reserve changed its rate-hiking tune in January from projecting two 2019 rate hikes to holding off on any. It has predicted 2.3 percent GDP growth for the current year.

During 2018, Americans saw the implementation of the Tax Cuts and Jobs Act, effects of tariff battles with China, and a year capped off at the tail end with a temporary, partial government shutdown. It also saw the forging of the NAFTA-replacing U.S.-Mexico-Canada trade agreement, a temporary truce on tariff increases with China, promises from China to buy more U.S. commodities, and renewed hope of a trade agreement between the two nations.