Noah Karvelis, the 24-year-old leader of the #RedforEd movement that inspired teacher strikes around the country in 2018 and 2019, wrote in an article published by a Marxist magazine last month that community organizing “must be embraced” by teachers, “particularly in ‘right-to-work’ states.”

Karvelis — who, after teaching music at an Arizona public school for just two years, led the Arizona teachers strike when he launched the #RedforEd movement in March 2018 — has confirmed in his own words what Breitbart News reported last week:

A well-funded and subversive leftist movement of teachers in the United States threatens to tilt the political balance nationwide in the direction of Democrats across the country as Republicans barely hang on in key states that they need to hold for President Donald Trump to win re-election and for Republicans to have a shot at retaking the House and holding onto their Senate majority.

This teachers union effort, called #RedforEd, has its roots in the very same socialism that President Trump vowed in his 2019 State of the Union address to stop, and it began in its current form in early 2018 in a far-flung corner of the country before spreading nationally. Its stated goals–higher teacher pay and better education conditions–are overshadowed by a more malevolent political agenda: a leftist Democrat uprising designed to flip purple or red states to blue, using the might of a significant part of the education system as its lever.

“The first lesson I hope people take away from Arizona #RedForEd is that a grassroots, rank-and-file movement is absolutely necessary — particularly in ‘right-to-work’ states,” Karvelis wrote at the Jacobin Magazine website in January. 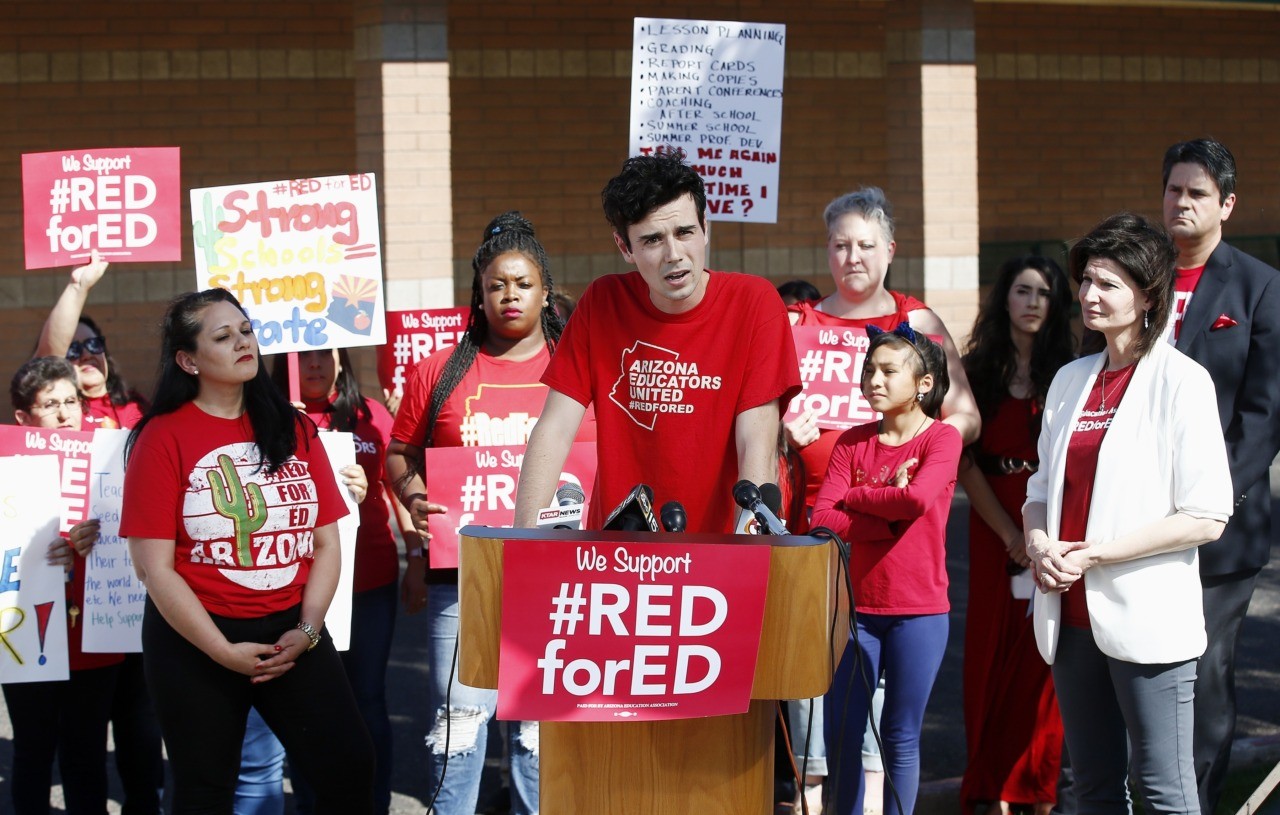 Karveli added four more lessons right out of the Saul Alinsky playbook, including (2) the need for “a community-centric orientation to teachers’ movements,” (3)  “that democratic organizing, whether through union reforms or establishing new structures such as Arizona Educators United, must be embraced,” (4) “that the gradual escalation of tactics that was embraced in Arizona, and originally mobilized in West Virginia, is a vital strategy that can be duplicated in nearly any setting,” and (5) “the most important lesson to be learned is that teachers have tremendous power.” 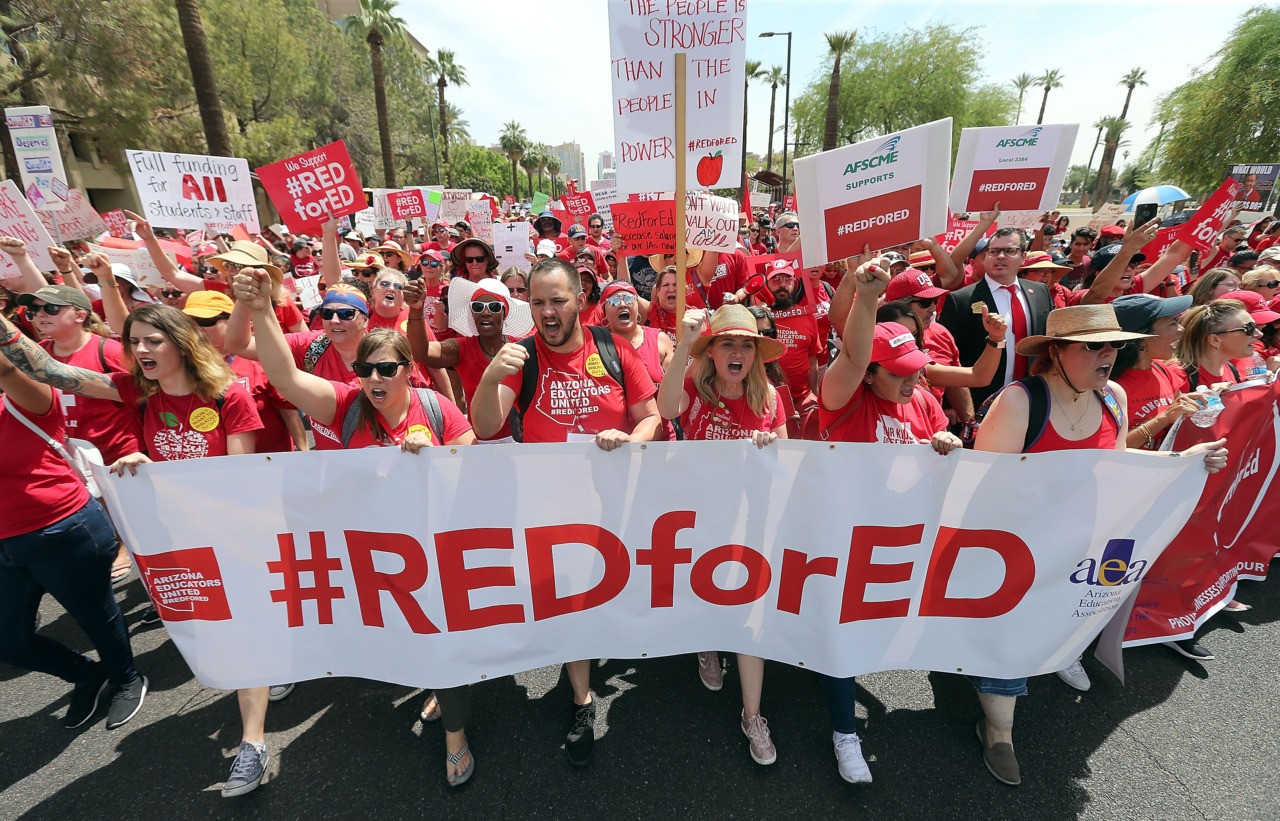 Thousands of Arizona teachers march through downtown Phoenix on their way to the State Capitol as part of a #RedforEd protest rally on April 26, 2018. (Ralph Freso/Getty Images) 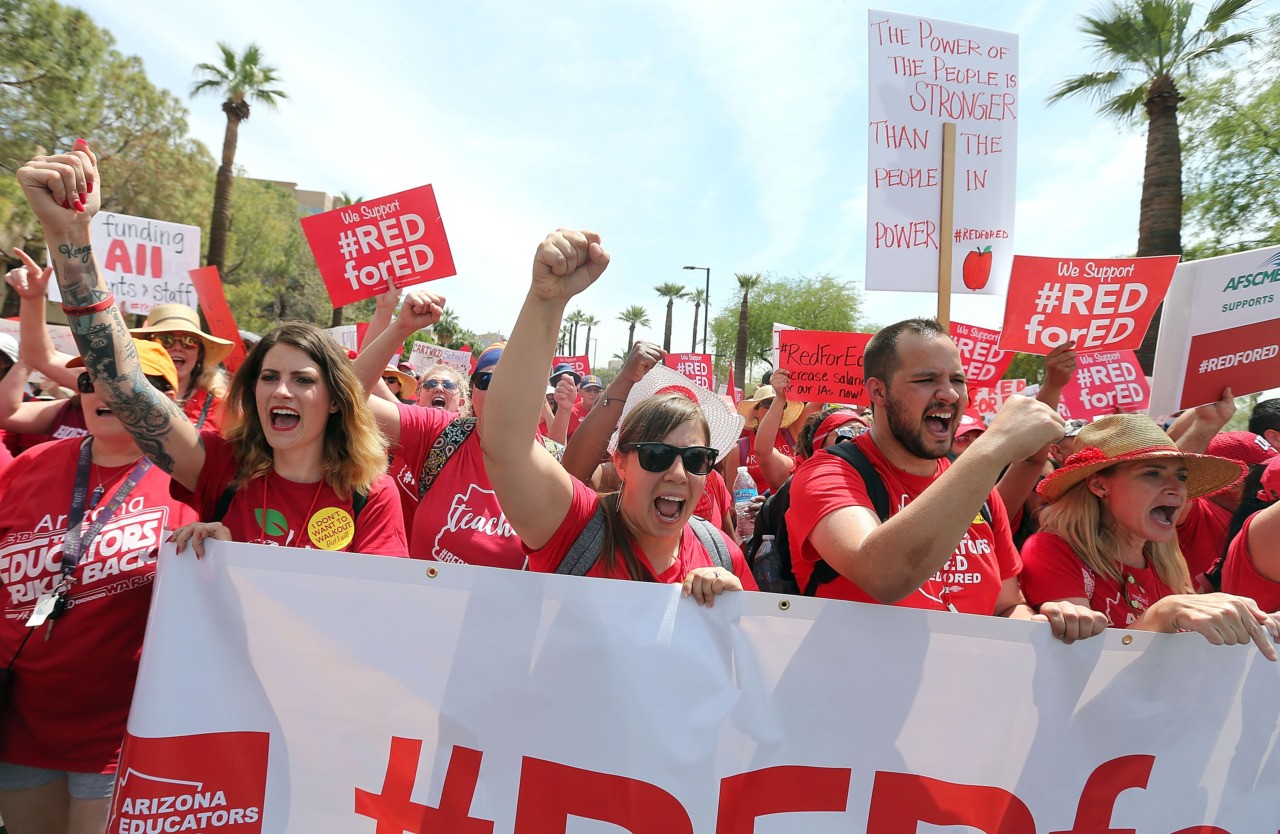 Arizona teachers chant in support of the #RedforEd as they walk through downtown Phoenix on their way to the Arizona State Capitol on April 26, 2018. (Ralph Freso/Getty Images) 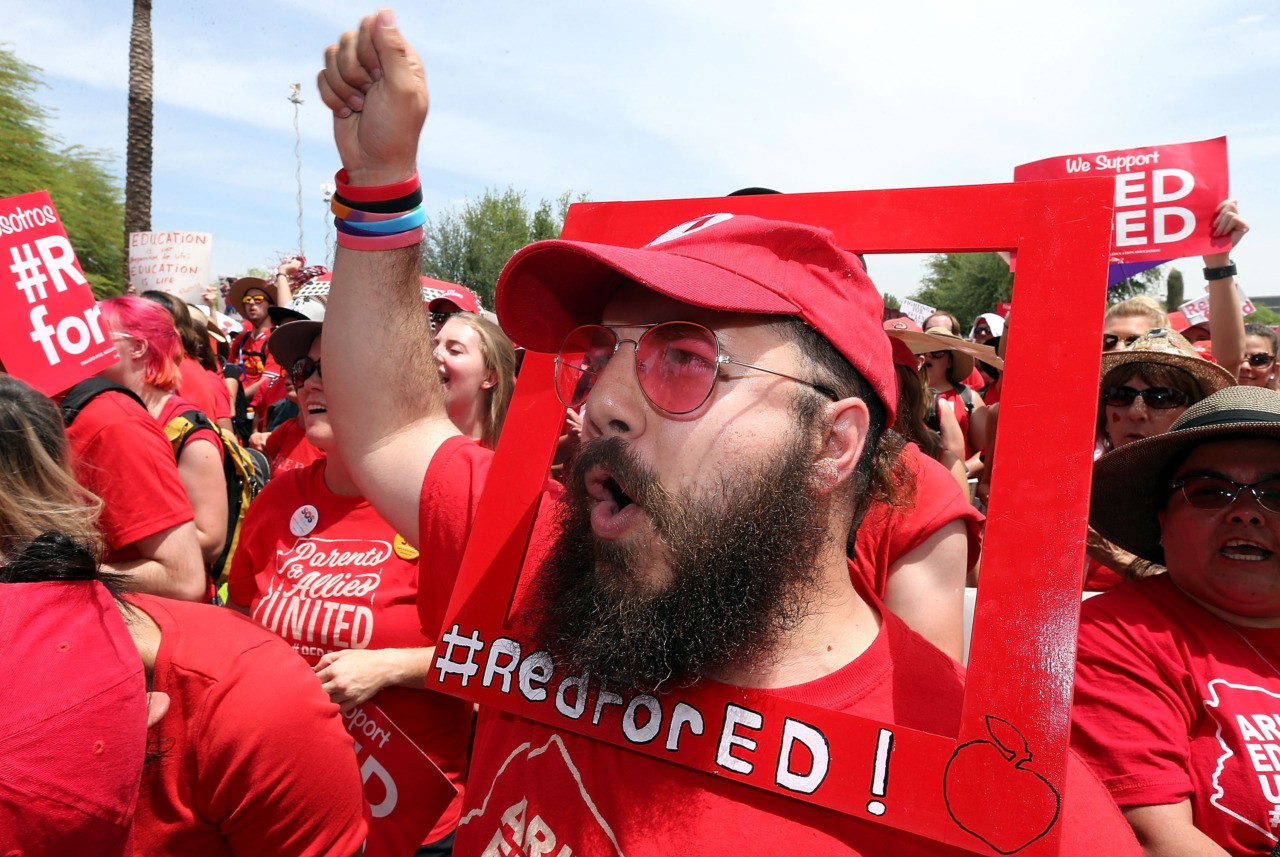 High school english teacher Aude Odeh cheers in support of the #RedforEd movement during a rally in front of the Arizona State Capitol in Phoenix on April 26, 2018. (Ralph Freso/Getty Images)

Founded in 2010 by George Washington University student Bhaskar Sunakra, the Jacobin Magazine is an unabashed promoter of Marxism, proudly taking its name from the radical left Jacobins who turned the French Revolution of the 1790s into a bloodbath for their opponents.

The magazine does not specifically use the word “Marxism” in its about us page, instead calling itself, “a leading voice of the American left, offering socialist perspectives on politics, economics, and culture.”

In a 2014 interview with New Left Review, Sunakra explained that he created Jacobin Magazine in order to “mainstream” the viewpoints of Young Marxists:

For me, it was a way of representing a politics that was neither Leninist nor the kind of broad liberal-left opinion you get in, say, The Nation or In These Times. It’s not a middle ground: I wanted to stake out a vision that was uncompromisingly socialist, but that married some of the accessibility of The Nation with the political seriousness of publications further to the left. A lot of what I was learning during the year I spent reading was how to convey these ideas in as simple a way as possible.

Young Marxists have a tendency to use lots of jargon, partly as a crutch for insecurity; there are some things we do need specialized terminology for, but a lot of these ideas are not actually very complex. So I was thinking about how best to popularize and mainstream them. Jacobin was meant to be bold, young, easy to read. The look of the magazine was part of that too—publications like Monthly Review or Dissent, for example, tend to have extremely long paragraphs, and there’s no ‘dek’ underneath the headline explaining what’s in the article. (Emphasis added.)

Sunakra elaborated on the Marxist orientation of his publication when asked by New Left Review about its “intellectual reference points”:

Though I don’t want to speak for everyone else, several of us came from traditions intellectually inspired by Trotskyism, without ever quite becoming Trotskyists—which is similar to Miliband or someone like Leo Panitch in that respect. We were very interested in the experience of the Italian Communist Party and other mass parties in Europe, and in the theorists of Eurocommunism—something that distinguishes us from a lot of Trotskyists. The Second International radicals were also very important for us—from the time before the SPD voted for war credits in 1914, of course! So we read Lenin, but also Kautsky’s The Road to Power. On the whole, we come from various traditions on the left, but you could say that there’s been a convergence of sorts between those who come from post-Maoist and post-Trotskyist milieux, and those from left social-democratic traditions. (Emphasis added.)

It is organized as a 501 (c) (3) non-profit, which means it is not required to reveal its financial backers, and claims its website has over 1 million unique visitors a month, while its quarterly print magazine has 30,000 paid subscribers who pay between $25 and $250 annually.

According to its website, subscribers select the amount they should pay, based on how guilty they feel for the wealth they have accumulated. 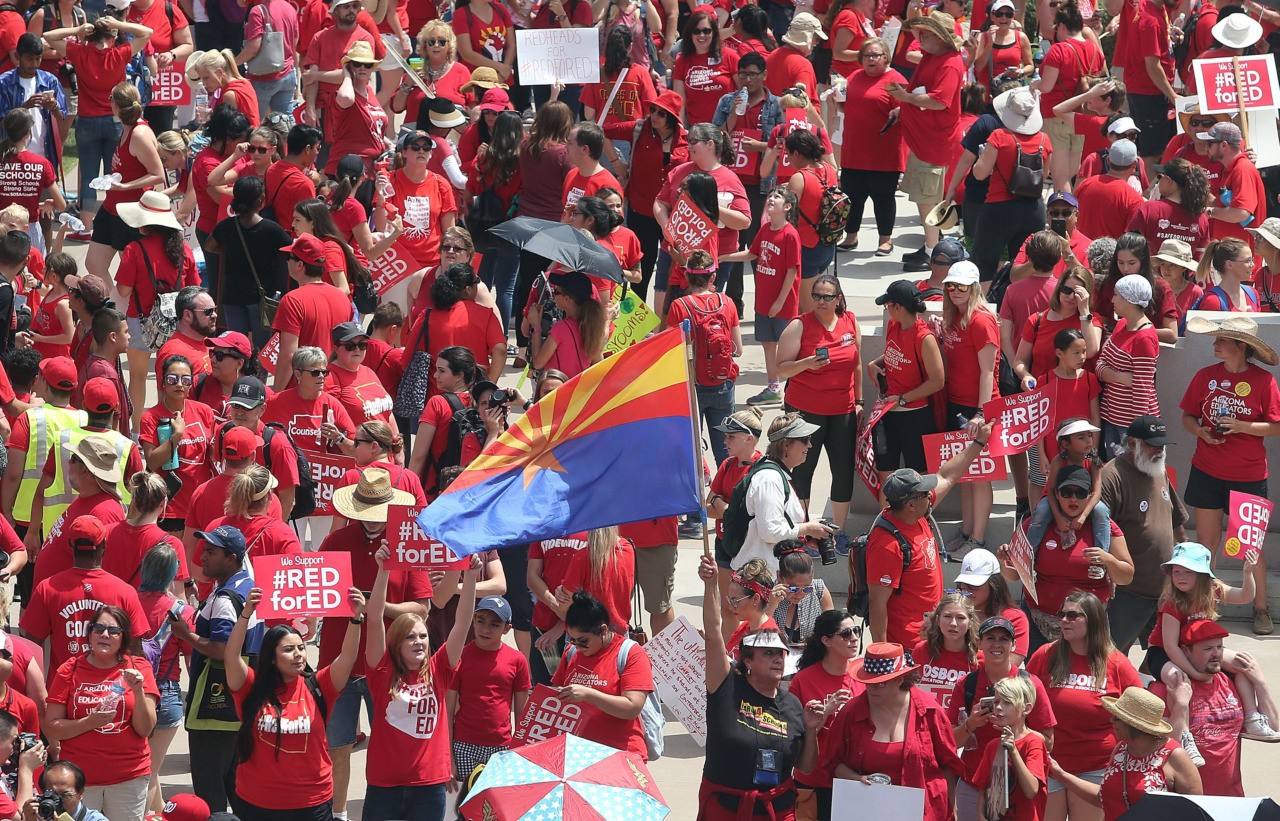 #RedforEd protest rally outside of the Arizona State Capitol in Phoenix on April 26, 2018. (Ralph Freso/Getty Images) 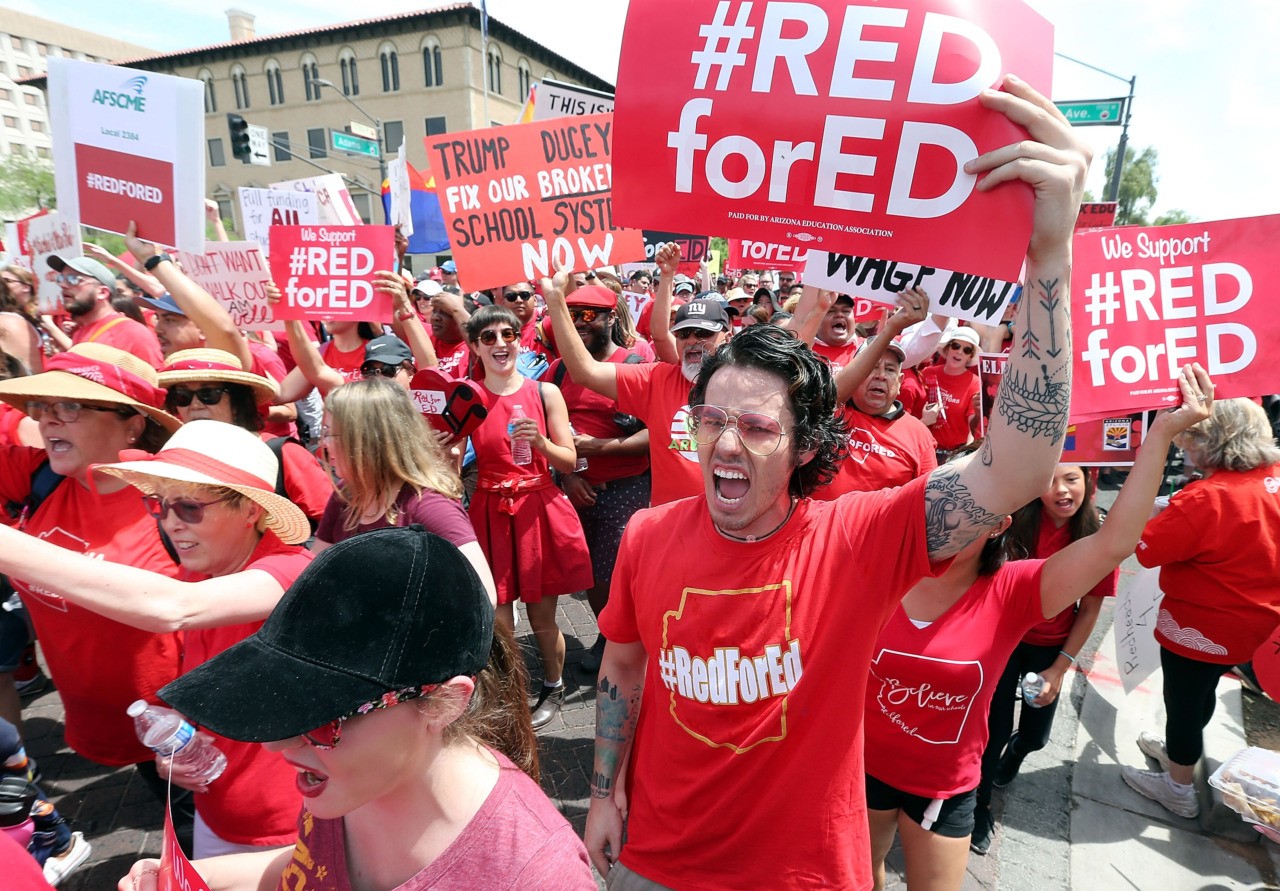 Teachers march through the streets of Phoenix on their way to a #RedforEd protest rally at the Arizona State Capitol on April 26, 2018. (Ralph Freso/Getty Images).

In 2016, Vox described the Jacobin Magazine’s growth and Sunakra’s role as publisher and editor:

Jacobin has in the past five years become the leading intellectual voice of the American left, the most vibrant and relevant socialist publication in a very long time. And in 2016 it’s bigger than ever, thanks to Bernie Sanders, who’s making his millions of supporters curious about what democratic socialism actually means. That’s an opportunity that Jacobin is seizing to great effect, even if Sanders isn’t far enough left for their taste.

The Sanders campaign “could begin to legitimate the word ‘socialist,’ and spark a conversation around it, even if Sanders’s welfare-state socialism doesn’t go far enough,” Sunkara wrote earlier this year.

“It is unapologetic about its interests in political economy and Marxism; it’s completely in-your-face in its style and tone; it has this name, Jacobin, that just seems designed to push people’s buttons,” Brooklyn College professor Corey Robin, a longtime leftist writer who signed on early and is now a contributing editor at Jacobin, says. “How could I not get involved with it?”

The magazine has been a constant supporter and promoter of the #RedforEd movement since it began in March 2018. This past week, it featured this article on charter school teachers in Oakland, California, supporting the current teachers strike there:

Negotiations are currently underway between the Oakland Unified School District and its teachers’ union, which went on strike last Thursday. The strike started strong, with fewer than 10 percent of all students in school and 85 percent of teachers on the picket lines. And it has stayed strong, with pickets, mass rallies, and marches occurring every weekday.

Among many powerful displays of solidarity, from unaffiliated labor unions and devoted community members, one in particular stands out: teachers from ten charter schools across Oakland engaged in a wildcat sympathy strike.

The magazine also encourages readers to join “reading groups” across the country, which look remarkably like activist cells, and are located in many of the areas that have seen recent strikes, such as Denver, Colorado, Oklahoma, the San Francisco Bay Area, and North Carolina. 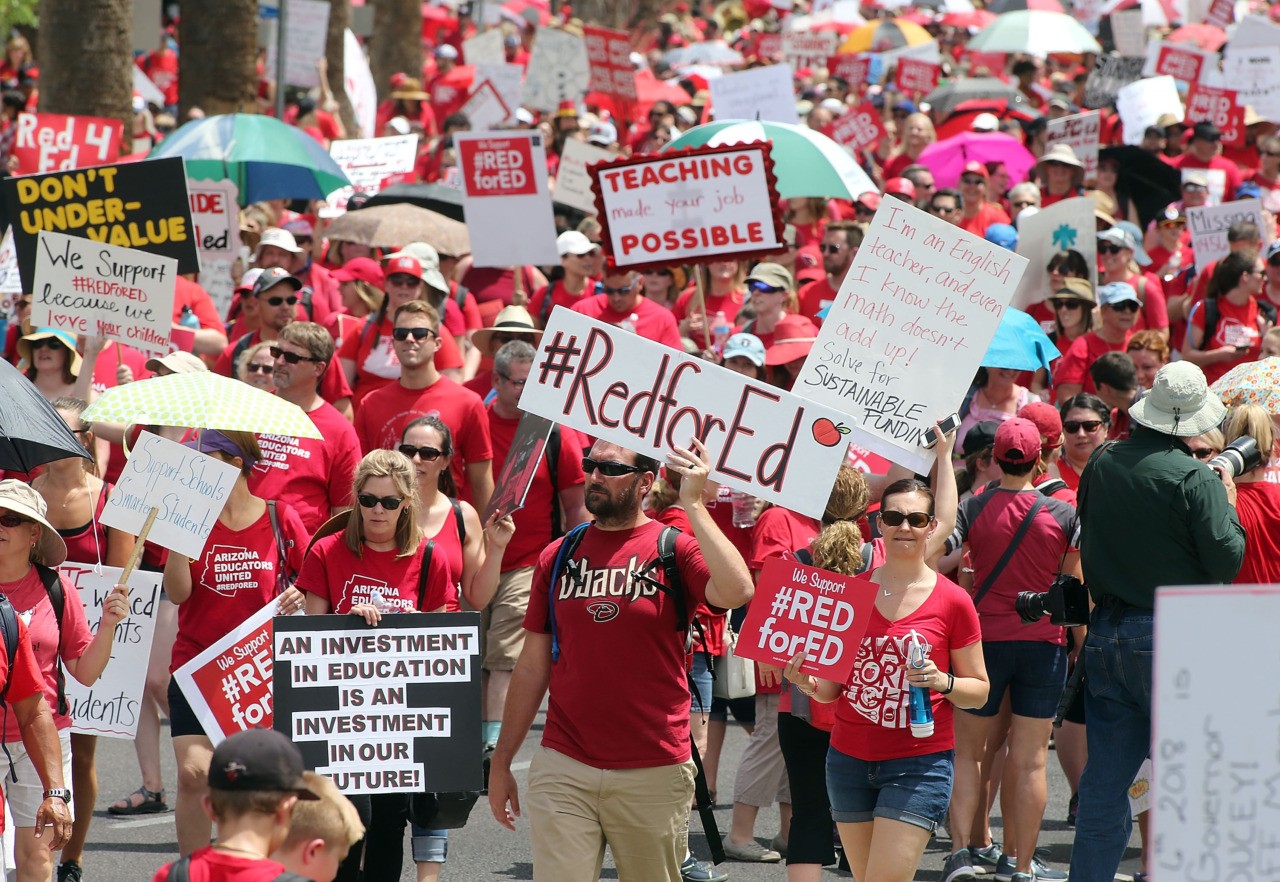 Thousands of teachers take to the streets of Phoenix on their way to a #RedforEd protest outside the Arizona State Capitol on April 26, 2018. (Ralph Freso/Getty Images)

The Los Angeles Times analyzed the ongoing wave of teachers strikes across California and the nation on Sunday, and determined that there is no broader movement — even though “#RedforEd” organizers might beg to differ.

The phrase “Red for Ed” did not feature once in an extensive article by Anita Chabria and Sonali Kohl, though teachers on the picket lines have told Breitbart News directly they saw their strikes as part of that broader effort.

The Times explained the wave of strikes across California — which was preceded by strikes in West Virginia, North Carolina, Arizona, and Colorado — as the outcome of “local problems” that teachers happen to have in common:

“There’s no doubt the L.A. Unified strike emboldened teachers in other parts of California and that teachers unions north and south have shared information with each other about their tactics. In Oakland, members of United Teachers Los Angeles were on hand to help with messaging and organizing. But teachers and labor leaders say there are unique problems at the district level that, in their view, will be addressed only if school administrators are confronted.”

Breitbart’s reporting is in direct conflict to that of the the Los Angeles Times, as it is becoming more and more clear that the #RedforEd movement is a nationally coordinated effort driven by young socialists aligned with teachers unions.