Bill Russo, a spokesperson for former Vice President Joe Biden, responded combatively to the blowback over various photos of the possible 2020 contender interacting awkwardly with women, calling some of the images “smears and forgeries” that have “existed in the dark recesses of the Internet for a while.”

“The Vice President has issued a statement affirming that in all the many years in public life that he has shaken a hand, given or received a hug, or laid his hand on a shoulder to express concern, support; or reassurance, he never intended to cause discomfort,” Russo said in a statement. “He has said that he believes that women who have experience any such discomfort, regardless of intention, should speak and be heard, and that he will be among those who listen.”

“But the important conversation about these issues are not advanced, nor are any criticisms of Vice President Biden validated, by the continued misrepresentation of the Carter and Coons moments, or a failure to be vigilant about a cottage industry of lies,” Russo added.

Biden spokesman Bill Russo with a lengthy response to coverage around the Lucy Flores accusation: “These smears and forgeries have existed in the dark recesses of the internet for a while.” pic.twitter.com/OtkUFnBeBi

The statement comes after Biden on Sunday defended his interactions with women, saying he doesn’t believe he has ever acted inappropriately. Yet a Nevada politician’s assertion that the former vice president’s kiss on the back of her head made her feel uncomfortable prompted some Democrats to question whether the 76-year-old is too out of step with his own party to run a successful 2020 presidential campaign.

The episode, recounted by Democrat Lucy Flores, highlighted an aspect of Biden’s behavior that has been publicly known for years: the affectionate whispers, hugs, and shoulder squeezes he has long doled out to women, often on camera and at high-profile public events. In a moment of national reckoning over sexual harassment and the treatment of women by powerful men, some Democrats said Biden’s actions have taken on a new light.

Appearing Sunday on CNN’s The Lead, Flores affirmed the former vice president’s treatment of woman was “disqualifying” as a presidential candidate. “For me this isn’t the only problematic thing, I think his response in the way in which he handled the Anita Hill hearing was completely inappropriate and lacked empathy and frankly lacked accountability, saying he wishes there was something more he could have done,” she told host Jake Tapper. “I think it’s again, a complete lack of accountability. You were the chair, you were the chair of that hearing, and you could have done anything you wanted. In addition to previous anti-abortion positions that he’s taken, et cetera, I find a lot of his background problematic.”

In a statement on Sunday, Biden contended it was never his intention to make women feel discomfort and if he did so, “I will listen respectfully.” The former vice president also said he “may not recall these moments the same way.”

“I will fight to build on the work I’ve done in my career to end violence against women and ensure women are treated with the equality they deserve,” Biden’s statement reads. “I will continue to surround myself with trusted women advisers who challenge me to see different perspectives than my own. And I will continue to speak out on these vitally-important issues where there is much more progress to be made and crucial fights that must be waged and won.”

Several women who worked for Biden stepped forward over the weekend to vouch for his character. And Stephanie Carter, the wife of former Defense Secretary Ash Carter, disputed characterizations of her interactions with Biden during her husband’s swearing-in ceremony. Pictures of the then-vice president whispering in Carter’s ear and placing his hands on her shoulders ricocheted across the internet at the time. 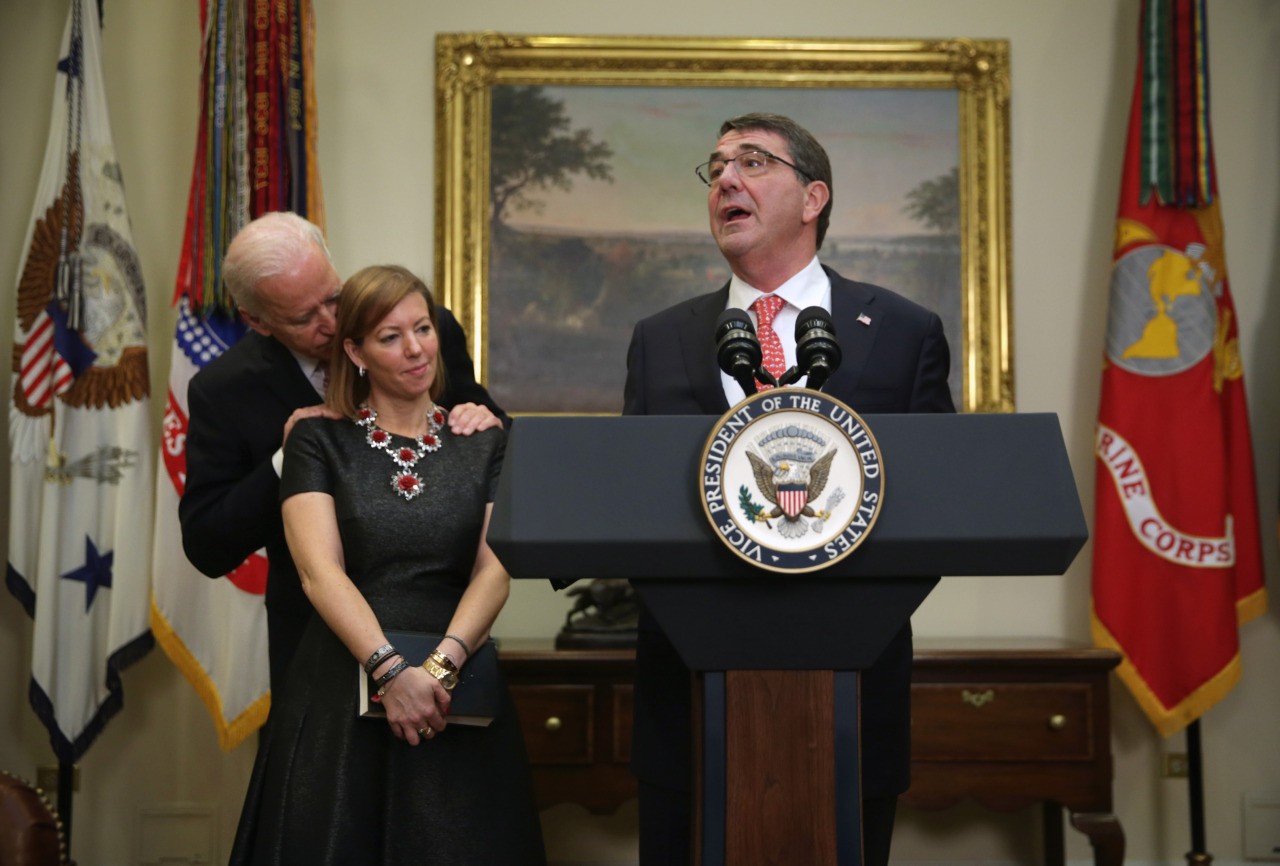 “After the swearing in, as Ash was giving remarks, [Biden] leaned in to tell me ‘thank you for letting him do this’ and kept his hands on my shoulders as a means of offering his support,” wrote Carter. “But a still shot taken from a video — misleadingly extracted from what was a longer moment between close friends — sent out in a snarky tweet — came to be the lasting image of that day.”

However, none of Biden’s potential rivals defended him following Flores’ allegations. Sen. Elizabeth Warren (D-MA) said she believed Flores and that Biden “needs to give an answer” about what occurred. Sen. Kirsten Gillibrand (D-NY) said, “Lucy Flores felt demeaned, and that is never okay. If Vice President Biden becomes a candidate, this is a topic he’ll have to engage on further.” In a Sunday interview with ABC News This Week, Sen. Amy Klobuchar (D-MN) said she has no reason to doubt Flores’ account. “I have no reason not to believe her,” she said. “And I think we know from campaigns and from politics that people raise issues and they have to address them and that’s what he will have to do with voters if he gets into the race.”

Biden has been warned by advisers that his past statements and actions, including his long history of hugging and showing affection to women, would face fresh scrutiny in the 2020 campaign. In some cases, Biden’s policy positions, such as his support for the 1994 crime bill that is blamed for mass incarcerations of minorities, are out of step with a party that has shifted to the left. But at other moments, like when he touts his ability to forge compromises with Republicans, he can appear to be speaking about a political era that many Democrats believe no longer exists.

Even before Flores made her allegations, some Democrats were wondering whether Biden was meant for this moment. His team was widely panned following reports that they were considering tapping a younger Democrat or a minority like 2018 Georgia gubernatorial candidate Stacey Abrams as a running mate early in the primary in an attempt to counteract questions about Biden’s age.