Thousands of pro-life activists participated in candlelight vigils outside Planned Parenthood clinics throughout the nation over the weekend, some in response to the new film Unplanned.

“This past weekend’s National Pro-Life Candlelight Vigil was an outstanding success,” said Eric Scheidler, Pro-Life Action League executive director, in an email statement to Breitbart News. “In all, 166 vigils were organized at Planned Parenthood facilities in 40 states in six time zones.”

Some remarks from the Nationwide Candlelight Vigil at Planned Parenthood centers—more than 150 nationwide!

Scheidler, whose group was one of three pro-life organizations directing the event, estimated total turnout to be over 10,000 participants in the vigils, including many first-time activists.

“Many said that they were motivated by seeing the movie Unplanned, which tells the story of Abby Johnson, a Planned Parenthood manager turned pro-life activist,” he added. 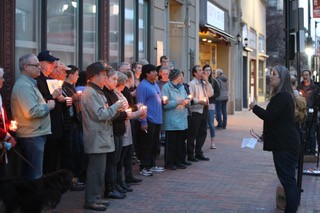 According to Scheidler, the largest reported crowds were 350 in Aurora, Illinois; 300 in Tampa, Florida; and 275 in Kalamazoo, Michigan.

Guest speakers at the vigils included local clergy and women who shared their stories of regret about their abortions.

In Michigan, Msgr. Robert McClory, pastor of the National Shrine of the Little Flower Basilica in Royal Oak, noted the irony that, due to environmental laws, it is a crime to kill certain animals or disturb their eggs. Humans, however, are not provided with the same protection, he said.

“How it is in the environmental area we say that even an egg is of course protected,” he asked, reported pro-life media LifeSiteNews. “Whether that egg is viable or not doesn’t matter. That egg is worthy of protection, included in the protection of the law … and yet, for the littlest ones those fertilized eggs from the moment of conception – society looks the other way.”