This week, socialist Sen. Bernie Sanders (I-VT) endorsed a plan that would allow felons serving time behind bars the right to vote from their prison cells.

“So, I believe people who commit crimes, they pay the price and they get out of jail, they certainly should have the right to vote,” Sanders said during a town hall. “But, I believe even if they are in jail, they’re paying the price to society, but that should not take away their inherent American right to participate in our democracy.”

Initially, Sen. Kamala Harris said, “I think we should have that conversation” when asked about allowing convicted criminals to vote from their cells, but she has since backtracked on that statement, declaring that she actually opposes giving felons in prison the right to vote.

“Do I think that people who commit murder and people who are terrorists should be deprived of their rights, yes I do,” Harris said.

“Being an American citizen and having the right to vote is something that we must never, ever give up on,” Sanders said.

In total, the Sanders-endorsed plan would allow more than 1.6 million felons in federal, state, and local prisons the right to vote from their cells — including some 183,000 convicted murderers and 164,000 convicted rapists.

Here, Breitbart News details 15 famous serial killers, murderers, rapists, kidnappers, and child sex abusers who would be allowed to vote from their cells under Sanders’ plan: White supremacist and mass murderer Dylann Roof, 25-years-old, was convicted in January 2017 and sentenced to death after being found guilty on 18 counts of murder for killing nine black Americans in the AME Church in Charleston, South Carolina, on June 2015.

Roof is currently on death row at Terre Haute Federal Prison in Indiana. 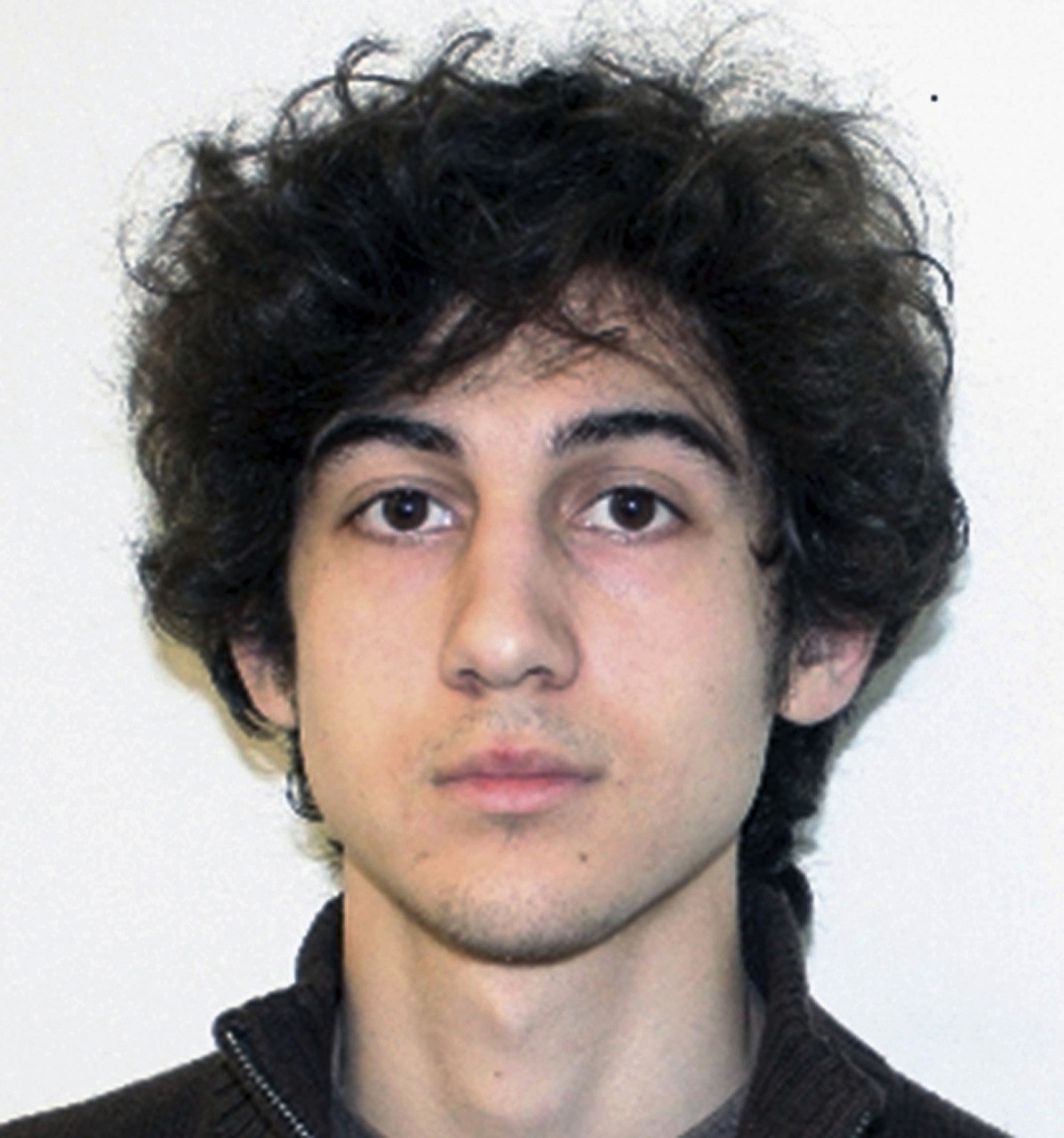 This file photo released April 19, 2013, by the Federal Bureau of Investigation shows Dzhokhar Tsarnaev, convicted of carrying out the April 2013 Boston Marathon bombing attack that killed three people and injured more than 260. Tsarnaev has been on federal death row since his 2015 conviction, and at age 24 is being held in 2018 at the supermax prison in Florence, Colo. Jurors approved death by lethal injection, but years of appeals await. (FBI via AP, File)

Terrorist Dzhokhar Tsarnaev, a 25-year-old naturalized U.S. citizen, was convicted in May 2015 and sentenced to death after being found guilty of placing a pressure cooker bomb at the Boston Marathon in April 2013 to murder three Americans and injure more than 260 others.

Tsarnaev is currently on death row at a supermax federal prison in Florence, Colorado. 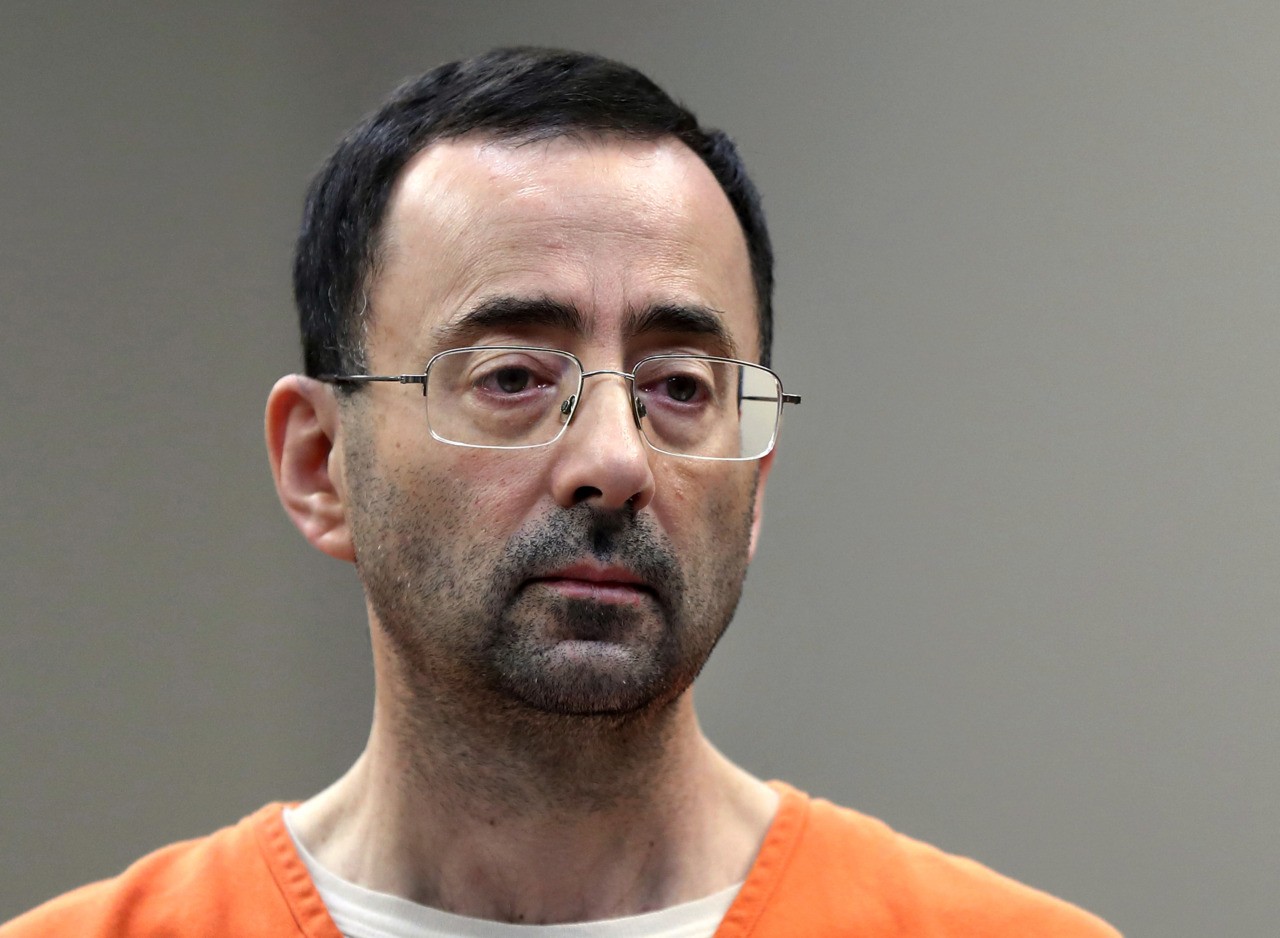 Serial child molester Dr. Larry Nassar, 55-years-old, was convicted in January 2018 and sentenced to 40 to 175 years in prison after being found guilty of sexually molesting and abusing more than 150 young girls on the U.S. Olympic Gymnastic Team as well as other girls.

In many cases, victims described how Nassar would molest them while their parents were in the room. Nassar is currently serving his sentence at the U.S. Penitentiary Coleman II, a high-security federal prison. 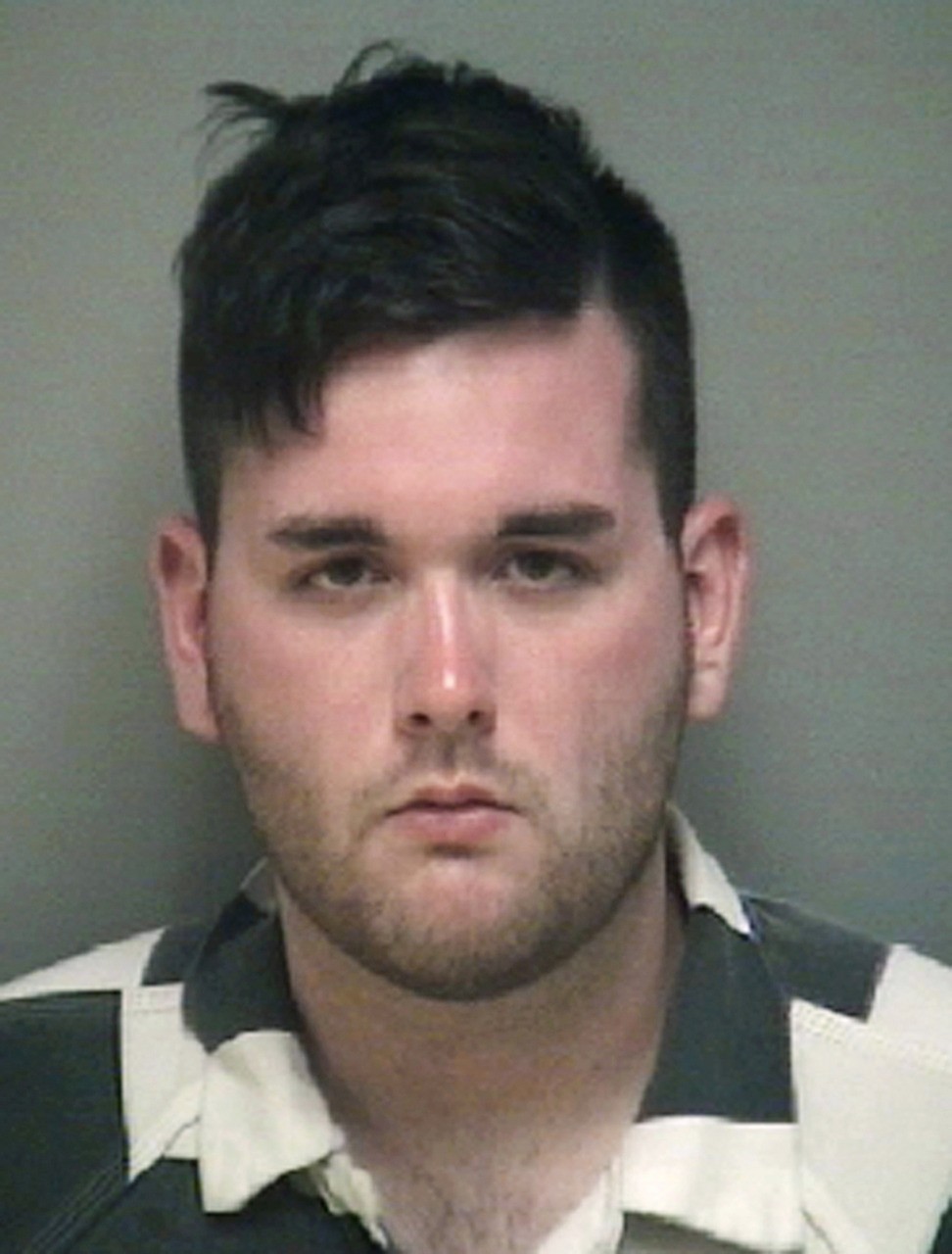 This undated file photo provided by the Albemarle-Charlottesville Regional Jail shows James Alex Fields Jr., convicted of first-degree murder for driving his car into counter-protesters at a white nationalist rally in Virginia. A sentencing hearing has been delayed for Fields. A sentencing hearing was originally scheduled for March 29. But an online court docket entry shows the hearing has been postponed until July 15. (Albemarle-Charlottesville Regional Jail via AP, File)

White supremacist murderer James Alex Fields Jr. was convicted of first-degree murder and sentenced to life in prison after driving his car into a crowd of people at a counter-protest to the 2017 “Unite the Right” rally. Fields, the jury found, had revved up and driven his car into the crowd that ultimately left 32-year-old Heather Heyer dead and multiple others injured.

It is unclear which state prison Fields is serving his life sentence. 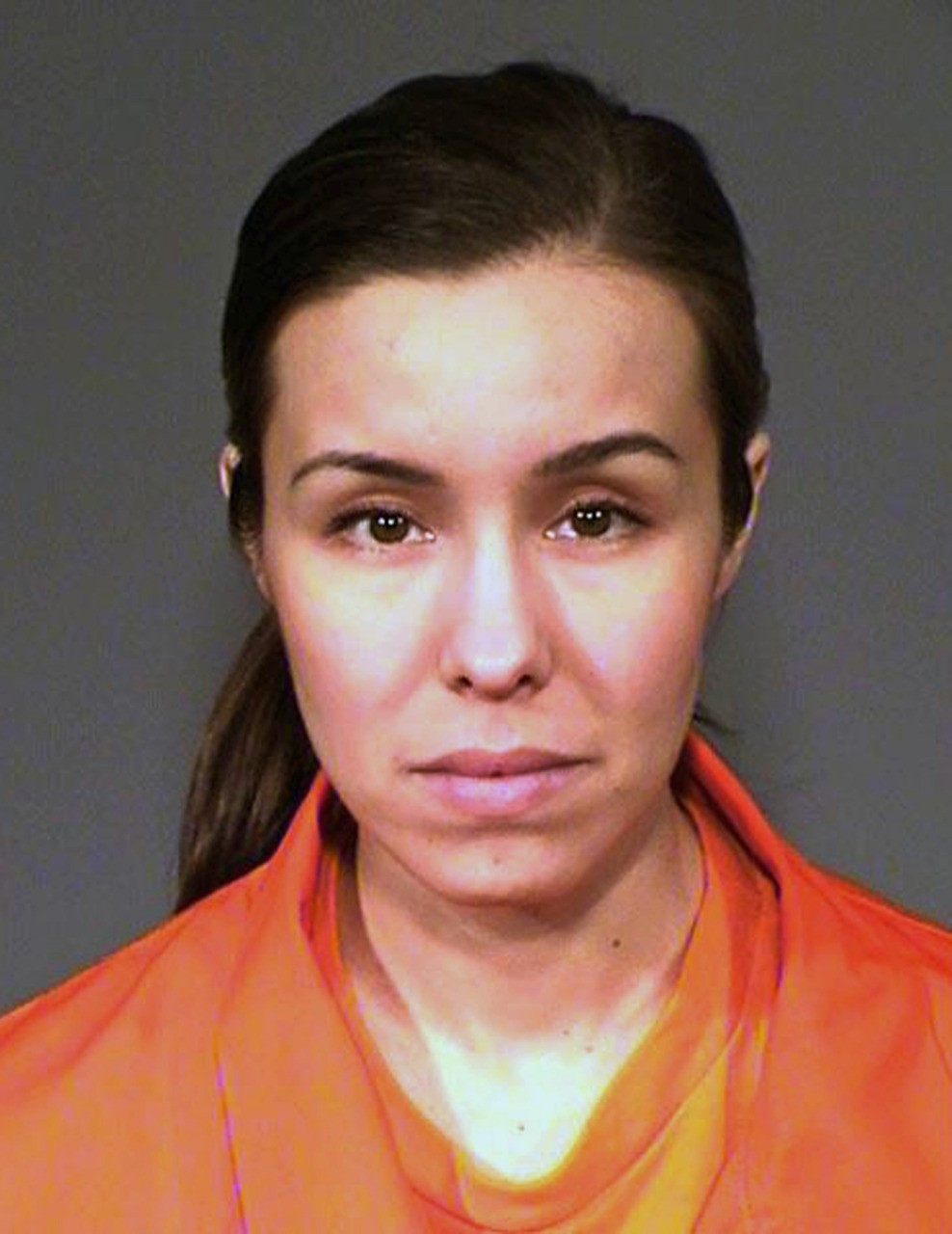 This undated file photo provided by the Arizona Department of Corrections shows Jodi Arias. Arias is asking an appeals court to overturn her murder conviction in the 2008 death of her former boyfriend, saying a prosecutor’s misconduct and a judge’s failure to control news coverage during the salacious case deprived her of the right to a fair trial. In the appeal released Friday, July 6, 2018, Arias’ lawyers said prosecutor Juan Martinez improperly questioned witnesses, ignored rulings on evidence and courted news coverage. (Arizona Department of Corrections via AP, File)

First-degree murderer Jodi Arias, 38 years old, was convicted in 2013 and sentenced in 2015 to life in prison for murdering her ex-boyfriend, 30-year-old Travis Alexander, in a brutal attack at his Mesa, Arizona, home. Arias, the jury concluded, had stabbed Alexander up to 30 times, slit his throat, and shot him in the head while he was in the shower.

Arias is currently serving her life sentence at the Arizona State Prison Complex. 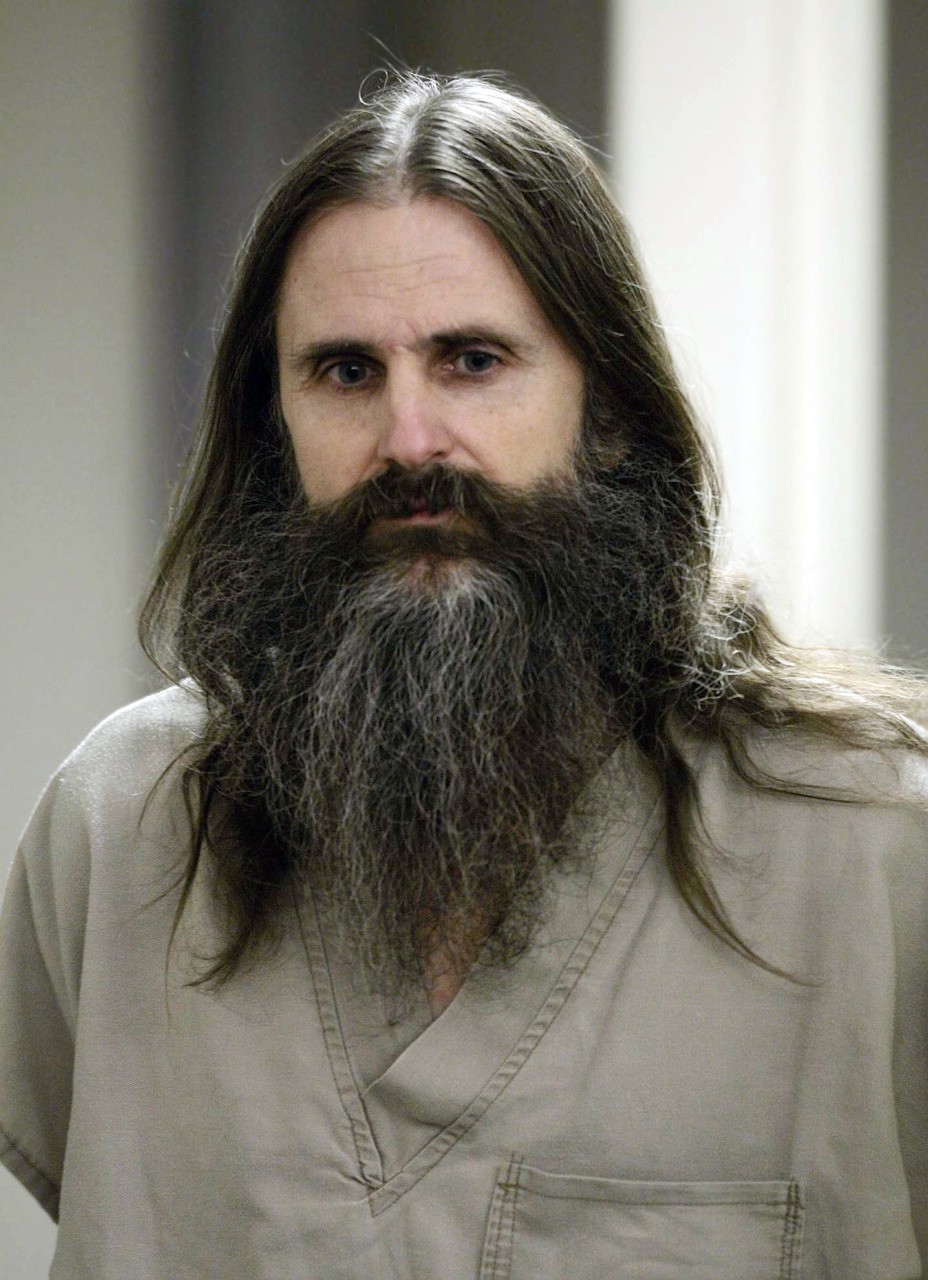 Kidnapper and child rapist Brian David Mitchell was convicted in May 2011 and sentenced to life in prison for abducting, raping, and holding then-14-year-old Elizabeth Smart captive between 2002 and 2003. Mitchell kidnapped Smart in June 2002 from her Salt Lake City, Utah, home and held her against her will in wooded encampments and often raped her multiple times a day. 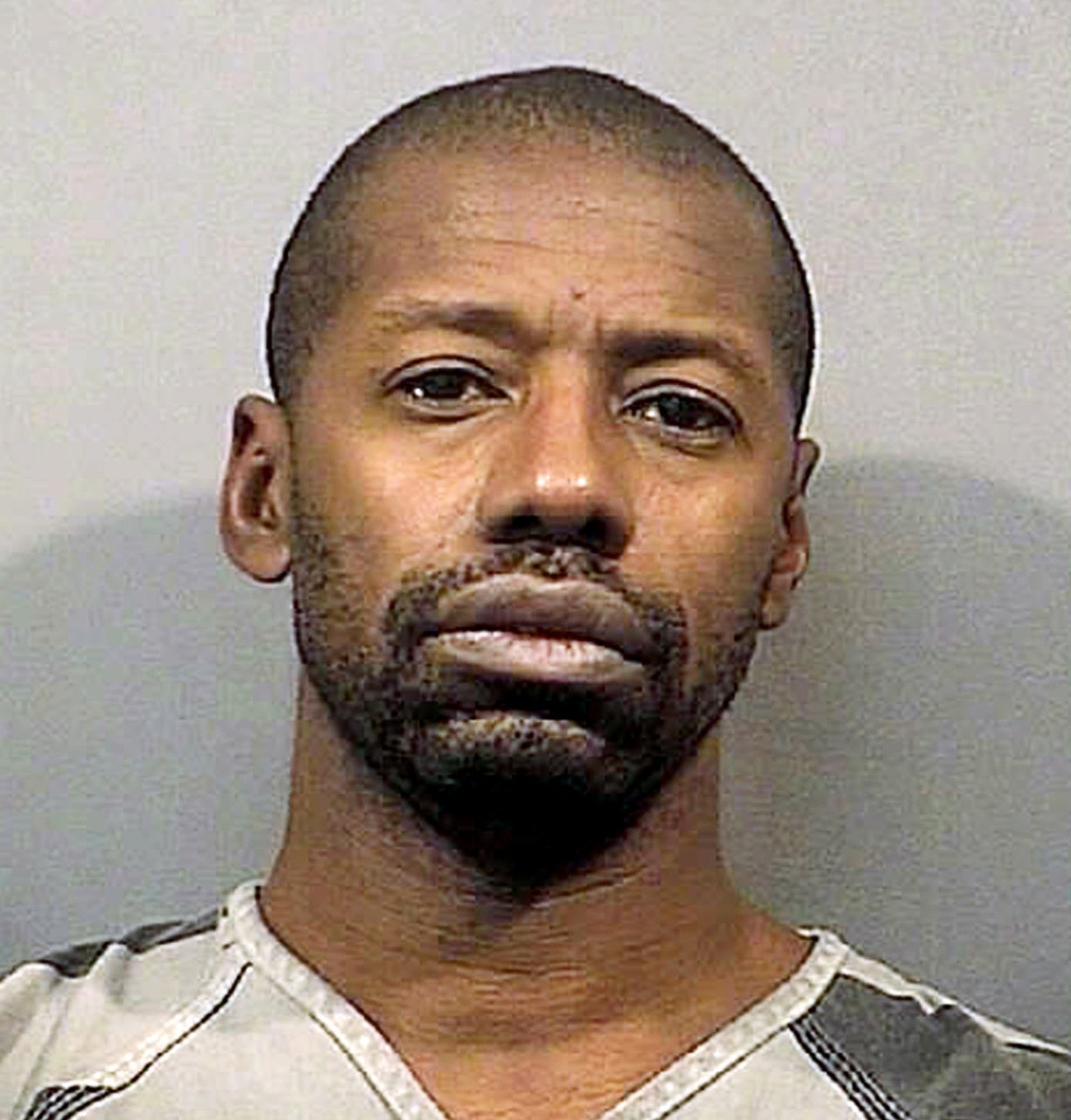 This file photo provided by the Lake County, Ind., Sheriff’s Department shows Darren Vann, of Gary, Ind. Vann, a former Marine who admitted to killing seven women in a plea deal with Indiana prosecutors, was sentenced Friday, May 25, 2018, to seven life sentences. In entering the plea deal, Vann was spared a death sentence. (Lake County Sheriff’s Department via AP, File)

Serial killer Darren Deon Vann was convicted in May 2018 and sentenced to life in prison for murdering seven women across Indiana in the year 2014. Vann admitted in his plea deal that he strangled each of the women to death after having sex with them and left six of the seven women’s dead bodies in abandoned homes in Indiana.

Vann’s youngest victim, Afrikka Hardy, was just 19 years old. At the time of her murder, Vann left Hardy’s body in the bathtub of a Motel 6 in Hammond, Indiana. It is unclear where Vann is serving his life sentence. 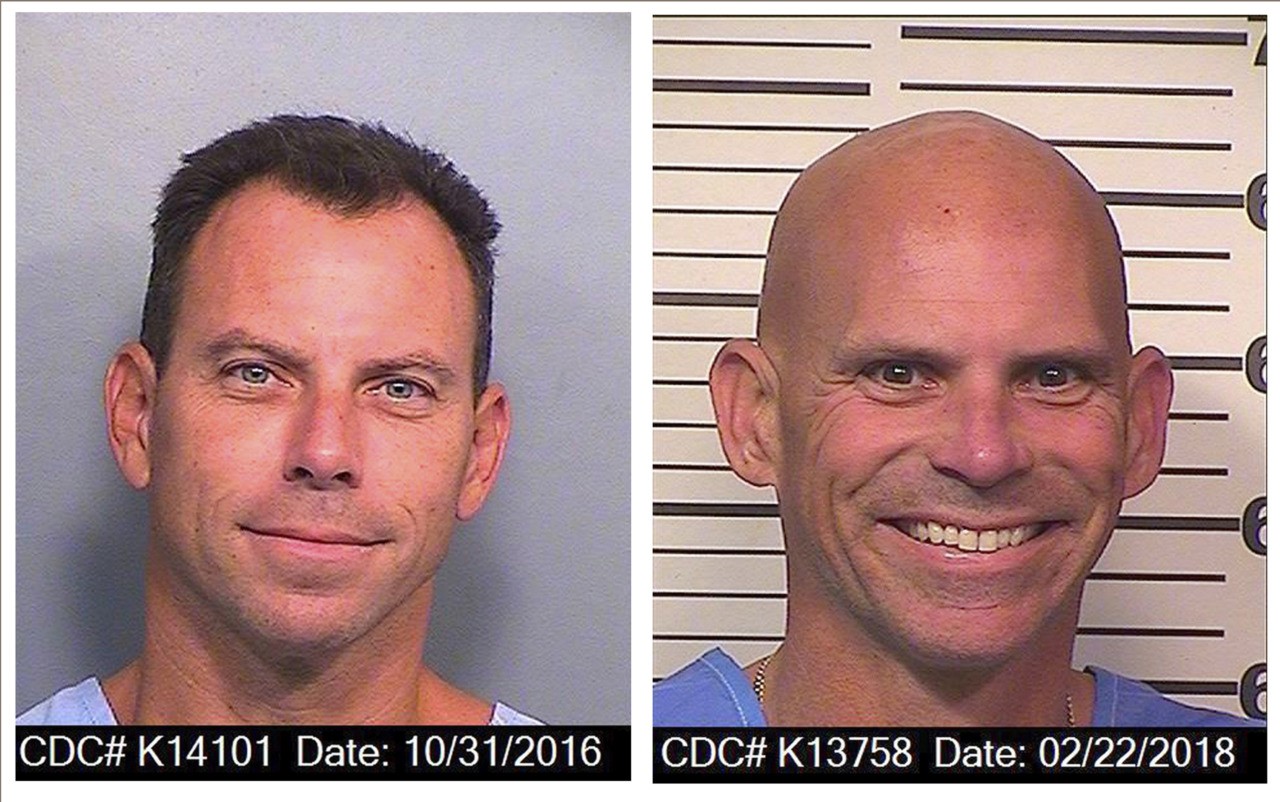 Murderers Lyle and Erik Menendez, 50 and 47 years old, were convicted in 1989 and sentenced each to life in prison for murdering their wealthy parents, Jose and Kitty Menendez. In their famous murder trial, the jury ultimately found that Lyle and Erik had shot and killed their parents with a shotgun in their Beverly Hills, California, home.

The Menendez brothers alleged that they murdered their parents because their father had sexually abused Erik for years, and they worried that if the alleged abuse became public knowledge, their parents would have killed them.

The Menendez brothers are both serving their life sentences at Richard J. Donovan Correctional Facility in San Diego County, California. 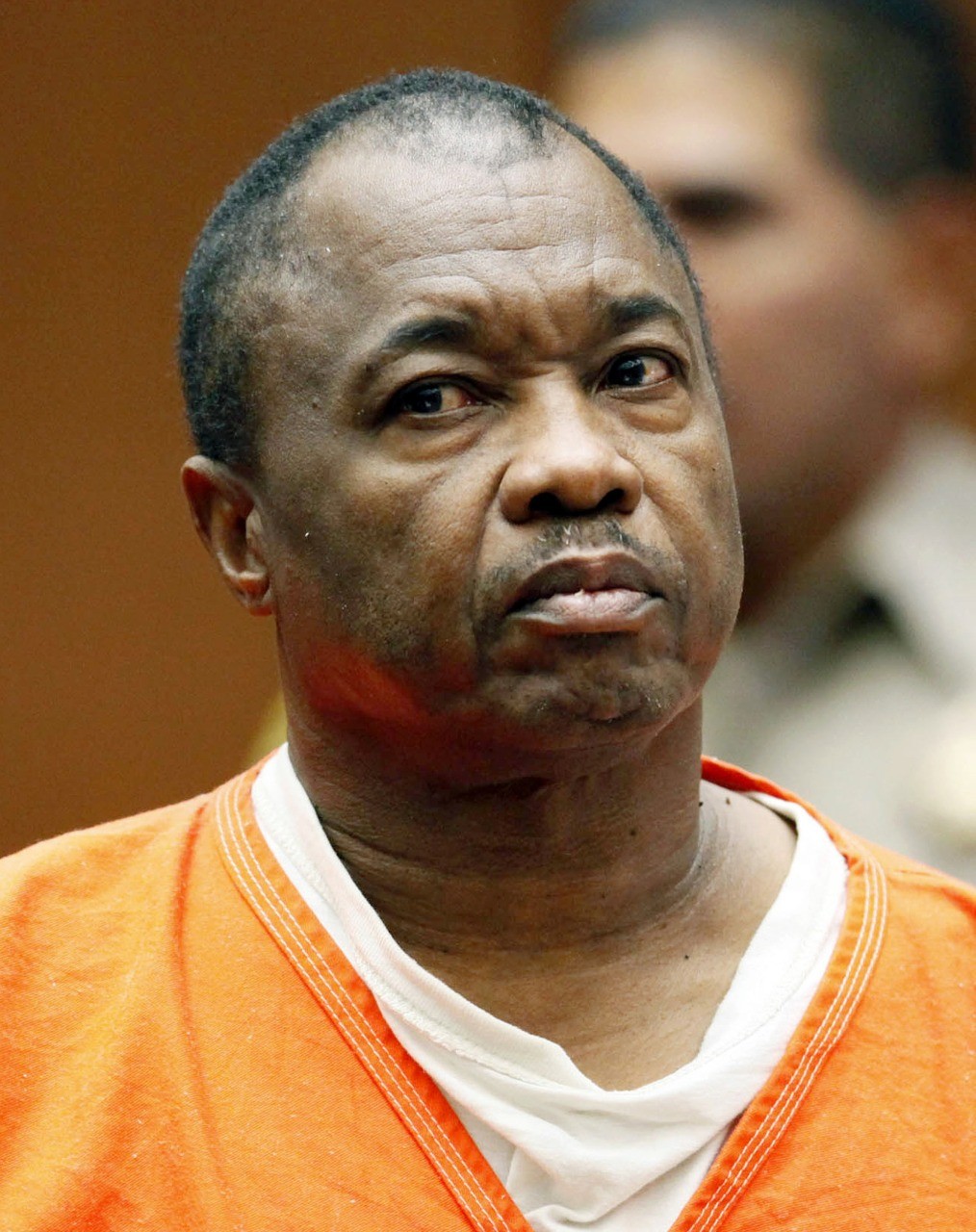 Serial killer Lonnie David Franklin Jr., 66 years old, was convicted in 2016 and sentenced to death for murdering ten women, one of which was a teenage girl, between 1985 and 2007. Dubbed the “Grim Sleeper” because he allegedly did not commit any murders between 1988 and 2002, Franklin Jr. may have murdered at least 25 women, according to prosecutors.

In one of Franklin Jr.’s brutal killings, he murdered 25-year-old Janecia Peters on New Year’s Day in 2007 and put her body in a trash bag, then disposed of her remains by placing her in a garbage bin. 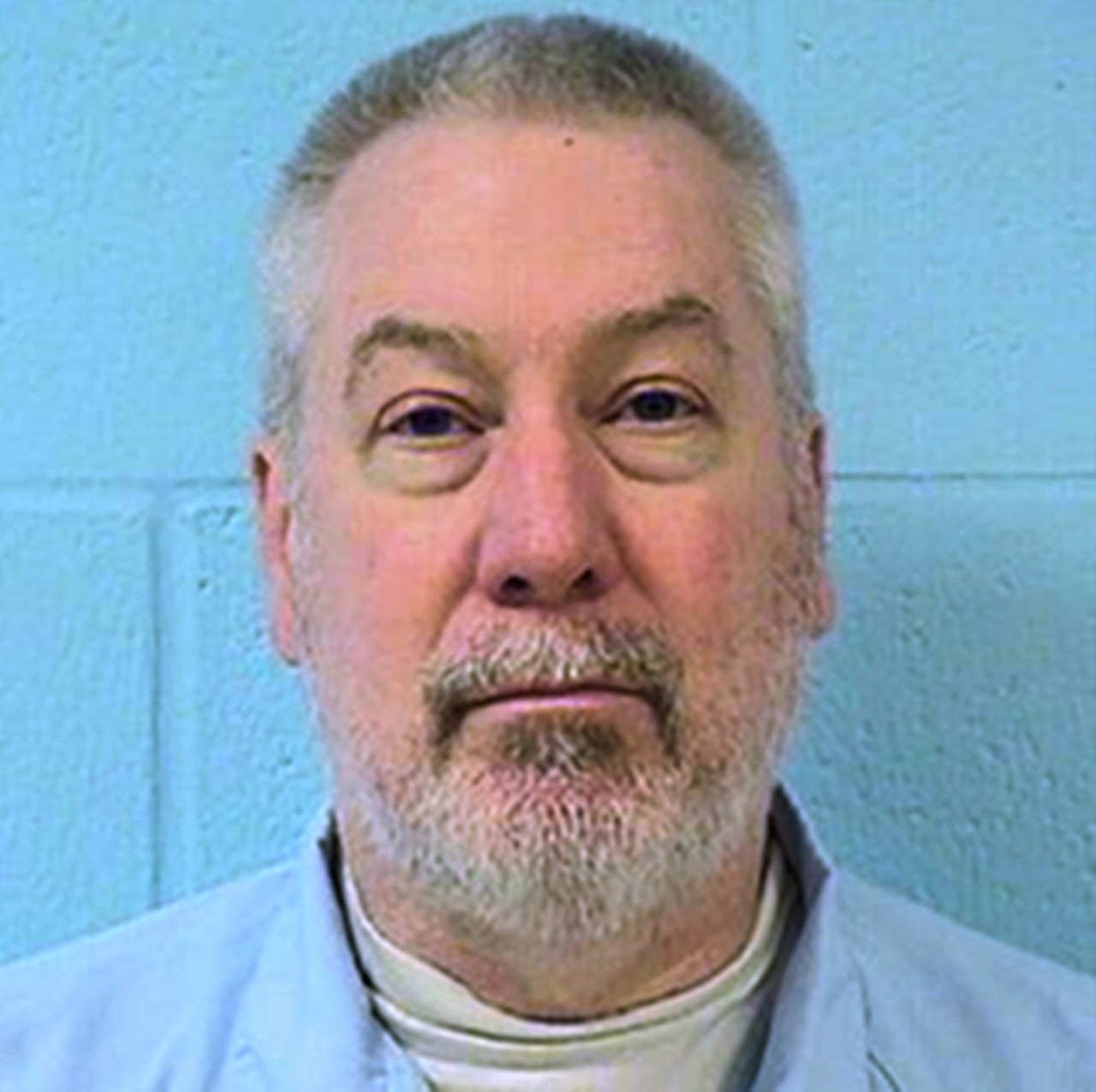 This undated file photo provided by the Illinois Department of Corrections shows former Bolingbrook, Ill., police officer Drew Peterson. The Bolingbrook Police Pension Board voted unanimously Wednesday, June 1, 2016 to end Peterson’s $79,000-a-year pension. Peterson was convicted of killing his third wife, Kathleen Savio, and then convicted of trying to hire someone to kill the prosecutor in that case. His attorneys say the pension money supports two of his children. (Illinois Department of Corrections via AP, File)

Murderer Drew Peterson, 65 years old, was convicted and sentenced to 38 years in prison in 2013 after murdering his third wife, Kathleen Savio, in 2004. According to prosecutors, Peterson drowned Savio in her bathtub following their divorce. The case swept national headlines in 2007 when Peterson’s fourth wife, Stacy Peterson, went missing and has still never been found.

Peterson, most recently, was sentenced to an additional 40 years in prison for attempting to carry out a murder plot against Will County, Illinois, attorney James Glasgow who helped convict the wife-killer.

Peterson is currently serving his sentence at the Terre Haute Federal Prison in Indiana. 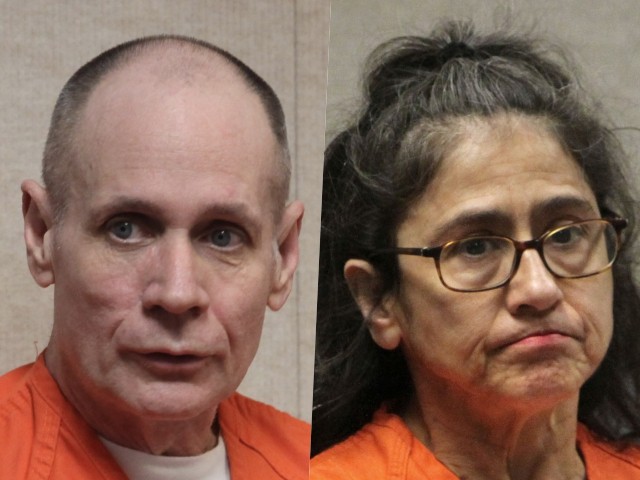 Phillip Garrido (left) and Nancy Garrido (right) were both convicted for abducting and holding Jaycee Dugard against her will at their home for 18 years. (AP Photos/Rich Pedroncelli)

Captors Phillip Greg Garrido and Nancy Garrido, 68 and 63 years old, were convicted in 2011 after holding Jaycee Dugard against her will in a tent in their backyard for nearly 20 years. Phillip Garrido, who kidnapped Dugard when she was 11 years old in 1991, was sentenced to life in prison for kidnapping and raping the girl.

Nancy Garrido received a sentence of 36 years to life in prison for aiding in Dugard’s kidnapping and rapes. California officials did not find Dugard until 2009 living the Garridos’ backyard with her two daughters whom she had by Phillip Garrido. 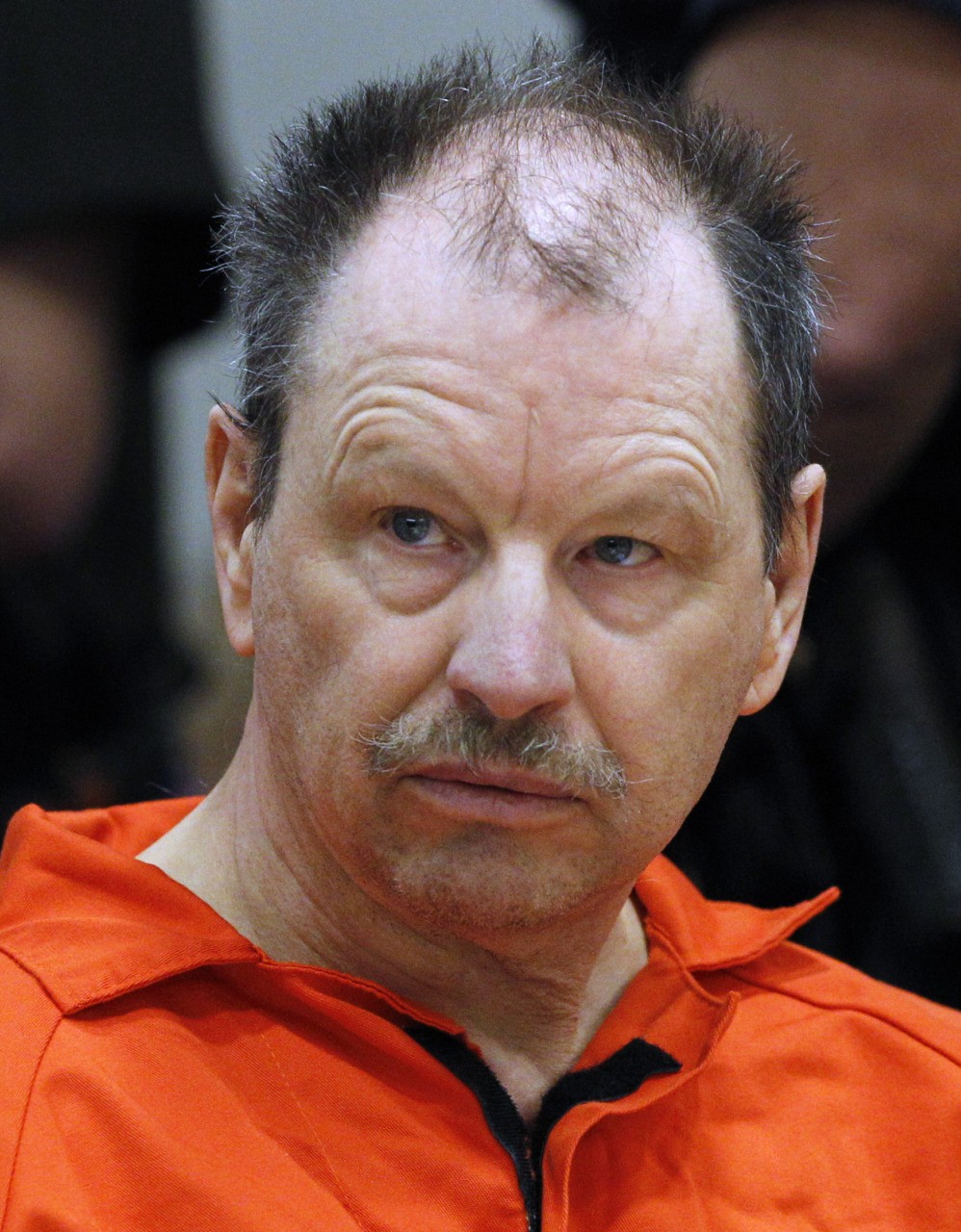 Green River Killer Gary Ridgway listens during his arraignment on charges of murder in the 1982 death of Rebecca “Becky” Marrero, Friday, Feb. 18, 2011, at the King County Regional Justice Center in Kent., Wash. Ridgway already confessed to killing Marrero as part of a 2003 plea deal that spared him the death penalty. (AP Photo/Elaine Thompson)

Serial killer Gary Ridgway, 70-years-old, was convicted in 2003 and sentenced to life in prison after murdering at least 49 women in a nearly 20-year span between 1982 and 2003. Ridgway became known as the “Green River Killer” because he would dump his victims’ bodies near the Green River in the Seattle area after strangling them to death.

In many cases, prosecutors said Ridgway would return to his victims’ bodies after killing them and rape them. Ridgway has confessed to murdering at least 70 women — more victims than any other serial killer in American history. 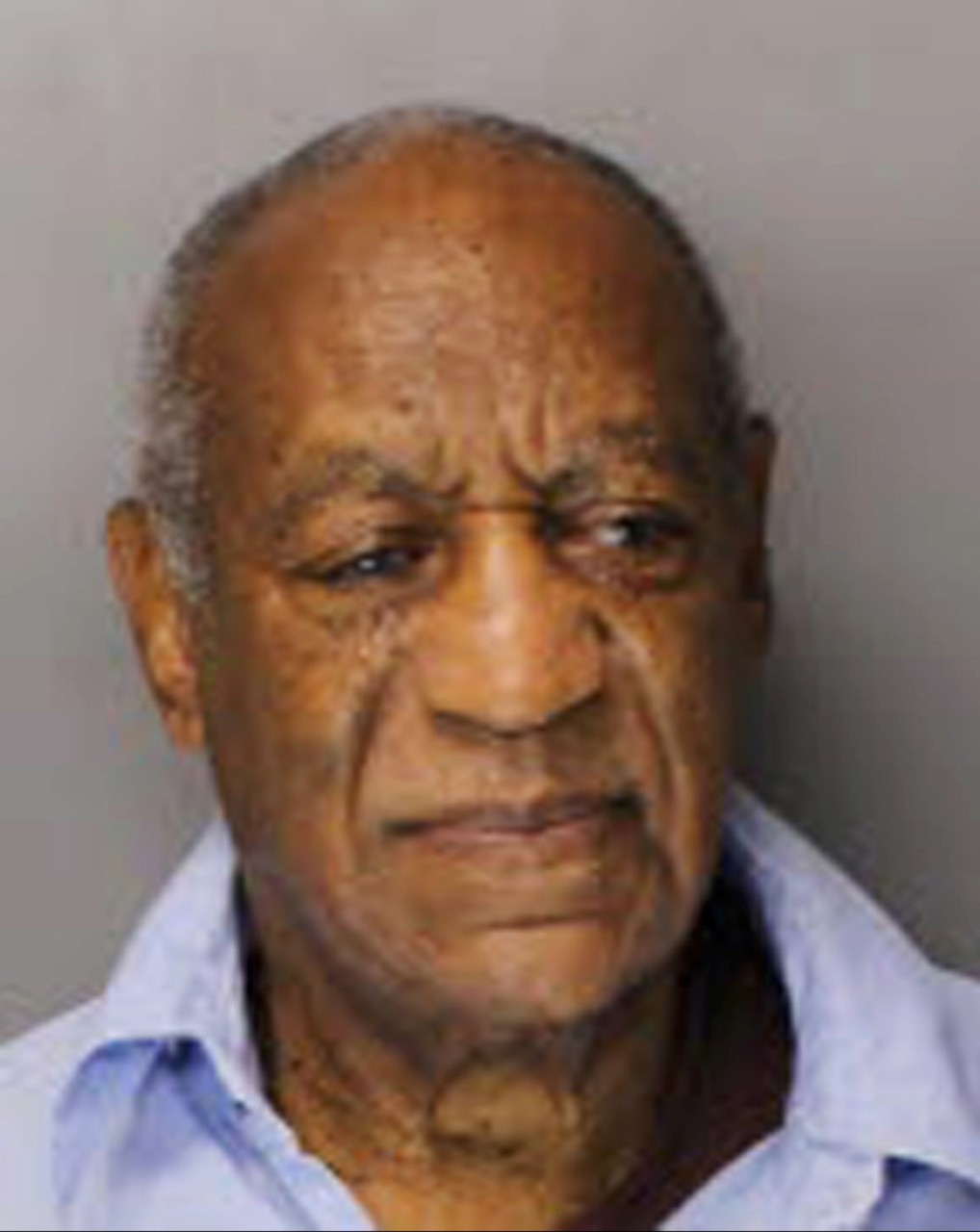 Serial sexual assaulter Bill Cosby, the famed 81-year-old actor and comedian, was convicted and sentenced to three to ten years in prison last year after drugging and sexually assaulting a woman at his Philadelphia, Pennsylvania, home in 2004.

In total, more than 60 women have said they were sexually assaulted by Cosby throughout the course of his career. His alleged victims have called him a “serial rapist” who led a “double life as a sexual predator.”

Cosby is currently serving his sentence at the Montgomery County Correctional Facility in Pennsylvania.