Sen. Steve Daines (R-MT) told Breitbart News in an exclusive interview Wednesday that due to Montana’s illicit methamphetamine coming from Mexico, Montana is a “northern border state” with a “southern border problem.”

Sen. Daines spoke with Breitbart News regarding Montana’s methamphetamine problem and America’s “porous” southern border. Unlike many parts of the country that battle with the harmful effects of opioids, Montana continues to combat the rising impact of methamphetamine, most of which come from Mexico.

Sen. Daines sent a letter to the U.S. Customs and Border Patrol (CBP) in April requesting that the organization provide recommendations on how they can better tackle Montana’s meth problem coming from Mexico. The Montana conservative noted how the state has witnessed a 475 percent increase in methamphetamine cases from 2011 to 2017.

Over the last several months, Daines has met with state and federal law enforcement and visited healthcare centers helping Montanans dealing with citizens addicted to methamphetamines.

Daines explained, “Over the last couple of months, I have been spending a lot of time traveling to virtually every corner of Montana, hearing stories of what’s happening with methamphetamines, it is a crisis. Our U.S. Marshall told us from Billings [Montana], told us that our meth seized last year in Montana doubled from the year before.”

Good discussion in Great Falls with law enforcement and drug treatment and prevention specialists. Montana’s meth crisis is an epidemic we must work together to combat. #mtpol pic.twitter.com/dYBI5hAs1L

“In every county in Montana, every member of law enforcement is telling us that this is a crisis. We are seeing this meth coming from Mexico. It’s very different from the meth fight we had 15 years ago in Montana,” Sen. Daines continued.

In February, Daines visited the Kalispell Regional Medical Center, where they treat drug-addicted babies, often from meth that comes from Mexico.

Was glad to visit Kalispell Regional Medical Center today. Their NICU, where they treat drug-addicted babies, is doing incredible work for our state while we face this devastating drug crisis. #mtpol pic.twitter.com/xh0wrl6zj4

Daines traveled with Sen. David Perdue to the southern border and met with law enforcement. Daines said that the “southern border” crisis was “staggering.”

Attached is a picture of Sens. Daines and Perdue at the southern border speaking with law enforcement: 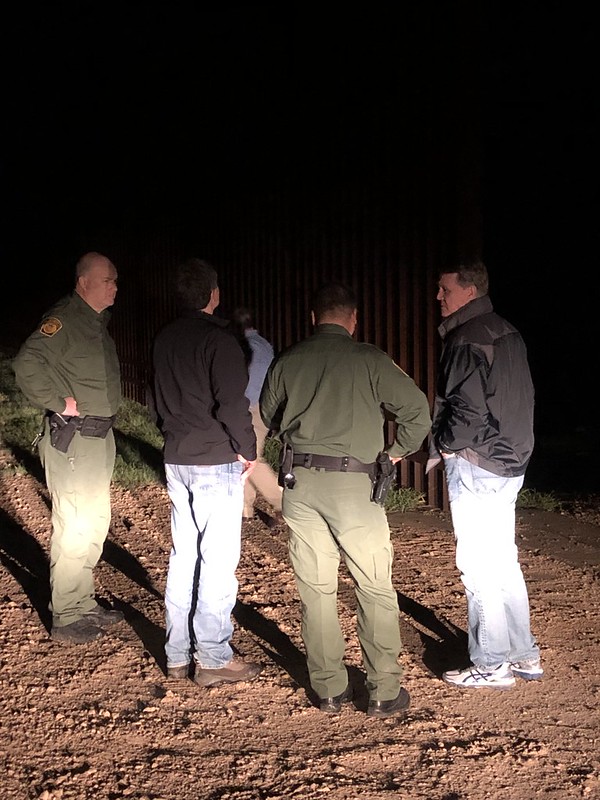 Sen. Daines noted how the CBP resources seemed “stretched” by the border crisis. One law enforcement officer estimated to Sen. Daines that it remains hard to calculate, but they believe that they only stop roughly “seven percent” of drugs that cross the border.

“The physical barrier will direct the traffic into pinch points, and we have a better chance apprehending illegals and drugs, I mean that’s just common sense,” Daines said.

“The southern border is so porous, and I was struck by how easy it is to cross whether the cartels are moving human beings across, by the way, which is a huge multi-billion-dollar business and moving drugs across also a multi-billion dollar business,” Daines continued.

Sen. Daines said, “There’s so much work to do, and we need to continue to support President Trump in what he’s doing to secure the southern border.”

“There’s probably a four-prong approach. First, we have to change the law that changes the incentive for the catch and release, the Flores issue for those coming into the United States. Second, is on the enforcement and security side, that’s securing the southern border and the physical barrier technology, that’s boots on the ground, as well as resources for our law enforcement so we can continue this fight through the rule of law. There’s an education component:we need to talk to our grade school kids about the scourge of meth. That’s on the demand side when I hear stories about 11-year-olds addicted to meth, that tells you we can’t start too early and the treatment side to those who are addicted they want to get better. They are despondent with their addiction, and they want help, and we need to find a way who need help with their addiction,” Daines concluded.