A military prosecutor seeking to put Navy SEAL Eddie Gallagher behind bars for allegedly killing a terrorist while deployed to Iraq in 2017 took the unusual step of sending emails to defense lawyers that contained tracking software in an apparent attempt to monitor their communications, according to a lawyer who discovered the software.

Gallagher’s lead defense lawyer, Tim Parlatore, who received and discovered the software, said the move is unethical and amounts to unlawful search.

“The idea of prosecutors taking an active role in surveilling defense counsel — that’s something that’s disqualifying in this case,” he told Breitbart News in a phone interview on Tuesday evening.

Parlatore said Navy Cmdr. Christopher Czaplak, the lead prosecutor in the case, sent him and his entire defense team emails on May 8 — the day Parlatore visited Washington, DC, to show a video to members of Congress that the defense team believes will help exonerate Gallagher.

Parlatore said he noticed right away that the emails contained a logo that he identified as tracking software, since he had dealt with it on another unrelated case.

The logo, of an American flag with a bald eagle perched on the scales of justice, was particularly suspicious since logos usually appear right below the signature line, but this logo was at the very bottom of the email, below an email disclaimer, he said.

“I noticed that the emails looked different than they always have before. There was this little embedded image down at the bottom [of] the email,” he said.

Parlatore sent an image of the logo to Breitbart News: 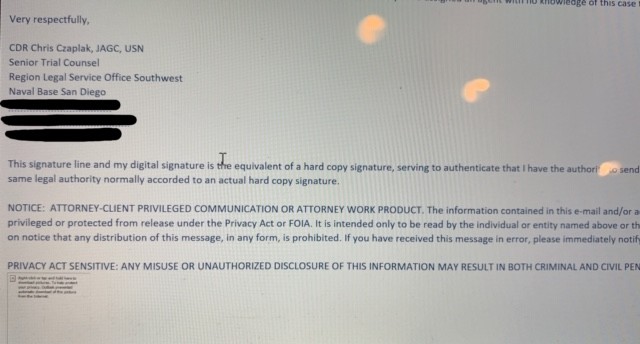 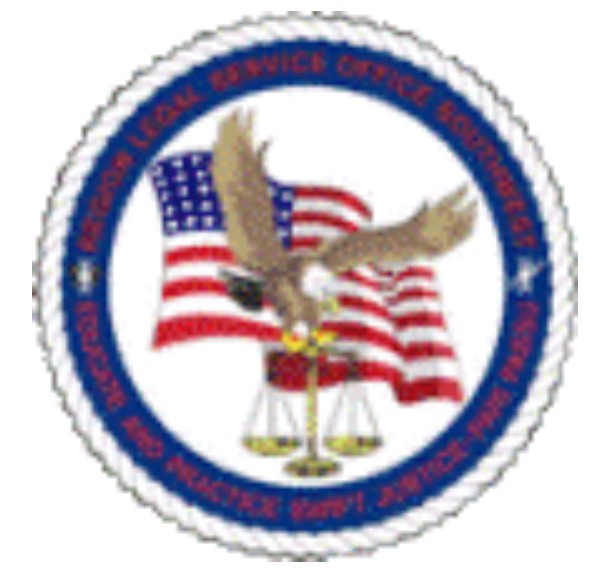 Photo of the logo embedded in the email allegedly with tracking software. (Credit: Tim Parlatore)

Parlatore said the logos, if downloaded, contained software that would connect back to the sender’s server and relay the sender information such as where the email was opened, how long the reader stayed connected, whether any links were clicked in the email, and other information.

It would also show who the email was forwarded on to, and the person receiving the forwarded email would also send back that information to the server, he said.

Parlatore said he contacted Czaplak immediately after receiving the emails to let him know there was tracking software them. He said Czaplak said he would look into it right away.

Parlatore said an email with tracking software was also sent to Carl Prine, an editor for the Navy Times, who has reported extensively on the case.

Andrew Tilghman, the executive editor for Military Times, which includes the Navy Times, said in a statement  “These allegations, if true, are a troubling assault on journalists and the work we do.”

“These are not classified documents that we’re talking about, so it’s especially disturbing to hear that the federal government is taking these extreme measures to secretly surveil the activities of our reporter and violate their constitutional rights against unlawful search. This is potentially unlawful and should be thoroughly investigated,” Tilghman added.

Prine has been reportedly sidelined from reporting on the case, since he is now a possible target of the investigation.

Parlatore said he suspects that the email containing the notification of the death threat was “bait” from the prosecution, since right after he received it, he got a call from Prine about it.

Parlatore said Czaplak also sent the emails to the defense team for another Navy SEAL, Lt. Jacob Portier, who is accused of failing to report Gallagher’s alleged crimes and other allegations.

Asked for comment on whether Czaplak sent an email with tracking software to the defense teams and a journalist, Navy Region Southwest Spokesman Brian O’Rourke told Breitbart News, “The investigation into the leaks of protected documents in the Chief Gallagher case is still ongoing. It would be inappropriate for me to comment at this time.”

Parlatore said Czaplak needs to face discipline from the New York State Bar Association, as well as from the Navy. “He acted in an unethical manner,” he said.