House Democrats held a press conference on Tuesday at the Capitol to support the Voting Rights Advancement Act, but almost every speaker mentioned the 2018 gubernatorial race in Georgia and blamed Republicans and, in particular, Republican Gov. Brian Kemp, who defeated Democrat Stacey Abrams, for voter suppression.

Rep. Terri Sewell (D-AL) introduced the bill in the House along with Sen. Patrick Leahy’s (D-VT) companion bill in the Senate in February. The legislation would restore the Voting Rights Act of 1965 to put back into the law the inclusion of pre-clearance rules that gave the Department of Justice jurisdiction over state and local governments’ ability to change voting laws.

The U.S. Supreme Court removed that portion of the VRA in 2013 in the Shelby vs. Holder decision.

“Stacey Abrams was the victim of much of what Georgia did to restrict the vote and it was done intentionally to limit the African American vote and not elect a Democrat and particularly an African America woman,” Rep. Steve Cohen (D-TN) said at the press conference without naming Kemp by name. 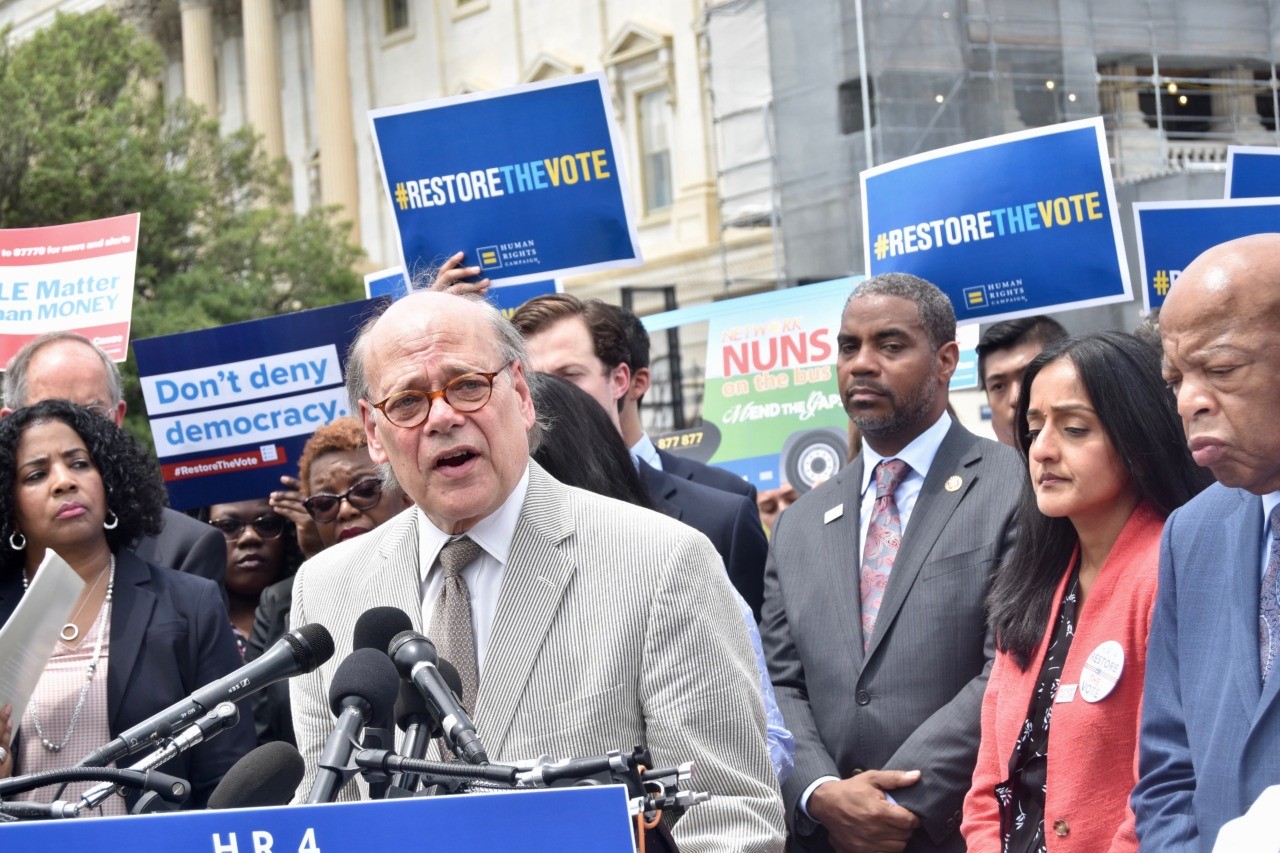 Rep. Steve Cohen (D-TN) said at a press conference on Tuesday at the Capitol that the 2018 election in Georgia was rigged against gubernatorial candidate Stacey Abrams because she is black. (Penny Starr/Breitbart News)
“The person that was most responsible for those laws and taking people off the voting rolls was the Secretary of State in Georgia who happened to be Stacey Abrams opponent and is now the beneficiary of all those nefarious actions serving as governor of the state of Georgia,” Cohen said.

“That was not an accident,” Cohen said. “It was intentional.”

“It’s about keeping black people down,” Cohen said. “And that’s what they have effectively done with these changes in laws to change voting places, to change days of voting, to have photo voter IDs and all other kind of laws to limit the impact of African Americans and voting in the South.”

“We still have modern-day forms of voter suppression and we House Democrats say, ‘No — no more,’” Sewell said at the press conference. “The November 2018 midterm elections showed just how urgent the need is to protect our right to vote.”

Sewell and Rep. Jerrold Nadler (D-NY) both accused Kemp of putting 53,000 voter registration “on hold” because of what they said were minor “misspellings” of names or lack of hyphens in hyphenated names.

Sewell said Republicans are at fault for voter suppression.

“We want to make sure that Republicans know that it’s unacceptable, that in 2019 they’re not supporting voting rights,” Sewell said.

Vanita Gupta, president and CEO of the Leadership Conference on Civil and Human Rights, who served in the Department of Justice’s Office of Civil Rights until 2017, said there was voter suppression in the 2016 election of President Donald Trump.

“In fact, one million Americans who tried to vote is 2016 could not because of barriers like strict voter ID laws and registration challenges,” Gupta said.

Abrams was the only witness at a House Subcommittee on the Constitution, Civil Rights and Civil Liberties hearing on Tuesday focused on the Shelby vs. Holder decision.