Two-in-four Democrats strongly oppose the federal enforcement of judges’ deportation orders, according to a poll by Morning Consult.

The poll helps to explain why many of the Democrats’ competing presidential candidates vocally oppose deportations and the enforcement of the nation’s immigration laws — despite the dramatic effort by many foreigners to move into Americans’ workplaces, schools, and neighborhoods.

Fifty-one percent of registered voters support President Donald Trump’s policy of forcibly deporting the illegals with deportation orders from judges, according to the July 12-14 poll of 1,984 registered voters.

Thirty-two percent strongly support the policy, and only 21 percent of all voters strongly oppose the enforcement policy.

A large share — 13 percent — declined to answer, suggesting that Trump’s support may be well above 51 percent. 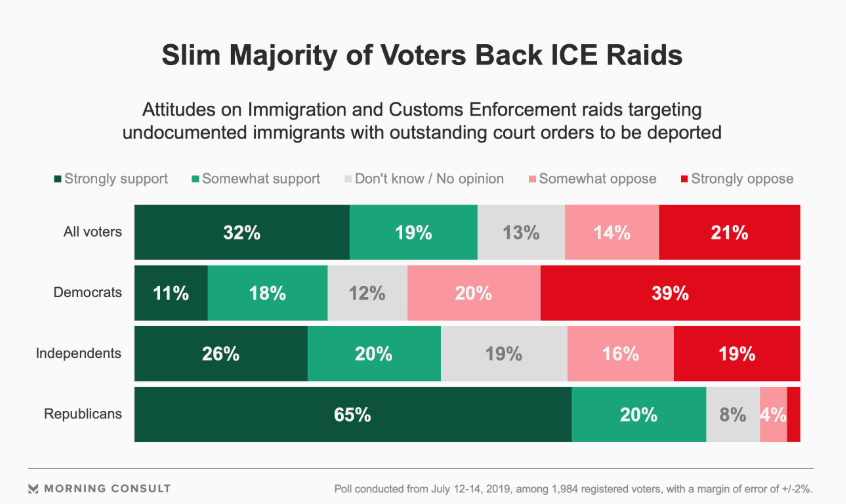 Roughly 1 million people in the United States have deportation orders from judges. However, under President Barack Obama, officials did little to enforce those orders and instead claimed they were focused only on deporting migrants who committed severe crimes.

Trump has directed his deputies to increase deportations, but the enforcement policy is strongly opposed by Democrats, business groups, immigration lawyers, and many allied judges.

Under Trump, many Democrats have shifted to support of “sanctuary cities,” where police officials are punished if they try to help federal officials deport criminals.

The no-enforcement policy is encouraging the migration of criminals into the United States. Breitbart News reported July 17:

For example, the indictment states that in one murder, six of the MS-13 Gang members charged kidnapped, choked, and attacked a rival gang member with a machete. The victim had his body parts dismembered and thrown into a canyon. One MS-13 Gang member used his machete to cut the victims’ heart out of his chest.

Breitbart News repeatedly reports on the growing cost of the Democrats’ pro-migrant policies:

In December 2017, a 28-year-old illegal alien from Mexico was arrested by the San Luis Obispo County Sheriff’s Office for violating his probation. ICE issued a detainer, but the request went ignored and he was released. A month later, the illegal alien was arrested and charged with rape and threating a crime with intent to terrorize. Again, ICE issued a detainer, but the county released the accused rapist.

Days after being released, ICE agents were able to locate the illegal alien and he was deported from the U.S. months later.