The Republican and Democrat-supported criminal justice reform legislation, known as the “First Step Act,” has already allowed hundreds of violent convicted criminals to be released from federal prison, records reveal.

The First Step Act, championed by a coalition of the leftist criminal justice reform movement, mogul Kim Kardashian West, and libertarian organizations funded by the billionaire Koch brothers, was signed into law last year by President Trump as advocates repeatedly claimed violent criminals would not be released early from prison.

Federal records exclusively obtained by Fox News‘ Tucker Carlson reveal that since the law’s enactment this year, the First Step Act has already freed hundreds of violent criminals from prison, including:

Also among the roughly 2,200 convicts already released from federal prison are 46 inmates who have been convicted for immigration-related offenses — this could be illegal aliens who repeatedly crossed the U.S.-Mexico border or human smugglers that have helped traffic foreign nationals into the country. 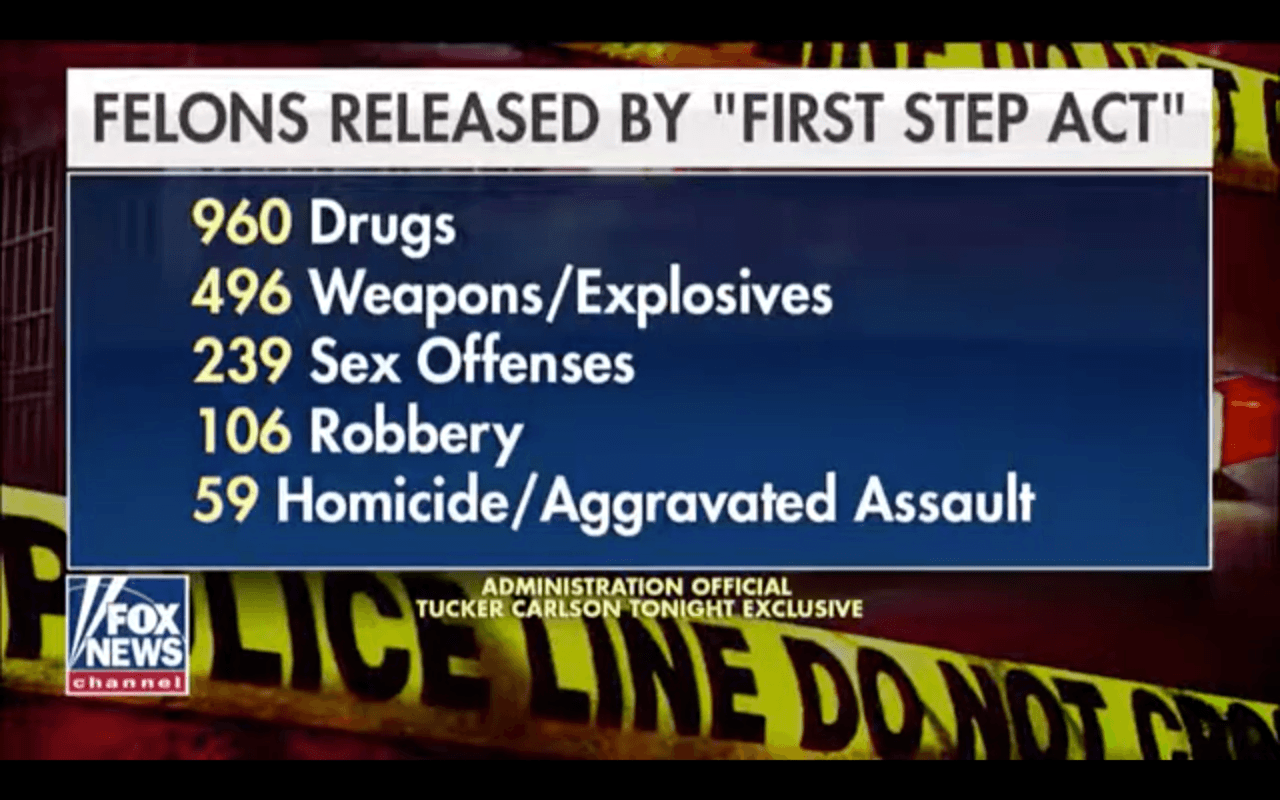 Sen. John Kennedy (R-LA), one of the few elected Republicans who voted against the First Step Act, told Carlson that he did not believe the talking point from criminal justice reform advocates that the law would only allow non-violent, low-level offenders to be released from federal prison.

“I didn’t believe it,” Kennedy said. “And I didn’t believe it because I read the bill … [lawmakers] turned over all of [Congress’] power to the administrative state, to the bureaucracy at the Bureau of Prisons and they can pretty much let loose whomever they want to.”

“Not only is this not about releasing non-violent felons, the majority — according to these numbers — are there for crimes of violence,” Carlson said. “So it was a complete lie what they told us.”

Despite efforts by Kennedy and Sen. Tom Cotton (R-AR) to add provisions to the First Step Act that ensures the victims of crimes are notified when a convict is released from federal prison, the majority of Senate Republicans and Democrats blocked those amendments.

“This bill was sold to America as only affecting low-level, non-violent criminals and that’s just not accurate,” Kennedy said.

Former United States Attorney for the District of Utah Brett Tolman, a proponent of the First Step Act, told Breitbart News in an interview on SiriusXM Patriot’s Breitbart News Tonight the number of violent criminals released thus far under the new law is a “misdirection of the facts” and that their release from prison was “all understood and expected.”

“All of those [violent criminals] … were scheduled to be released without the First Step Act,” Tolman said. “What the First Step Act [did] was fixed a calculation of good time that every inmate in the federal system earns … this was no surprise and this is conflating an issue that fixed the inappropriate application of the law.”

This month, the Department of Justice (DOJ) announced that, in total, about 3,100 convicts will be released this year from federal prison and nearly 1,700 drug sentences have already been reduced. The release of convicts through the First Step Act is costing American taxpayers about $75 million a year through 2023.