A team of 21 specialist U.S. firefighters arrived in Australia on Friday to help fight the massive bush fires now ravaging vast areas of the country.

The U.S. personnel have given up the chance to celebrate Christmas at home with their families to make the journey Down Under and join the fight in New South Wales (NSW), Australia’s most populous state, as it battles fires across several fronts.

Just… Watch this video. All 53 seconds of it.
Footage from within the NSW bushfires from firefighters. #Firestorm #NSWfires

Fire and Rescue NSW Commissioner Paul Baxter said the Australian accent will probably take some getting used to as will the dangers posed by the poisonous local wildlife, according to the Sydney Morning Herald.

That aside, the U.S. personnel “operate on very similar systems to what we operate on here in Australia, so they can drop onto our teams and, once they’ve picked up the change in accents, add value to our firefighting operations very quickly,” he said. 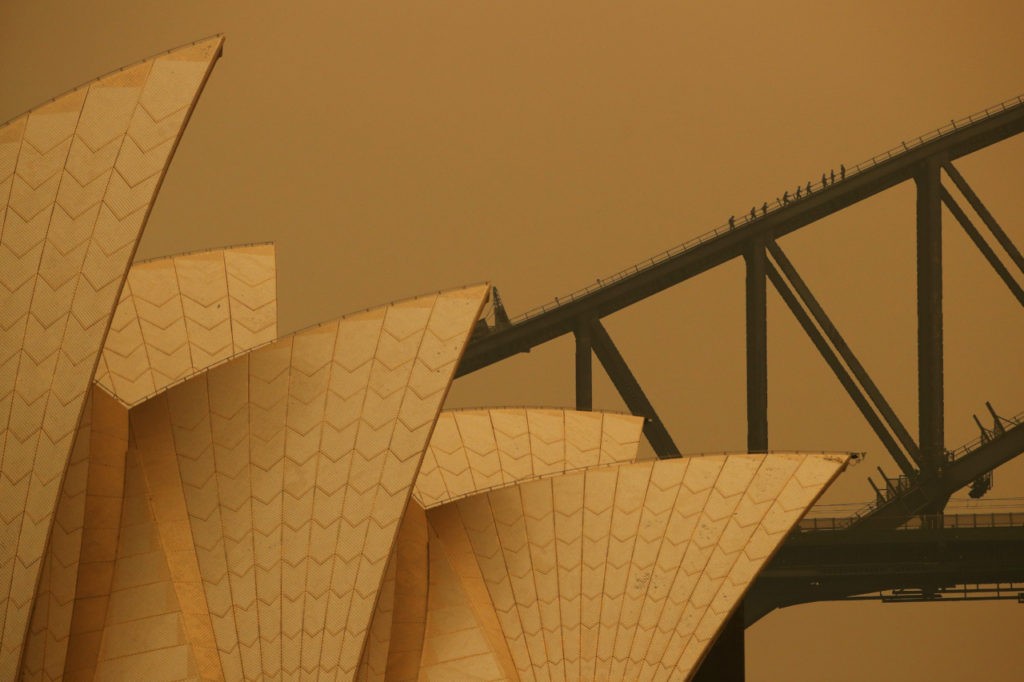 People climb the Sydney Harbour Bridge during a guided tour on December 6, 2019 in Sydney, Australia. Most of NSW remains under severe or very high fire danger warnings as more than 50 fires continue to burn across the state. Six people have died and 577 homes have been lost since the start of the bushfire season, with 420 homes destroyed in the past month alone. (Cameron Spencer/Getty Images)

Commissioner Baxter, who is also president and chair of the Australasian Fire and Emergency Service Authorities’ Council, which coordinates international deployments, said it is the first time North American personnel have been sent to the state of NSW to help with the firefighting effort.

“We haven’t had the need because of our firefighting resources here in Australia and New Zealand,” Commissioner Baxter said. But the call was made due to this year’s “unprecedented” bushfire season that began in winter, and, by the first week of summer, had already wreaked havoc throughout the state.

Commissioner Baxter said the Americans are specialists in incident management and aviation who will help support management teams under extreme pressure in making “very big calls that could absolutely result in lives being saved or lost,” the Herald reports.

“We’re talking about a marathon, not a sprint, so having the additional resources to go into these very specialist roles where we have less people is just so important,” Commissioner Baxter said.

Almost 600 homes have been destroyed and six people have died since the bush fire crisis began in September.

That is many fewer than Australia’s deadliest recent fire season in 2009 when almost 200 people died, but 2019’s toll so far belies the scale of devastation. 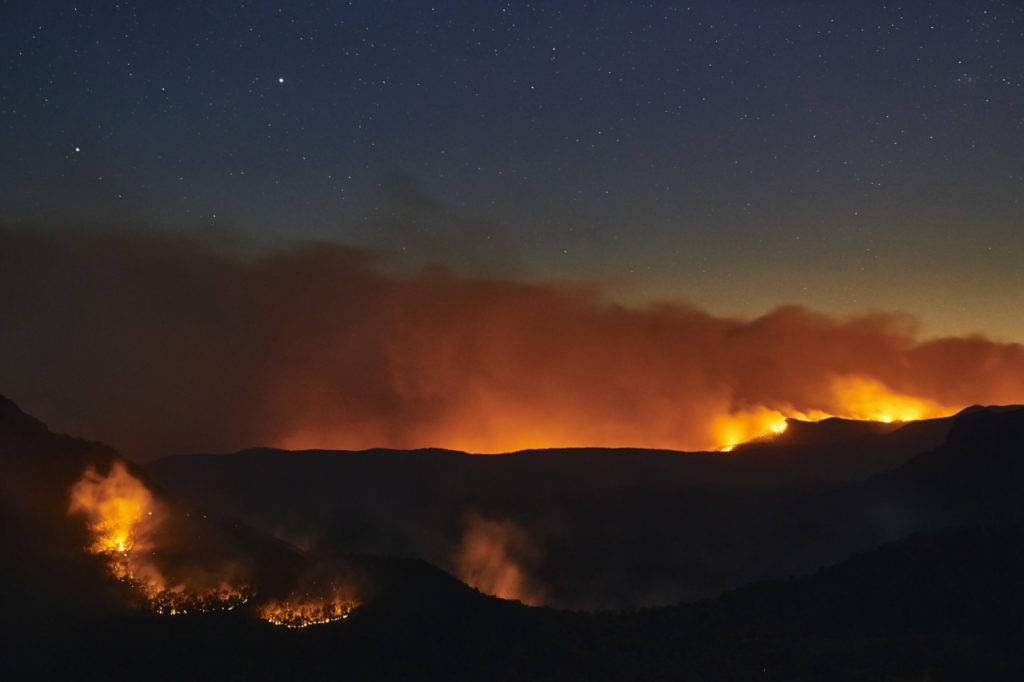 Flames from scattered bushfires are pictured on the horizon on December 04, 2019 in Katoomba, Australia. It is estimated that 20 per cent of the Blue Mountains World Heritage Area has been impacted as bushfires continue across New South Wales. (Brett Hemmings/Getty Images)

Almost five million million acres have burned — the size of some small countries — across a region spanning hundreds of miles, as Breitbart News reported.

More than 100 fires were burning across Australia’s east late Saturday, including a “mega fire” burning north of Sydney, the country’s biggest city.

Prime Minister Scott Morrison has refused to link the fires to climate change as his critics claim, stating they have always been a part of the Australian landscape.

Deputy Prime Minister Michael McCormack went further and said any attempt to link the two is a “disgrace.”

“They don’t need the ravings of some pure, enlightened and woke capital city greenies at this time,” he said, backing the efforts of firefighters who risk their lives to spare others.