President Donald Trump’s new immigration judges are far more likely to reject migrants’ requests for asylum than are the judges prior presidents picked.

Four Trump immigration judges in Memphis, Tennessee, denied more than 90 percent of claims from migrants, while the prior judges granted roughly half of the requests, according to a study by immigration lawyer Lily Axelrod.

There are 465 immigration judges, some of whom stay on the bench for decades. But Trump’s pro-American policies are frustrating judges who were appointed by former President Barack Obama, prompting some to leave and open new slots for Trump-appointed judges. In 2019, 45 judges quit, compared to 24 judges who retired in 2018.

“For 24 years, [Judge Lisa Dornell] sat on the bench in Baltimore’s immigration court, hearing hundreds of cases of immigrants trying to stay in the United States,” CNN reported on December 27. “It was a privilege to be able to preside over so many different cases and be able to grant relief to people who needed relief,” Dornell told CNN in an interview about the rising number of retiring judges. The article added:

[Ilyce] Shugall recalled the challenges she had faced in trying to move forward with cases in a way she thought was appropriate. “I felt like as more and more policies were coming down, it was making it harder and harder to effectively hear cases in the way that I felt was appropriate and in compliance with the statute regulations and Constitution,” Shugall said.

According to TRAC Reports Inc, “Judge Dornell is recorded as deciding 921 asylum claims on their merits. Of these, she granted 456 … and denied 464.”

The new judges are picked by Trump’s attorney general and cannot be blocked by hostile Democrats. So their gradual arrival is likely to have a dramatic effect as the number of pro-migrant judges decline.

The judges have very different track records, in part because immigration law is complex, the migrants’ pleas are often heartrending, and the judges have their human preferences. For example, Florida-based Judge Denise Slavin was appointed by President Bill Clinton, and she approved 284 pleas and denied only 26, according to a 2011 analysis by TRAC Reports Inc. In contrast, Judge Kevin Chapman was appointed by President George W. Bush and granted only 32 pleas while denying 192, according to TRAC.

The changes have even impacted the most pro-migration areas, such as New York. Gothamist.com reported December 27:

But the shift here is dramatic. Just four years ago, the research group TRAC found New York judges denied just 16 percent of asylum seekers. That figure has been rising since Trump took office. But the average denial rate for a New York judge shot up to 46 percent in fiscal year 2019, according to the latest data, from 32 percent in the previous year.

But the gradual replacement of migrant-friendly judges by pro-American judges is likely to skyrocket rejection rates for migrants, according to a TRAC forecast of court decisions. In fiscal 2020, which started October 1, 2019, the judges are likely to order the deportation of 290,000 migrants, TRAC predicts: 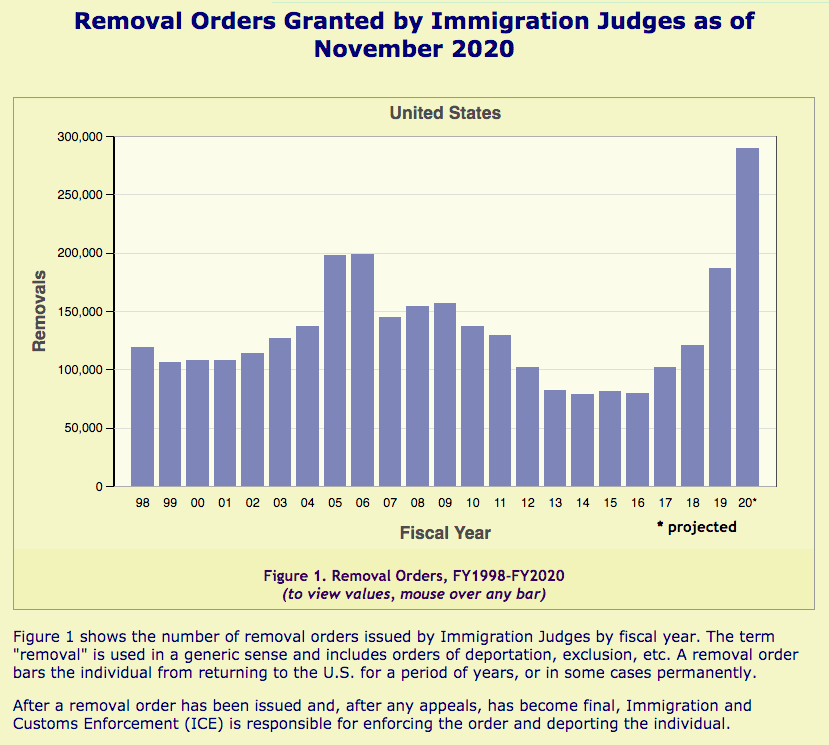 The number is far higher than the 80,000 deportation orders in 2016 — but it is also a very small share of the 12-plus million illegals living in the United States. Moreover, ICE will have to track down and deport most of the migrants amid massive resistance by pro-migration advocacy and business groups.

Even as the rejection rate rises, more migrants are getting relief because the courts are processing far more cases. This means that roughly 38,000 migrants are likely to win their cases in 2020 amid the predicted flood of 290,000 expected rejections, the one million backlog of cases, and the illegal population of approximately 12 million illegals. 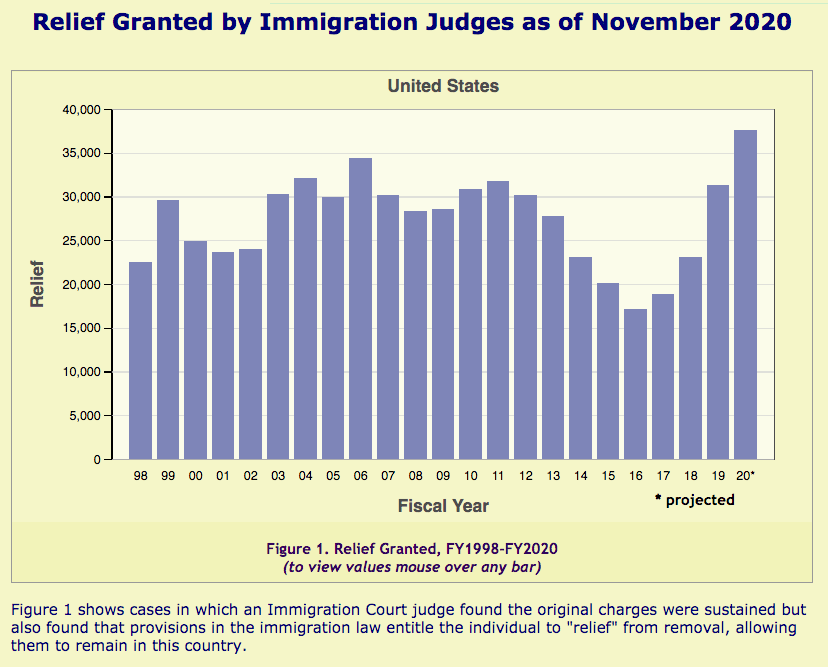 Trump’s reinvigoration of the immigration judiciary has prompted sharp criticism from Democrats and their allies among immigration lawyers. For example, Democrats have drafted a bill that would allow the Senate to block Trump’s nominations.

“Being an IJ has always been a high-pressure job,” said Dan Cadman, a former immigration official who now works with the Center for  Immigration Studies. He continued:

Deciding the lives of individuals in the context of removal and asylum cases on a day-in, day-out basis can wear on the soul over the long term. That’s why there has always been notable turnover in the ranks of the IJ corps, but this has become even more true with the staggering caseloads that have developed (well over a million cases are backlogged in the immigration courts right now).
…

One has to be deeply amused at the implication that there is something untoward about unofficial litmus tests being applied to IJ applicants. Of course there are, and have always been. Does anyone really think that the Obama administration — whose chief immigration architect was Cecilia Muñoz, domestic policy advisor to the president and former senior official of La Raza, an open-borders advocacy group (see here and here ) — did not put its thumb on the scales where selection of IJs (and, for that matter, asylum corps officers) was concerned? If you believe such a thing, then you, sir or madam, are a hopeless naïf.

Nor, in fairness, was the Obama White House the first to go down that path. It was an unspoken given during the Clinton and Bush administrations as well. One of the prerogatives of winning an election is the right to select personnel, both political appointees and permanent civil servants, whose views are consistent with your own. The most clever administrations, and I certainly count the Obama White House among them, actually focus on leaving behind a cadre of permanent staff because they know that political appointees come and go, but changing the bureaucracy in a way that outlasts your term of office means carefully choosing the bureaucrats, IJs among them, to ensure a philosophical affinity toward your own views.

“We all work with a realization,” former Judge Dornell told CNN, “that it’s the prerogative of the administration to implement policies as they see fit.”