Karl Marx famously wrote in The 18th Brumaire of Louis Bonaparte: “Hegel remarks somewhere that all facts and personages of great importance in world history occur, as it were, twice. He forgot to add: the first time as tragedy, the second as farce.”

In that fashion, Nancy Pelosi and the Democrats tried this week to re-enact the assassination of Julius Caesar, so memorably portrayed by William Shakespeare nearly 1,650 years later in his tragedy of the same name.

Stoop, Romans, stoop,
And let us bathe our hands in Caesar’s blood
Up to the elbows, and besmear our swords:
Then walk we forth, even to the market-place,
And, waving our red weapons o’er our heads,
Let’s all cry ‘Peace, freedom and liberty!’

So says the noble Brutus, roped into the plot in the belief he is defending the Roman republic. The menacing Cassius adds:

Stoop, then, and wash. How many ages hence
Shall this our lofty scene be acted over
In states unborn and accents yet unknown!

Acted over, indeed — or over-acted, as Pelosi and her lieutenants tried, one more time, to pretend that impeachment was a sad and solemn occasion. The ceremony was “so sad, so tragic for our country,” she said, before signing the articles of impeachment, smiling as she plucked gold-tipped commemorative pens from silver trays, handing them to her lackeys.

They raised the pens, as Brutus and Cassius raised their bloody swords, proclaiming that they had defended democracy. 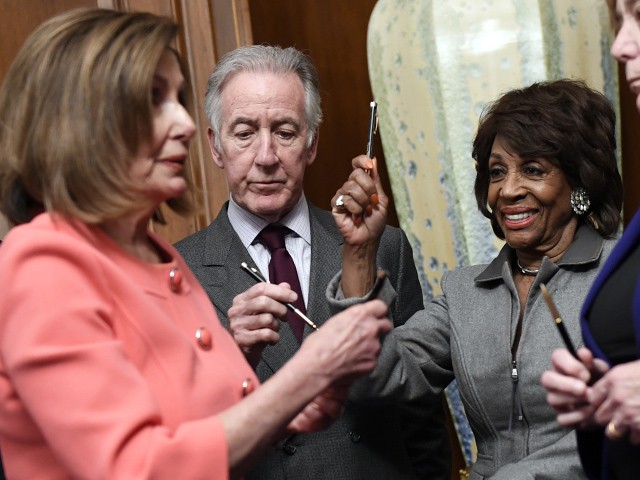 One of those receiving a pen was Rep. Maxine Waters (D-CA), one of the first members of Congress to call for President Donald Trump to be impeached — long before he had done anything at all. “Impeach 45!” she chanted with mobs of enraged leftists, refusing even to use the president’s name. She also encouraged Democrats to harass his staff at every opportunity — “they won’t be able to go to a restaurant, they won’t be able to stop at a gas station” — until he was forced out of office.

Pelosi’s celebration with Waters and the rest shattered what little remained of the illusion that Democrats felt any sense of regret or shame at what they are doing to the country. They are attempting a coup — with pens, for now, instead of daggers. And they celebrated openly, convinced that their Greek chorus in the mainstream media would never dare to call out their lies. (MSNBC called the ceremony “sacramental”; the worst CNN could muster was that the pens were “off message.”)

Now the action moves to the Senate, where Republicans are expected to acquit the president — but where some, like Mitt Romney, have been auditioning for the role of Cassius since the 2016 election.

A few seem tempted to support the bogus attempt by the House to impose witnesses on the upper chamber that Democrats could not be bothered to wait for, or call. Perhaps, like Brutus, they naïvely believe they would be acting in the interests of “rule of law,” while they help its enemies.

This play will likely end as Caesar does: the conspirators will, instead of rallying the people to their cause, alienate them. They will sow the seeds of their own defeat as their opposition, stung by the initial assault, regroups and counter-attacks. Already, Democrats in Iowa spoke this week about how none of their candidates seemed capable of beating the president, much less running the country.

And unlike the Roman Senate, the U.S. Senate has the power to stop the conspiracy.

Moreover, unlike history — and Shakespeare’s drama — this version of the play is a farce, not a tragedy. The Democrats, thanks to the ineptitude of CNN — which tried rigging another primary against Sen. Bernie Sanders (I-VT) this week — remain mired in a pointless he-said-she-said about women in politics as they offer an all-white slate of frontrunners.

Karl Marx was wrong about many things, but as to the antics of his 21st century ideological descendants, he was prophetic.