Congress should fight the Chinese coronavirus epidemic by importing an unlimited inflow of Chinese and other foreign scientists, doctors, nurses, and blue-collar healthcare workers into the United States, says an op-ed by an advocate at the Cato Institute.

“These immigrants are the first responders to this crisis. America must treat them as heroes, not as threats,” says the op-ed by David Bier, an advocate at Cato, which is a libertarian advocacy center founded by an open borders champion, Charles Koch. He sidelined Americans’ role in science, saying:

As Congress prepares a legislative response to the [coronavirus] crisis, it should consider completely exempting all pharmaceutical researchers and scientists as well as doctors and physicians from the H-1B and green card limits and expediting their processing.

The open door for foreign migrants would deter young Americans from entering the healthcare and science sectors — especially because the inevitable salary declines would make it difficult for them to repay large tuition debts to universities.

The open-door policy has already been implemented in the nation’s software and computer industries. In Silicon Valley, for example, the growing population of foreign contract workers has been accompanied by a massive reduction in Americans’ share of the tech work, an innovation slowdown, and the likely loss of leadership to Chinese firms, such as Huawei.

But the decline in innovation is masked by the companies’ high stock market values. Those values have remained high partly because the foreign labor inflow has reduced salaries for the Americans who remain in the sector.

Even before the coronavirus epidemic, at least one other Koch-based group called for an unlimited inflow of foreign healthcare professionals via the H-1B visa worker program. The cap sets an annual limit on the number of H-1B workers who can be imported by for-profit companies.

“The cap should be repealed altogether for the healthcare sector,” Daniel Griswold, the director of trade and immigration issues at the Koch-funded Mercatus Center in Arlington, VA, told the House committee on small business in June 2019.

Also, Cato’s open doors op-ed does not admit that non-profit centers are already allowed to hire an unlimited inflow of foreign scientists via the “cap-exempt” side of the H-1B program. For example, in 2019, federal agencies certified 7,193 requests for foreign healthcare workers by cap-exempt centers, according to federal data collected by MyVisaJobs.com. During the same period, for-profit companies sought to keep or import roughly another 6,000 foreign healthcare graduates.”

Congress provides virtually no protection to American graduates when companies want to hire foreign graduates. For example, the Department of Labor must approve any corporate request — which is dubbed a “Labor Condition Application” — if the request is fully completed, even if many Americans are ready and eager to take the job.

Also, federal agencies enforce anti-discrimination laws against the many companies that prefer to discriminate against American professionals by hiring foreign workers.

DoJ/EEOC do nothing as US & Indian execs trade US jobs to Indian #H1B workers, cutting Americans out of careers, homes & families.
This trade choked innovation in Silicon-V, slammed insurance & banking. #SenMikeLee & #S386 will expand it to healthcare https://t.co/qoENwyO6X7

The Cato op-ed in USA Today described the variety of foreign graduates sought by healthcare companies:

A new analysis of government data from the Cato Institute shows that eight of the major companies developing treatments and vaccines for the virus are heavily reliant on foreign workers. From 2010 to 2019, we found that the Department of Labor approved the companies developing treatments or vaccines for coronavirus to hire more than 11,000 immigrants and H-1B high skilled foreign workers.

Among these hires were 3,310 foreign biochemists, biophysicists, chemists, and other scientists on H-1B visas. They had brought in thousands of statisticians to analyze data and software, database, and computer engineers to support them. Without these workers, America’s hope of treating and saving thousands of lives at risk from the coronavirus would greatly diminish.

The supply of nurses and blue-collar home health aides should also be boosted by an open door policy, he said:

We also need doctors, nurses, and home health aides—all occupations where immigrants are disproportionately represented. In New York City where the coronavirus outbreak is shutting down schools, 45 percent of doctors and 58 percent of registered nurses were foreign-born in 2016. Among home health care aids who are particularly important for the elderly population most at risk from the virus, the share was 76%.

A Cato study of guest worker data shows that U.S. biomedical companies have dramatically increased their hiring of foreign scientists and statisticians in 2017, even though many Americans — especially women — continued to study for careers in biomedicine:

The major U.S. companies seeking a coronavirus vaccine or treatment have together received approvals from the Department of Labor to hire foreign workers with either green cards or H‑1B work visas more than 11,000 times from 2010 to 2019.[i] The eight companies to have used the legal immigration system (at least directly) to request foreign workers include Gilead Sciences, Moderna Therapeutics, GlaxoSmithKline, Inovio, Johnson and Johnson Pharmaceuticals, Regeneron, Vir Therapeutics, and Sanofi. Figure 1 shows the number of workers over the last decade. 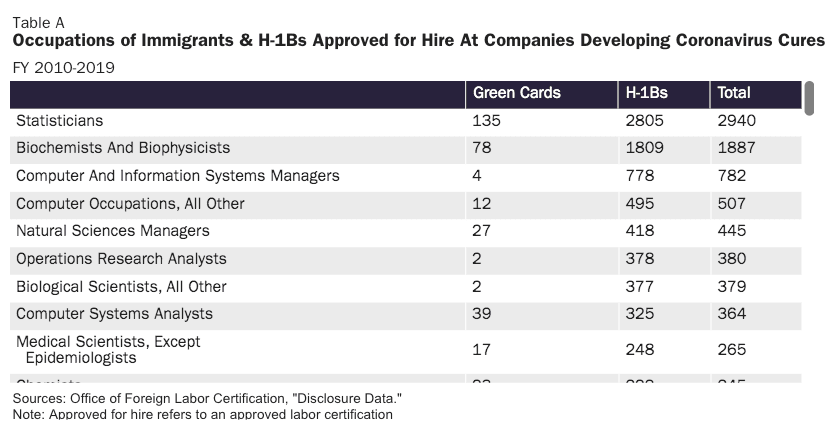 U.S. free-trade policy — which is cheered by Cato — has also moved much of the United States’ pharmaceutical industry to China.

Also, the government-run side of American science is already reliant on young Chinese and Indian scientists, amid growing concern about the Chinese government’s infiltration of the U.S. science sector.

But U.S. science managers must quit their reliance on foreign graduates, the head of the National Academies of Sciences said at an event to celebrate 70 years of discoveries by the National Science Foundation (NSF).

“We have prospered because of it. But guess what? That’s not gonna happen anymore,” warned Marcia McNutt, a geophysicist who is the president of the National Academy of Sciences said February 6:

But that foreign reliance is spotlighted by President Donald Trump’s December agreement to nominate India-born U.S. citizen Sethuraman Panchanathan to serve as director of the National Science Foundation.