New York Gov. Andrew Cuomo acknowledged Friday during his press conference there were questions about who was to blame for the coronavirus pandemic that caught his state off-guard but did not share one obvious answer.

“Who should have warned us last December/January?” Cuomo asked, displacing a graphic with the question displayed. 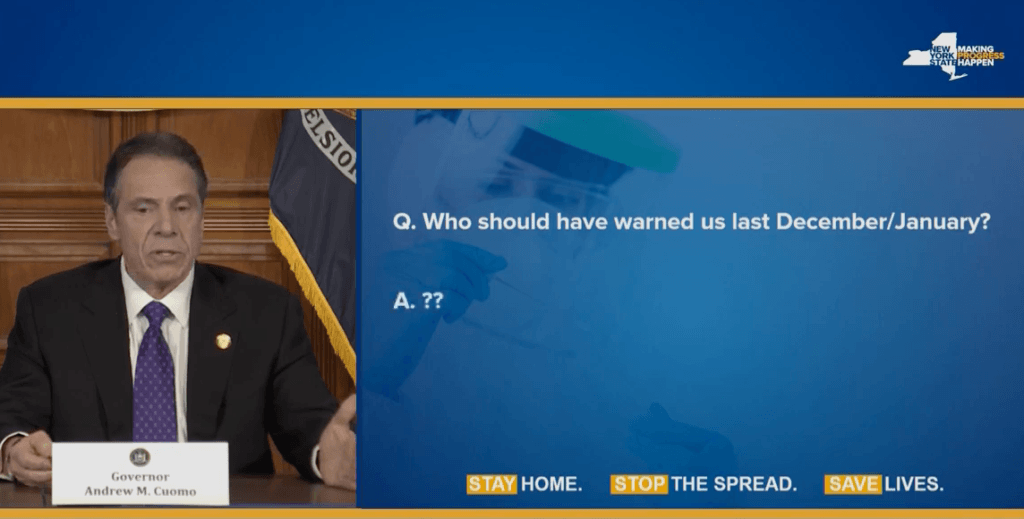 “Where were the horns that should have been triggered back in December and January, where were the warning signs, who was supposed to blow the whistle?” Cuomo asked.

The governor noted that President Trump blamed the World Health Organization but that he did not know whether Trump was correct.

“Sometimes the question is more important than the answer,” he said.

Cuomo said that the answer to the question was critical while making the decision about whether or not to reopen the state for business. The governor then displayed several media articles warning of a more serious impact on the country from the coronavirus.

“The warning signs were there,” he said, adding, “We saw what was happening in Asia, we saw what starting to happen to Europe.”

He noted that experts were still saying in January and February that there was nothing to worry about the virus upending their lives.

“Where were the international experts?” he asked.

Cuomo put up a graphic showing the total confirmed cases of the virus and noted that China only had 84,138 cases.

“How does that happen?” he asked, comparing the numbers from China to the United States.

At no point did Cuomo challenge China’s response to the virus or their reported numbers.

The governor defended his own response to the crisis, noting that he listened to the experts throughout the crisis.