The filthy, homeless-ridden New York City subway system is stumbling into the spotlight as the Chinese coronavirus crisis keeps New Yorkers mostly inside their homes and businesses closed.

On Thursday, Gov. Andrew Cuomo (D) announced that the city’s Metropolitan Transportation Authority (MTA) would get a deep cleaning every night about two months after the first case of coronavirus was confirmed in the state.

Cuomo provided no specific explanation as to why the action was taken so late into the city’s battle with the coronavirus.

Riders have foisted unprecedented changes onto the MTA in the last two months — including drastic declines in ridership as New Yorkers have been ordered to stay home since March 6 by Mayor Bill de Blasio (D) and increasing use of the subway among the city’s roughly 70,000 homeless residents.

Weeks ago, Massachusetts Institute of Technology (MIT) economist Jeffrey Harris, who is also a physician, released a study detailing how the MTA helped vastly spread the coronavirus in the early weeks of March.

Harris’s study notes that “subway lines with the largest drop in ridership during the second and third weeks of March had the lowest subsequent rates of infection in the zip codes traversed by their routes” and “maps of subway station turnstile entries, superimposed upon zip code-level maps of reported coronavirus incidence, are strongly consistent with subway-facilitated disease propagation.”

Yet at that time, in early March, New York officials did not make changes to MTA operations, and up to five million residents a day were continuing to use the subway. MTA officials said they had ramped up cleaning of the subway with deep cleanings every 72 hours and additional use of sanitizers.

The week that New York officials reaffirmed that the MTA would not close, subway ridership dropped by nearly 50 percent at the busiest stations in Midtown Manhattan.

Changes to MTA operations only came about a week later, when staff shortages forced MTA officials to stop services for its B, W, and Z lines. The remaining 24 subway lines remained operating with some delays and moderate changes. 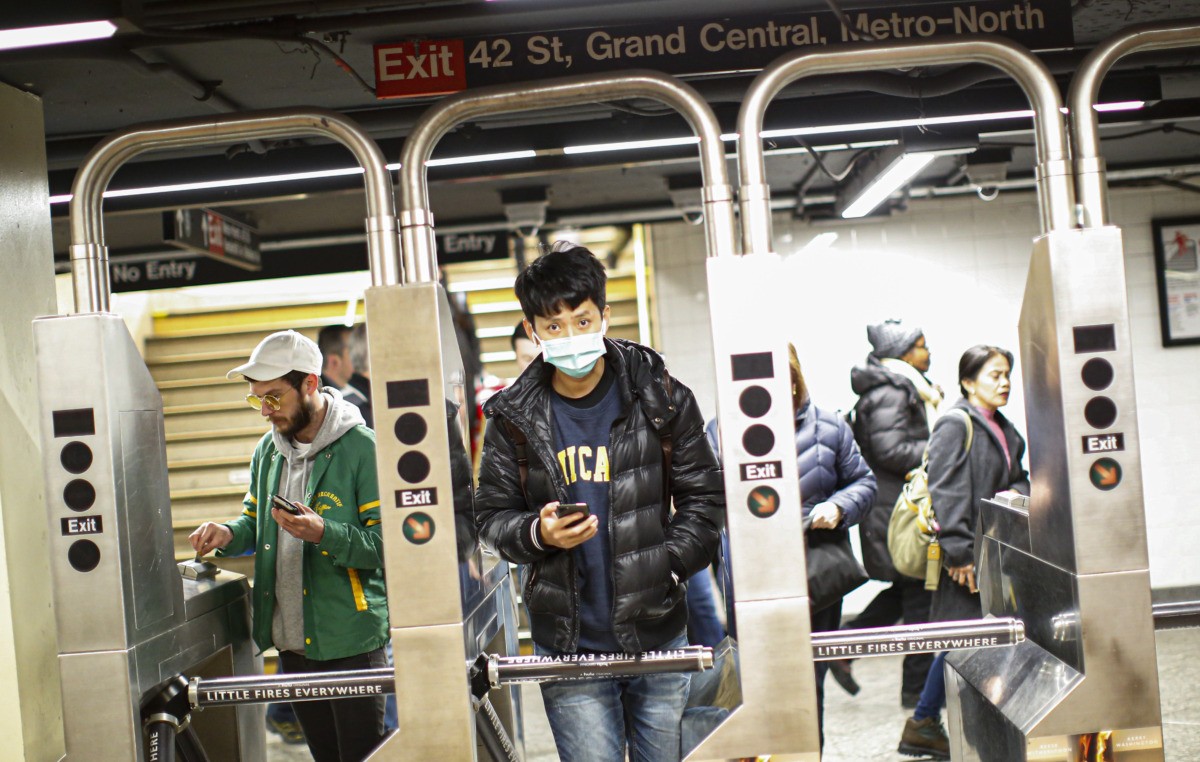 A man wears a mask as he arrives to take the subway on March 8, 2020, in New York City. (KENA BETANCUR/AFP via Getty Images) 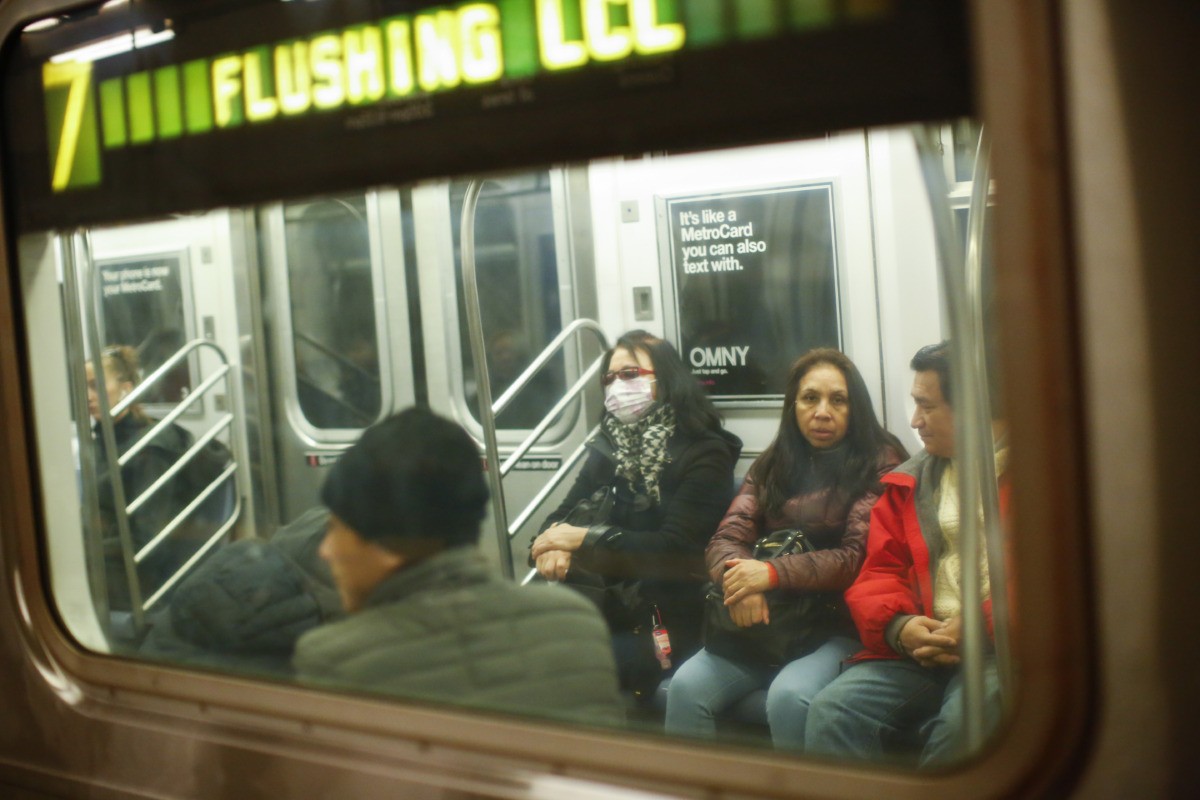 A woman wears a mask as she rides the subway on March 8, 2020, in New York City. (KENA BETANCUR/AFP via Getty Images) 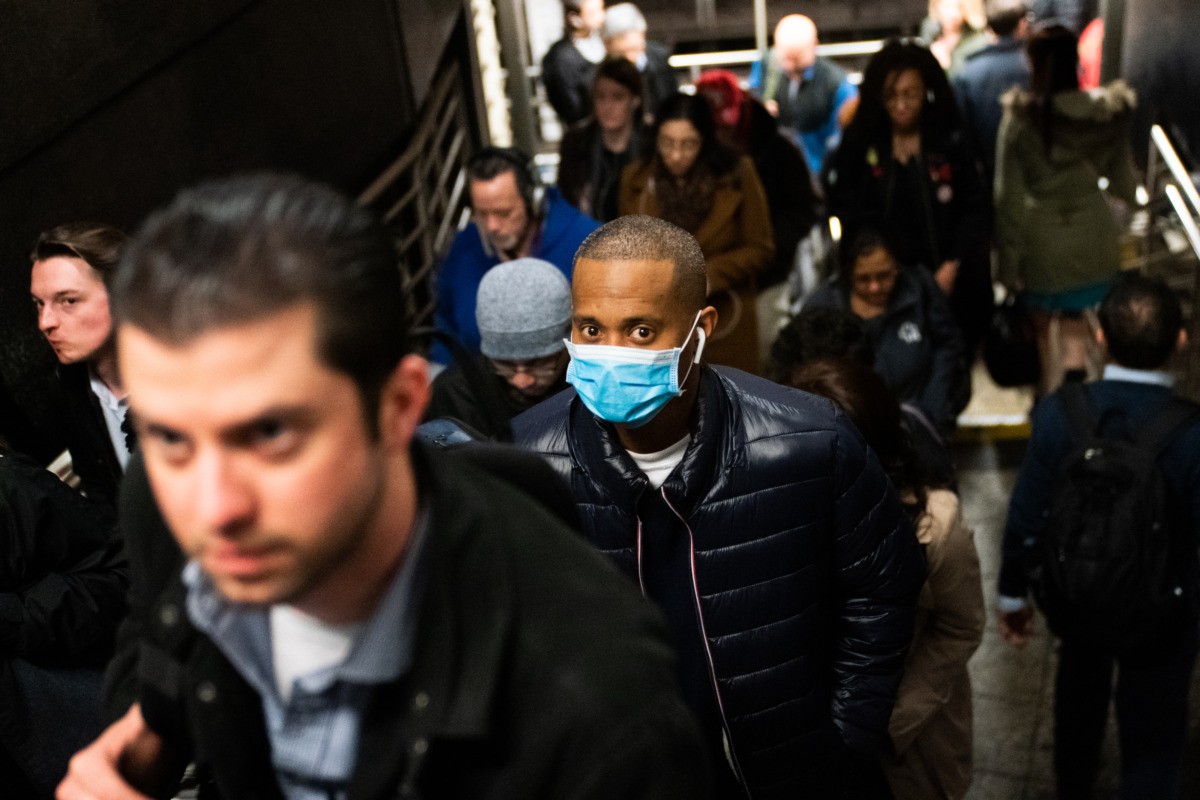 A man wearing a mask is seen on a subway platform on March 9, 2020, in New York City. (Jeenah Moon/Getty Images)

A month later, about midway through April, New York City has become the epicenter of the coronavirus in the United States.

Close to 80 MTA workers have died of the coronavirus as of April 20, and a conservative Democrat on the New York City Council, Councilman Robert Holden, has asked that MTA services be halted. Three other councilmembers signed on to the letter.

Holden, who votes primarily with the council’s handful of Republicans, wrote in the letter:

Taking this all into account, we believe that the New York City transit system is a primary contributor to the spread of COVID-19. During that time, the city and state should partner with for-hire vehicle services to provide rides to essential workers. All tolls and parking for restrictions, except for no standing, should also be lifted during the shutdown to allow essential workers to drive and park their personal vehicles to work. [Emphasis added]

The letter was almost immediately disregarded by de Blasio’s office, Cuomo, MTA officials, and the MTA union. In the meantime, subway ridership has continued to drop by about 90 percent across New York City.

While the city’s usual subway riders stay home, the city’s widespread homeless population has begun to use MTA trains as shelters. In footage obtained by the New York Post this week, an MTA worker revealed the homeless taking shelter in the subway.

As of April 15, at least 27 homeless residents had died of coronavirus out of 460 confirmed cases among the population.

In an April 23 report by New York City’s CBS affiliate, MTA conductors and workers rang the alarm on the filthiness of the subway about a month after officials had claimed they were greatly increasing cleanings:

The MTA says since early March, the entire fleet of subway cars and buses gets disinfected every 72 hours, but its conductors tell us they’re not seeing that.

“The trash, the feces, the urine, is there. It’s just a very toxic, unsafe environment,” Thompson said. [Emphasis added]

Late last month, Cuomo justified his keeping the subway running as usual while slamming homeless residents using it to live and sleep in. This is when Cuomo eventually ordered that the subway be deep cleaned nightly, rather than every 72 hours, ensuring that it is no longer running 24 hours a day.

Cuomo said during the news conference:

They deserve better; they will have better. 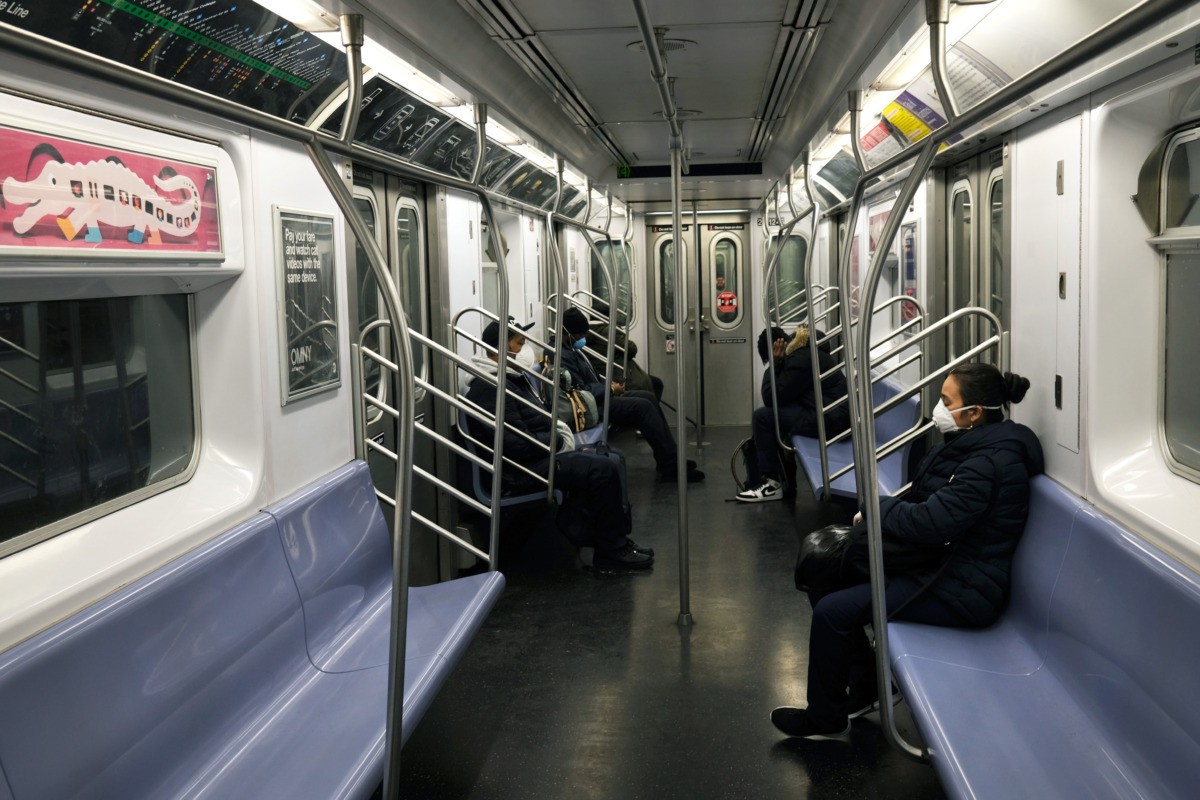 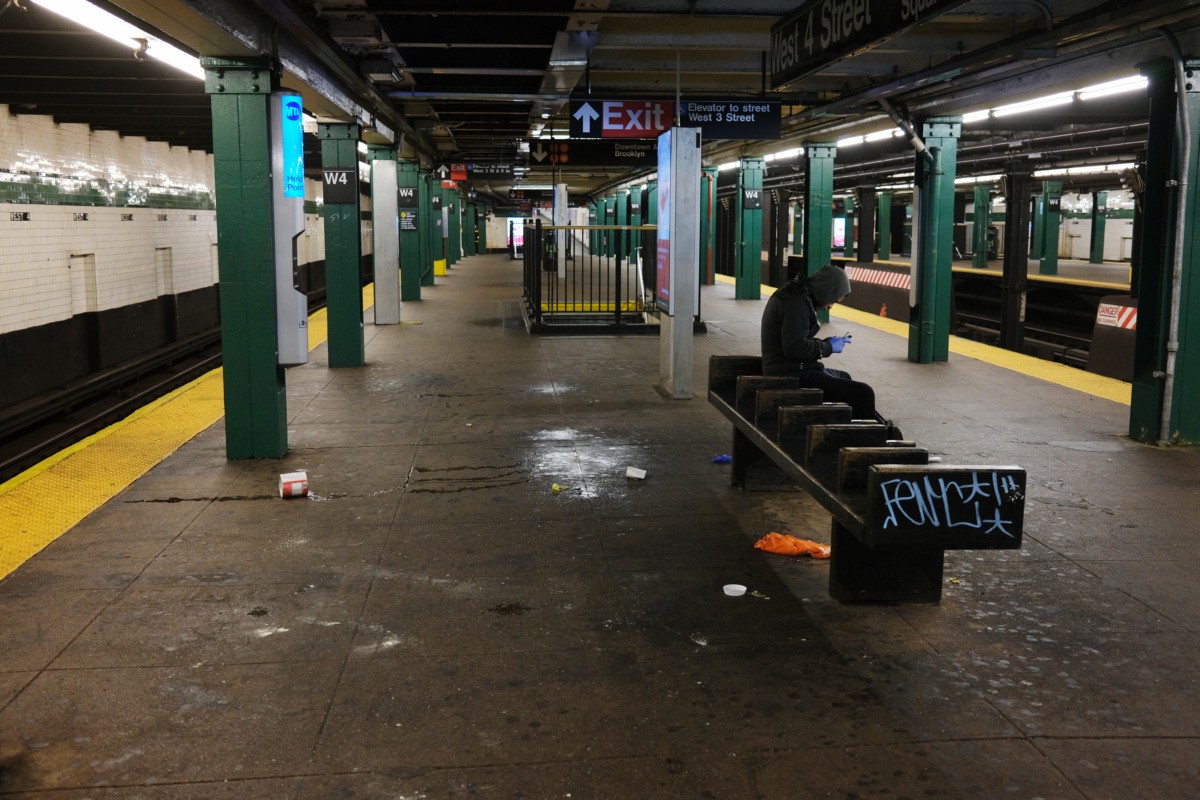 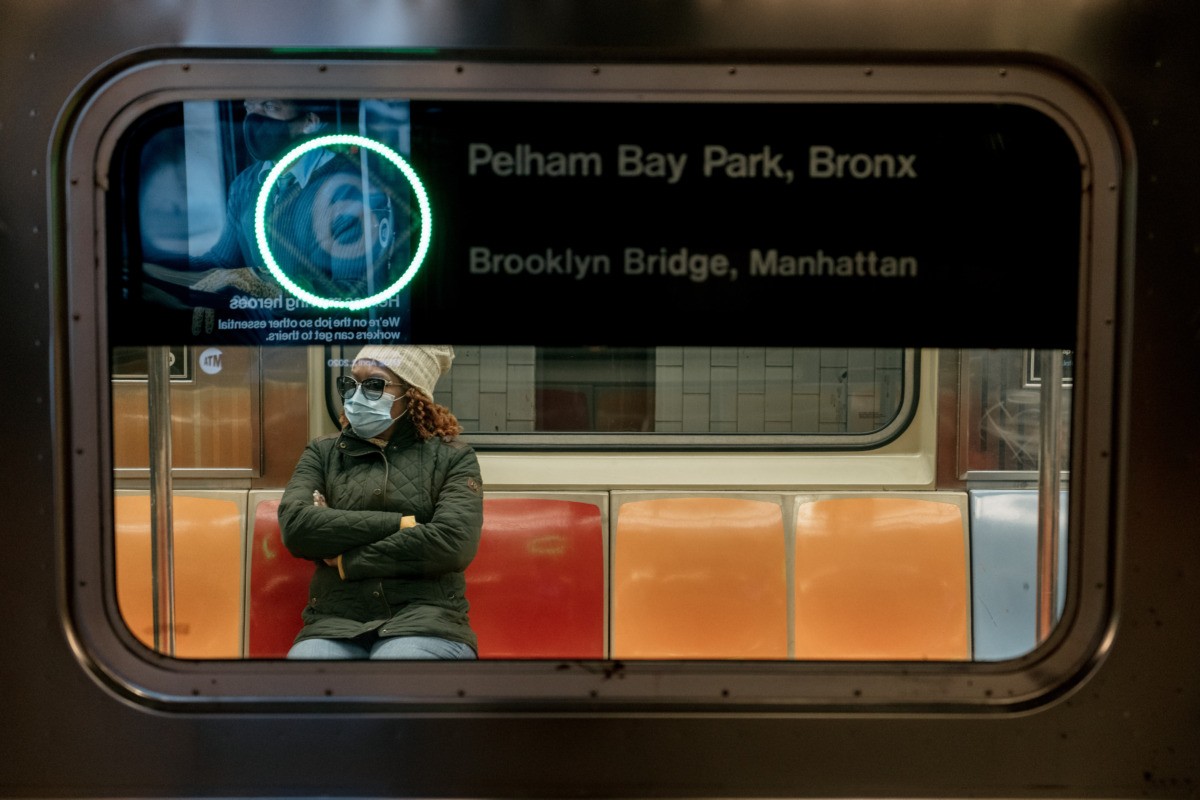 A commuter wears a mask while riding a subway train on April 17, 2020, in New York City. (Scott Heins/Getty Images)

New York City’s yellow cabs are still operating but with significant cuts in ridership that have further doomed drivers. In an interview with CityLimits.org, one taxi driver said they are “living through a period worse than 9/11” and that “two or three hours can pass before anyone gets into the cab.”

For now, the MTA is supposed to only be for essential workers getting to their jobs. Officials have rolled out a full-fledged “Keep Them Covered” campaign to demand riders wear masks on the subway.

The campaign will appear on more than 4,000 screens in the subway, 2,600 screens on city buses, and 550 screens on outer-city railroads. Audio telling riders that they must wear masks when taking the subway will also play routinely throughout MTA stations.

Over the last two decades, New York City mayors have made driving cars — an alternative to subway riding — in the city increasingly difficult. In the latter half of his tenure as mayor, billionaire Michael Bloomberg pushed heavily for a car-free city in the hopes of a driverless future that has yet to come to fruition.

Among Bloomberg’s plans was an effort to charge residents driving into Manhattan in a congestion-pricing scheme and temporary car-free zones that pedestrians and cyclists could freely use throughout the day.

De Blasio has made similar moves. In the last few years, de Blasio has dedicated huge sums of taxpayer money toward creating bike lanes across the city — lanes that take up additional space on already traffic-crowded roads.

Last year, with de Blasio’s endorsement, Cuomo successfully lobbied for congestion pricing in New York City, which could go into effect in 2021. The plan to charge drivers, and install more bike lanes, in certain parts of Manhattan will be the first of its kind in the country and is designed to keep cars off the road.

Of course, the anti-driving measures will mean increased subway ridership. Researchers from Fordham Law School claim the plan will usher in only a moderate increase in subway riders, an additional 41,000 a day.

De Blasio and Cuomo, though, have yet to say whether such plans will be delayed due to the coronavirus crisis.