Lady Gaga is holding President Donald Trump responsible for the race riots that have engulfed the country, calling the president a “racist”  who “offers nothing but ignorance and prejudice while black lives continue to be taken.”

The Oscar-winning pop star and actress posted a lengthy statement on Twitter late Saturday in which she expressed her outrage over the in-custody death of George Floyd in Minneapolis. She also acknowledged her position as a “white, privileged woman” and the need for the “privileged community” to do more for the black community.

In the wake of George Floyd’s death while in police custody, riots have raged across the country. A federal service office was shot dead in Oakland on Friday and another man was shot dead in Detroit.

But Lady Gaga saved her harshest word for President Trump, calling him a “fool” and a “racist.”

“We have known for a long time that President Trump has failed,” she wrote. “He holds the most powerful office in the world, yet offers nothing but ignorance and prejudice while black lives continue to be taken. We have known he is a fool, and a racist, since he took office.”

She added: “He is fueling a system that is already rooted in racism, and racist activity, and we can all see what is happening. It’s time for a change.” 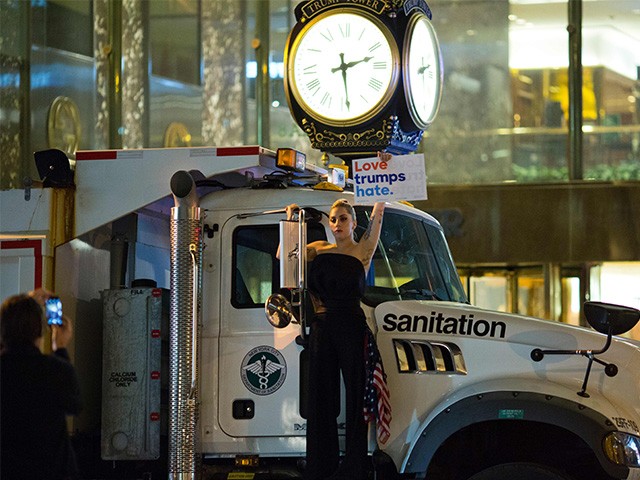 Musician Lady Gaga stages a protest against Republican presidential nominee Donald Trump on a sanitation truck outside Trump Tower in New York City after midnight on election day November 9, 2016. Donald Trump stunned America and the world, riding a wave of populist resentment to defeat Hillary Clinton in the race to become the 45th president of the United States. (DOMINICK REUTER/AFP/Getty Images)

Lady Gaga said she doesn’t want to incite further anger but “that is precisely the emotion that is justified.”

“We MUST show our love for the black community. As a white, privileged woman, I take an oath to stand by that,” she said. “We haven’t, as a privileged community, done enough to fight racism and stand up for those people who are being killed by it.”

“I will use the words that I can find to try to communicate what needs to change in as an effective and non-violent way as possible for me.”

President Trump said on Wednesday “At my request, the FBI and the Department of Justice are already well into an investigation as to the very sad and tragic death in Minnesota of George Floyd.”

“I have asked for this investigation to be expedited and greatly appreciate all of the work done by local law enforcement,” President Trump said before offering his condolences to Floyd’s family. “My heart goes out to George’s family and friends. Justice will be served!”