Riots took place in Democrat-run cities across the United States on Saturday as Black Lives Matter and Antifa activists took to the streets in solidarity with demonstrators in Portland who have confronted federal law enforcement nightly.

Twitter chatter labeled the damage as an effort to stand in “solidarity” with the “Freedom Fighters” of Portland, where protestors have repeatedly clashed w/agents guarding a federal courthouse. pic.twitter.com/7VNhhsli5Q

Vandals attacked a federal building housing the local office of Immigration and Customs Enforcement (ICE) in the early hours of Sunday morning. The vandalism was allegedly connected to expressions of solidarity with the Portland riots.

Clip of the shooting at the protest in Austin Texas from Hiram Gilberto on FB pic.twitter.com/VFbzqfoSff

A man was shot and killed during a confrontation between Black Lives Matter marchers who had blocked traffic and the driver of a vehicle that was obstructed by the procession. The chaos and panic that resulted was caught on video (above). 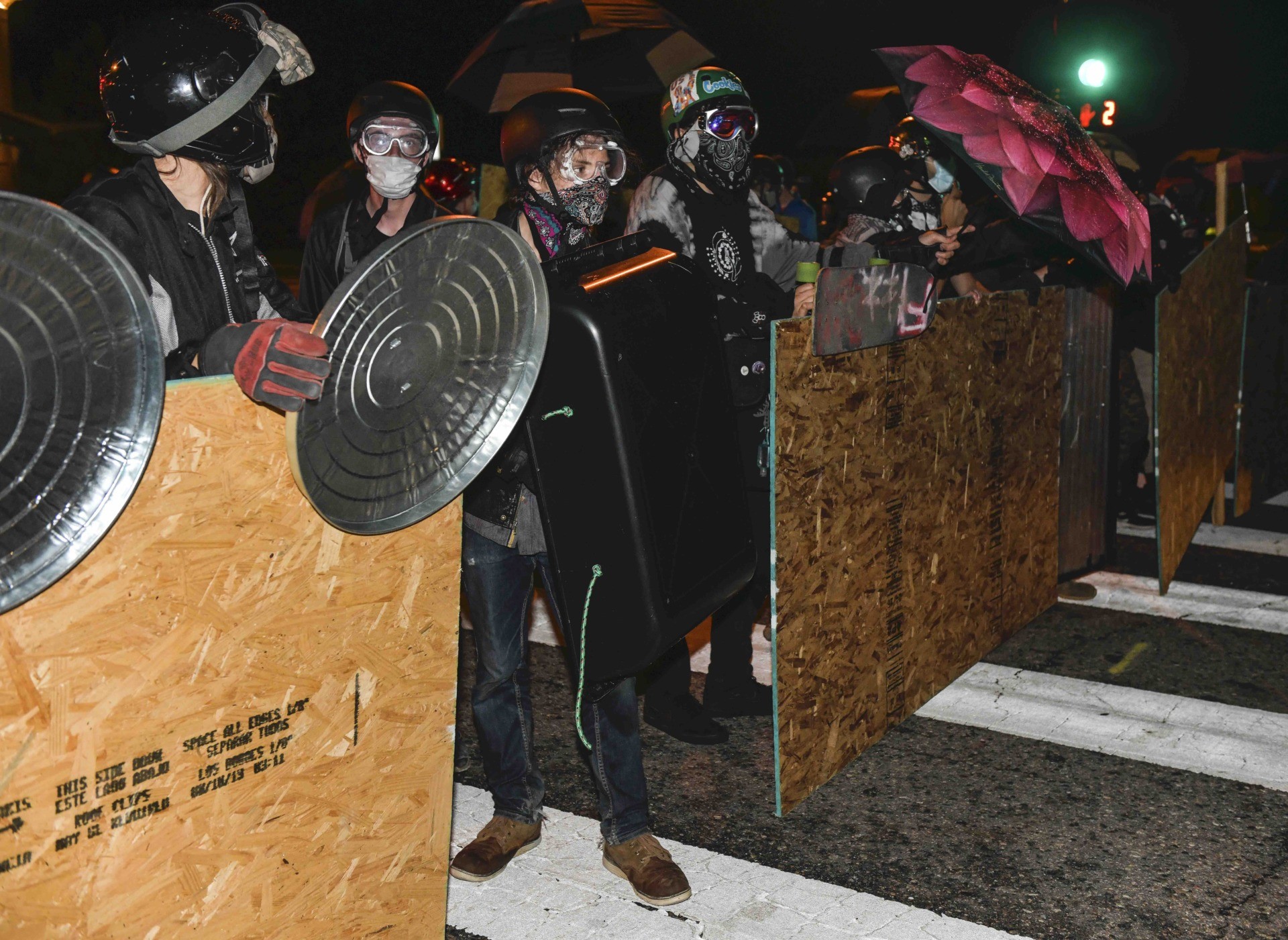 AURORA, CO – JULY 25: People stand behind a makeshift barrier outside the Aurora Police Department Headquarters while protesting the death of Elijah McClain on July 25, 2020 in Aurora, Colorado. On August 24, 2019 McClain was walking home when he was forcibly detained by three Aurora police officers and was injected with ketamine after officers requested assistance from the Aurora Fire Rescue. McClain suffered a heart attack on the way to the hospital that night and died six days later. (Photo by Michael Ciaglo/Getty Images)

Rioters attacked a local courthouse and a driver drove through a crowd in Aurora, injuring several peopls. One demonstrator fired a weapon at the driver, according to police, and hit another demonstrator. The rioters set several fires. 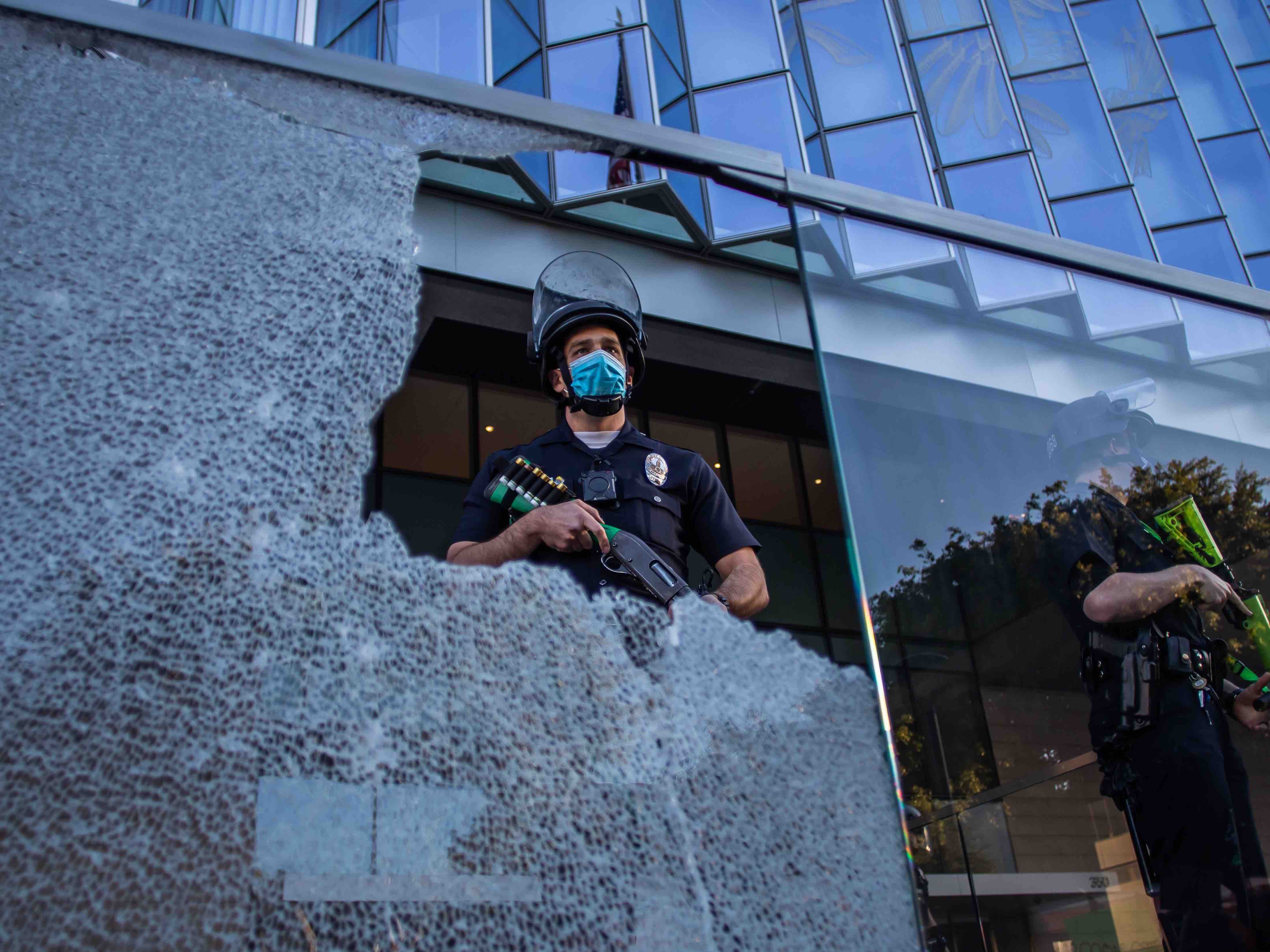 A Police officer is seen through a broken glass at the US Courthouse, damaged during a protest demanding justice for George Floyd, Breonna Taylor and also in solidarity with Portland’s protests, in Downtown Los Angeles, California, on July 25, 2020. (Photo by Apu GOMES / AFP) (Photo by APU GOMES/AFP via Getty Images)

Demonstrators smashed plate-glass windows at federal buildings and blocked traffic in downtown Los Angeles, one day after Mayor Eric Garcetti had reiterated his solidarity with the demonstrations in Portland, despite ongoing violence there. 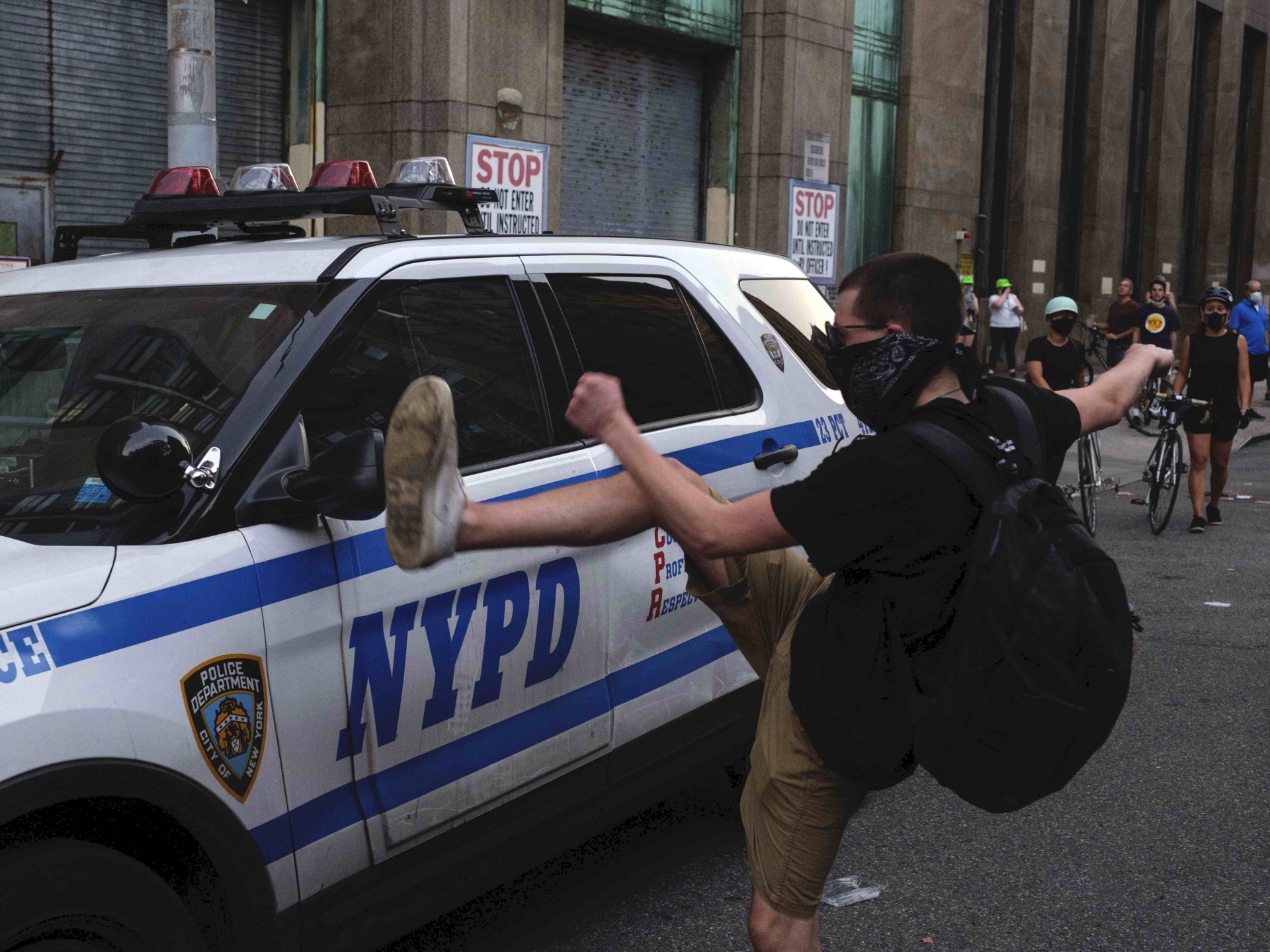 A protester kicks a police vehicle in an attempt to break its side mirror during a “Solidarity with Portland” protest Saturday, July 25, 2020, in New York. (AP Photo/Yuki Iwamura)

Thousands marched in New York City in solidarity with the Portland demonstrators. There were violent clashes with police (see above) as demonstrators attacked NYPD vehicles and scuffled with police officers in the streets. 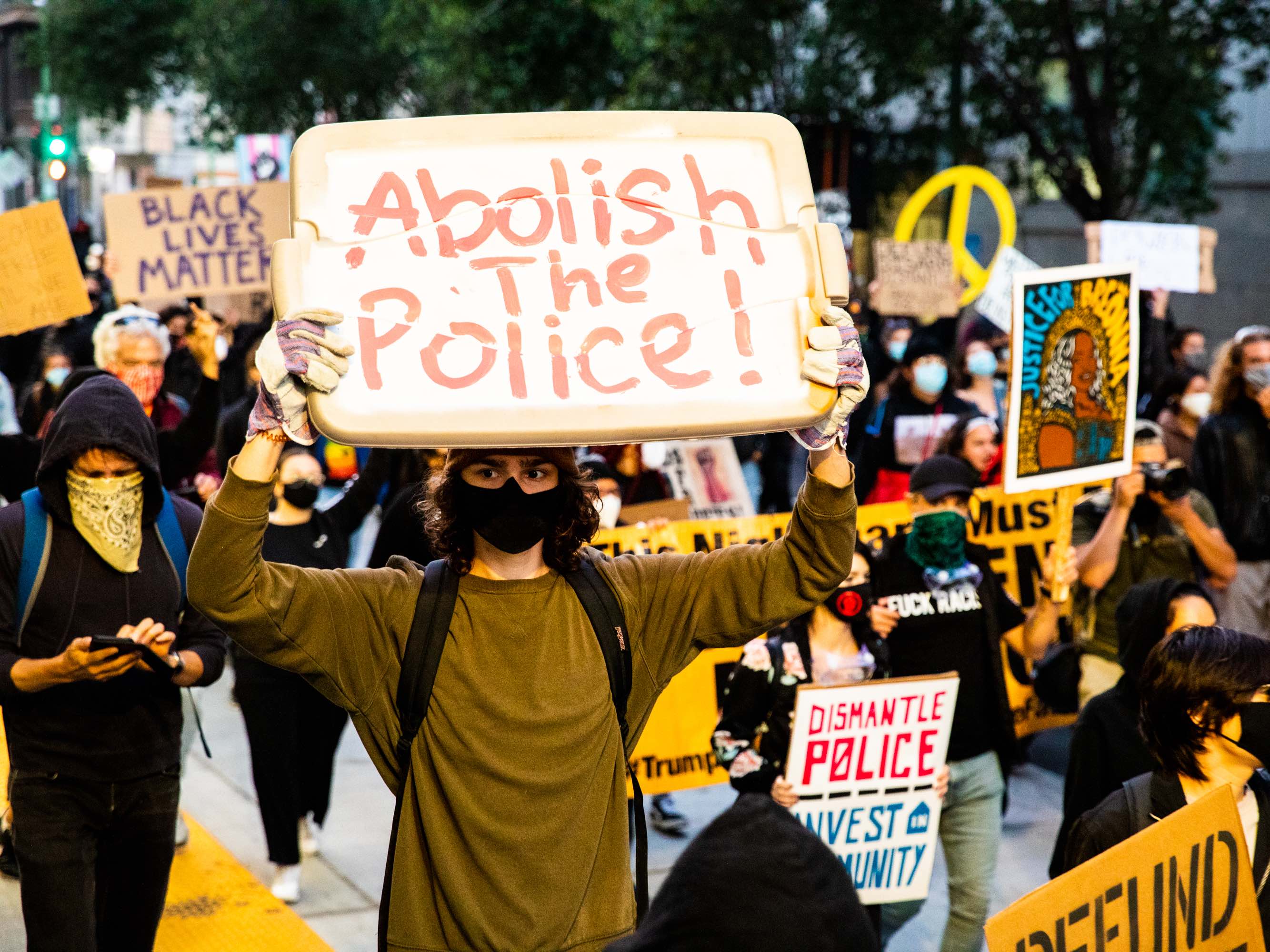 OAKLAND, CALIFORNIA – JULY 25: Protesters hold signs in support of defunding the police on July 25, 2020 in Oakland, California. Demonstrators in Oakland gathered to protest in solidarity with Portland protests. (Photo by Natasha Moustache/Getty Images)

Demonstrations turned violent as rioters attacked police; smashed windows at federal buildings and a bank; and fired fireworks at law enforcement. Marchers held signs such as “End Fascist USA” and “Abolish the Police.” 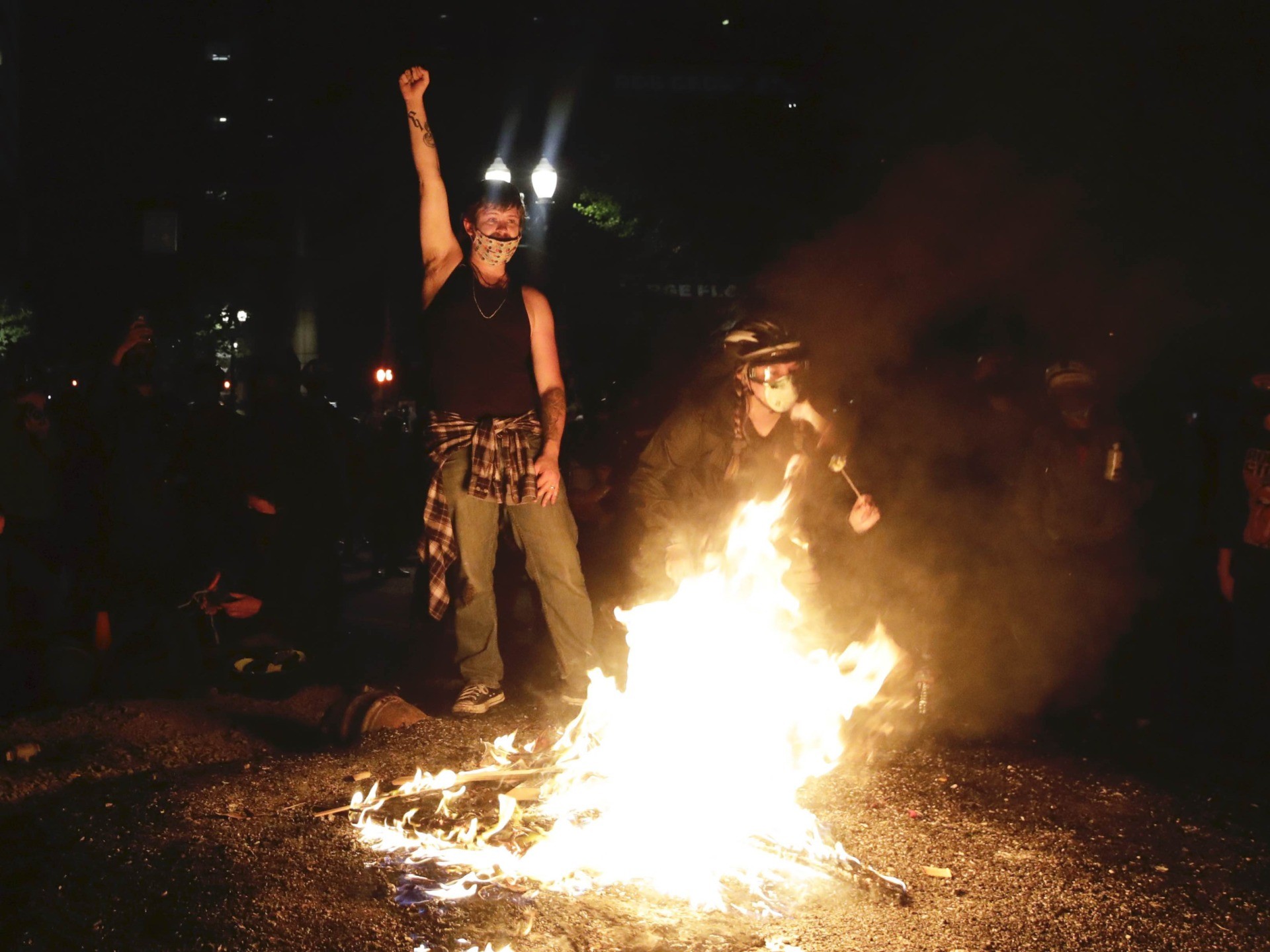 Violent demonstrations continued at the Mark O.Hatfield U.S. Courthouse as rioters set fires and provoked clashes with federal law enforcement, who fired tear gas and left the courthouse itself in pursuit of rioters to disperse the crowd. 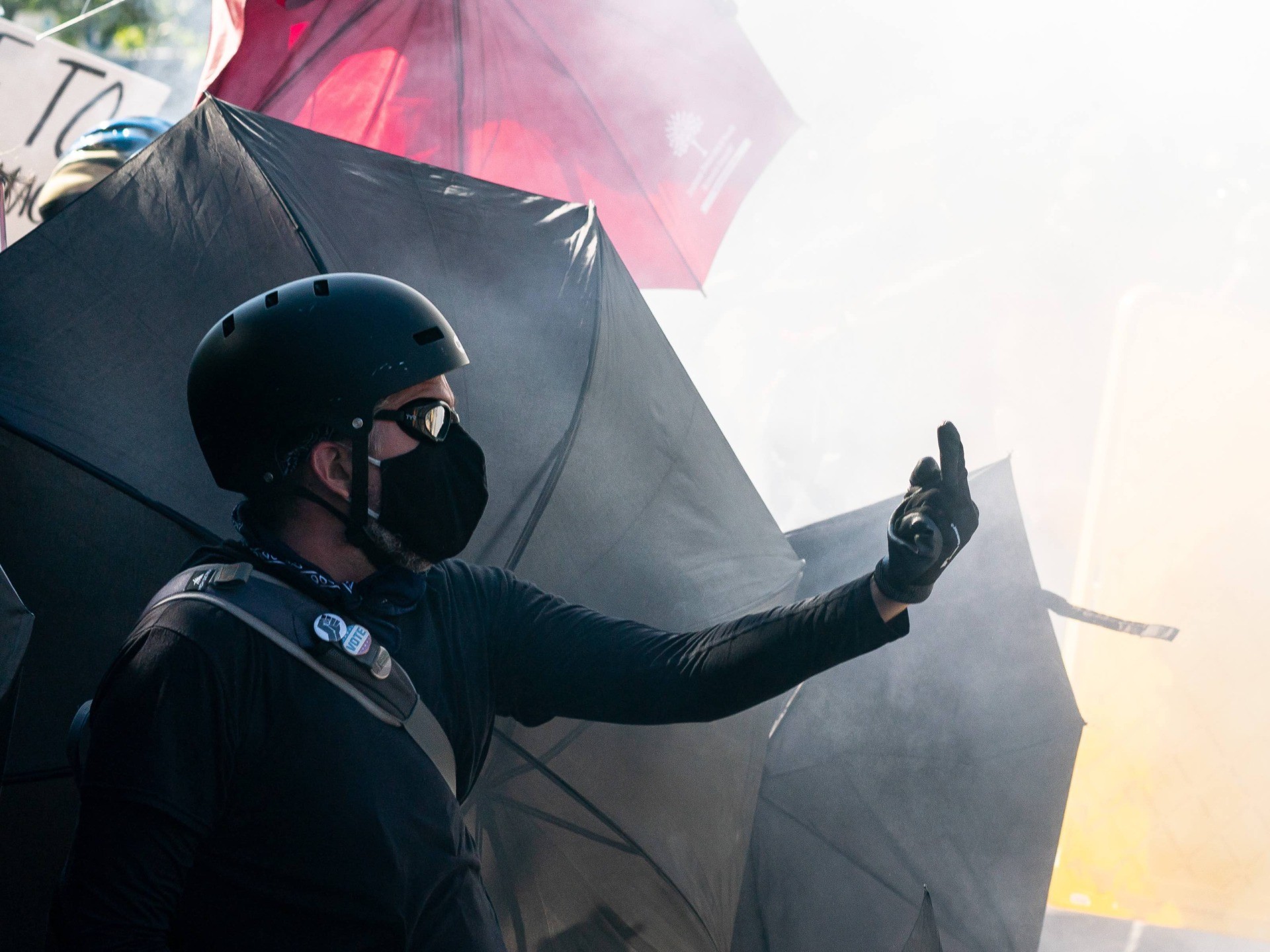 SEATTLE, WA – JULY 25: (EDITORS NOTE: Image contains profanity.) A demonstrator holds up a middle finger as police face off with demonstrators during protests in Seattle on July 25, 2020 in Seattle, Washington. Police and demonstrators clash as protests continue in the city following reports that federal agents may have been sent to the city. (Photo by David Ryder/Getty Images)

Police arrested 45 rioters on Saturday in the Capitol Hill neighborhood near the site of the former “CHOP” autonomous zones rioters threw explosives at law enforcement. Several businesses and public buildings were also vandalized.

There were protests in several other cities, including Omaha, Nebraska; Richmond, Virginia; and elsewhere.