Biden’s promise is included in his 2020 immigration platform, titled, “The Biden Plan for Securing Our Values as a Nation of Immigrants.” The document says:

As president, Biden will support family-based immigration by preserving family unification as a foundation of our immigration system; by allowing any approved applicant to receive a temporary non-immigrant visa until the permanent visa is processed;

“This is the equivalent to issuing temporary driver’s licenses to anyone who sends in an application,” said Jessica Vaughan, policy director for the Center for Immigration Studies. “They can have the temporary license until they come back for the road test,’ she said.

If Biden’s plan is adopted, “the sky would be the limit … and besides blowing up the numerical limits on annual immigration [it] would be an enormous boost to the fake-document and fake-marriage industry,” she said, adding:

We don’t (or at least we try not to) let people come live here before they have completed the entire [immigration] application and vetting process … Under the Biden-Harris system, people would simply create fake relationships to get the [initial immigration] petition approved, and then get their temporary visa to come here and just [quit] the application, knowing there is very little interior enforcement to make them go home later, when or if the fraud is discovered.

Each year, roughly four million Americans turn 18 and begin using their skills and diligence to earn wages and salaries.

But the federal government slashes their ability to earn wages and buy homes by delivering roughly one million legal immigrants — including about 600,000 workers — to employers around the United States.

The federal government also allows companies to import and keep roughly 1.3 million foreign contract workers in myriad white collar jobs. Those jobs, including many well paying Silicon Valley jobs, are needed by U.S. graduates to advance in their careers.

Congress also does little to deport illegals — or even to deter companies from employing roughly eight million illegal migrant workers.

These federal economic policies help companies and investors by inflating the labor supply, so raising the price of housing, and spiking government spending.

Yet at least 150 million more foreigners want to migrate into the United States.

The federal government does not set any limits on the annual inflow of legal immigrants’ minor children and elderly parents.

But there are limits — and so, waiting lines — for other categories of immigrants, such as adult children, married children, and siblings.

Overall, roughly 3.6 million would-be migrants are waiting in multiple lines, according to a November 2019 report by the Department of State. 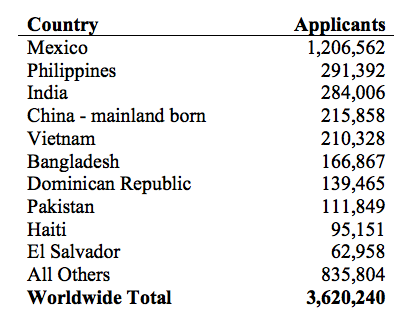 For example, more than two million additional people are waiting in the “Fourth Preference” — or F4 line — for the adult siblings of U.S. citizens, but only 65,000 are given green cards each year.

Similarly, the federal government awards 23,400 green cars for the married sons and daughters of green card and citizen immigrants. This “Third Preference,” or “F3,” waiting list includes 647,236 foreign sons and daughters — many of whom will also try to bring in their children and relatives once they are admitted into the United States.

Also, the government provides green cards to 23,400 adult children of new legal green card immigrants, who are not yet citizens. But federal data in November 2019 showed that this F2B  waiting list of 282,551 adult sons and daughters of green-card holders.