Sen. Kamala Harris’s dangerous evasion on China during her debate with Vice President Mike Pence avoided perhaps a most critical question, the answer to which could be determined by the outcome of this year’s election.

Will China’s negligence in unleashing the coronavirus and mendacity in exploiting it catalyze a reckoning with the People’s Republic of China, comparable to the Czech Coup of 1948 that crystallized America’s successful long-term determination to contain the Soviet Union? Or will China ultimately emerge as the winner from the devastation it has inflicted on the world, because of a deficit of strategic and moral clarity within the United States and among our allies?

On one hand, negative views of China have soared to a record high of 73 percent of Americans, according to a Pew Research Center poll released in late July 2020.

Chinese behavior during and since the coronavirus has also elicited strong negative reactions across the Indo-Pacific, especially in Japan, India, and Australia, where views of China’s ambitions and behavior already trended strongly in a negative direction. Even in Western Europe, long committed to engaging and conciliating rather than confronting China, COVID has generated an anti-China backlash, more muted on the continent but stronger in Britain where British Prime Minister Boris Johnson joined President Trump in imposing a complete ban on Chinese 5G vendor Huawei.

On the other hand, this contingent good news will prove ephemeral rather than enduring if the United States and our allies should waver in the reckoning with China that President Trump deserves credit for initiating. The reelection of President Trump offers the best practicable hope for building and intensifying the administration’s first-term strategy of contesting China comprehensively and vigorously — a vital condition for bolstering deterrence or defeating China at the lowest possible cost and risk should deterrence fail.

President Trump’s predecessor foolishly and dangerously said, “We welcome China’s rise,” and significantly shrank American defense spending — including our Ground-based Midcourse Defense System (GMD), the only U.S. missile defense system devoted to defending the U.S. homeland from long-range ballistic missile attacks — while China was armed prodigiously. The Obama administration’s national security statements of 2010 and 2015 even omitted naming China or any other great power as an adversary. 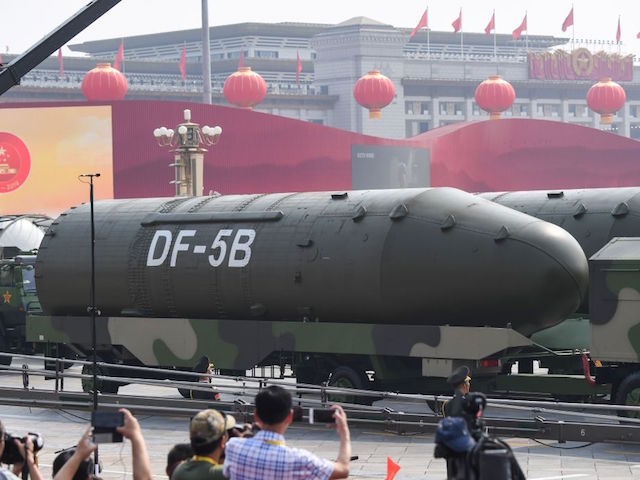 Military vehicles carrying DF-5B intercontinental ballistic missiles participate in a military parade at Tiananmen Square in Beijing on October 1, 2019, to mark the 70th anniversary of the founding of the Peoples Republic of China. (GREG BAKER/AFP/Getty Images)

By contrast, the Trump administration designated China from the outset as our number one adversary. The president has not only increased the American defense budget substantially, but invested in threshold technologies necessary to maintain American military preponderance as strategic defense and ordered the creation of an independent Space Force.

President Trump has pushed back hard against China’s implacable economic warfare against the U.S. on trade and intellectual property that his predecessors rationalized away. The president’s economic policies before COVID intervened had generated prodigious growth on which American military preeminence depends — including modernization and the ability to provide a security umbrella to maintain peace.

President Trump began, too, the long overdue decoupling of the U.S. economy from China’s, the imperative of which our inordinate dependence on China for essentials such as antibiotics has exposed in high relief during this pandemic. President Trump has strengthened relationships with a decent democratic India and Japan, vital, values-based allies who share our strategic priorities and alarm about the trajectory of China’s policies at home and abroad — relationships that his predecessor — with the support of his Vice President Joe Biden — allowed to languish while courting China and other adversaries. 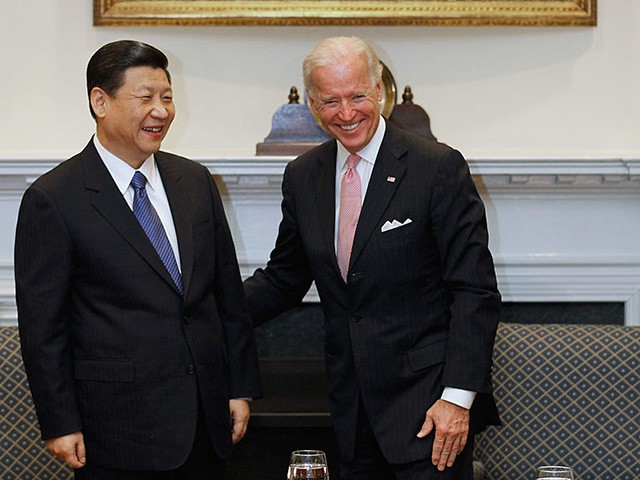 President Trump’s recalibration of our China policy that COVID has broadened, deepened, and accelerated is a good start, but only the end of the beginning of what is necessary for the United States and our allies to prevail. For all the considerable merits of President Trump’s approach towards China, the president would enhance the effectiveness of his policies by doing some recalibrating as well. The president’s rhetoric has undervalued the importance of American ideals in identifying friends, foes, threats, and opportunities. What happens in Hong Kong, for example, is not merely an internal matter as the president initially implied but a preview of what this regime has in mind for the world should the PRC achieve its goal of global hegemony.

Many Americans who are increasingly alarmed by China rightly advocate calling out China with no pale pastels on human rights, stressing the tyrannical nature of the Chinese regime, while championing the importance of a value-based alliance system of fellow democracies in the Indo-Pacific grounded firmly in geopolitics. This includes providing common protection from missile threats with platforms based on land, at sea, and in space.

The president’s spokesmen — particularly Secretary of State Pompeo and Vice President Pence — have done much better articulating this dimension of the contest with China than the president, whose actual policies on this and many other issues are often better than he makes them sound. A greater emphasis on human rights may also elicit greater support for sterner policies towards China from our allies in Western European, where resolve — especially in Germany — remains fragile at best despite disillusionment with China running much higher than usual.

A second-term Trump presidency also runs the risk of undermining the significant progress the administration achieved if the president decides to settle for a deal rather than stay the course. This temptation is not only organic to President Trump’s nature but will loom large for whoever becomes president because of the huge budget deficits that COVID has compounded. President Trump’s salutary hectoring for our allies to do more — yielding impressive results in Europe that President Obama and Vice President Biden failed to match — also runs the risk of reaching a culminating point counterproductive to forging a muscular strategic consensus actively countering China’s ambitions.

If President Trump loses, the odds drop from good to prohibitive that China loses more than it gains by unleashing and exploiting COVID. Granted, a recent Pew Research Center poll found that many Democrats as well as even more Republicans advocate tougher policies toward China on human rights and trade. An increasing number of prominent Democrats have become rhetorically more willing to criticize rather than conciliate China.

Even so, Joe Biden has a long record of advocating engagement with China while downplaying the idea that the PRC has become a serious strategic rival. Further, the leftward lurch of the current Democratic Party also does not inspire confidence that a Biden administration will follow through on President Trump’s policy of robust resistance towards China’s predatory behavior — economically and militarily.

On the contrary, former Sen. Biden had moved steadily in a more dovish direction on national security even before becoming President Obama’s vice president and cheerleading for Obama’s dangerous doctrine that President Trump has repudiated in its entirety. Neither Biden nor his surrogates said much of anything about China at the Democratic National Convention despite the urgency of addressing the paramount national security threat of our time. Harris’s refusal once again should appall and alarm everyone.

Furthermore, the recent revelations about Hunter Biden’s meretricious relationship with China — receiving millions for no discernible talent other than access to his father — feasts on steroids the grave concerns Americans should have about Vice President Biden’s lifelong propensity to accommodate Chinese tyranny so menacing to our ideals and self-interest. 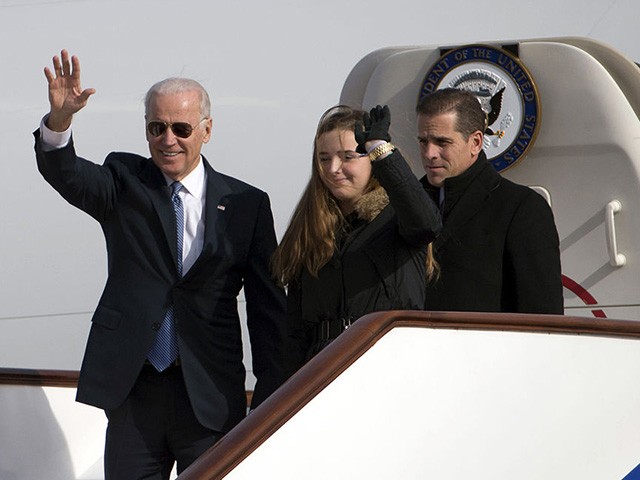 Vice President Joe Biden waves as he walks out of Air Force Two with his granddaughter Finnegan Biden and son Hunter Biden at the airport December 4, 2013, in Beijing, China. (Ng Han Guan/Getty Images)

Will a Democratic Party reluctant to condemn the breakdown of law and order in a growing number of municipalities its leaders have governed for decades — a party considering deep cuts in law enforcement amidst the mayhem — pursue the types of muscular national security strategies essential for credibly reassuring our terrified real (and prospective) allies in the Indo-Pacific that it is safer to stand up to China rather than to capitulate? Will a party committed to a vast expansion of government domestically — with deficits cascading, taxes poised steeply to increase if President Biden has his way — have the resources much less the inclination to spend enough on defense to counter China’s relentless military buildup aimed at driving the United States out of the Western Pacific? Will a Biden administration also — like President Trump’s — designate China’s grandiose ambitions and predatory behavior as danger number one and bolster our protective capabilities such as missile defense (as the President’s latest budget does)? Or will a President Biden and his party revert to the default position of the Obama-Biden administration, which considered climate change the paramount gathering danger, all the while welcoming China’s rise?

Granted, history furnishes ample examples of policies positively confounding expectations based on past experience. Recall the Truman administration’s decision to resist North Korea’s June 1950 attack on South Korea just six months after Secretary of State Dean Acheson seemed to exclude South Korea as a vital interest in his speech to the Washington Press Club in January 1950. Recall, too, the strategic metamorphosis of isolationist Sen. Arthur Vandenberg of Michigan into a stalwart supporter of President Truman’s policy of vigilant containment.

In Biden’s case, however, it would be a triumph of hope over experience to count on it. The current version of the Democratic Party has purged itself of all vestiges of the Truman/Scoop Jackson tradition of muscular Cold War liberalism congenial to President Trump’s vigilance towards China.

We must not tolerate Biden’s and Harris’s serial evasions on where they stand on China, the geopolitical elephant in the room and the paramount national security threat of our time. The future of freedom hinges on whether we confront or conciliate this diabolical predator that strives to displace the United States as the world’s dominant power.