Speaking to a packed crowd in Dimondale — a suburb of Lansing, Michigan — Donald Trump made a direct appeal to black Americans, asking: “What the hell do you have to lose” by supporting me? That was August 2016. The question caused consternation from the elite media. There weren’t enough fainting couches to go around. But as I chronicle in my new book, 50 Things They Don’t Want You to Know About Trump, black Americans, indeed, had a lot to gain from a Trump presidency.

1. Net New Women-Owned Businesses Added Per Day by Black Women Reached a Record High in 2018 and 2019

The average number of new women-owned businesses opened per day reached a record level in 2018, surging to 1,821. The number held steady in 2019, a year that saw an average of 1,817 businesses owned by women open per day. The data derives from U.S. Census Bureau Survey of Business Owners and was part of the annual State of Women-Owned Businesses Report, commissioned by American Express. A woman-owned business is defined as any firm that is “at least 51 percent owned, operated and controlled by one or more females,” American Express explains.

New businesses owned by black women represented the highest rate of growth of any group in the number of new firms between 2018 and 2019. Indeed, black women accounted for 42 percent of net new women business owners, in 2019 which is three times their share of the female population. A dizzying irony? The very subgroup of voters who were among those who supported President Trump’s election the least have in this instance benefited from his economic policies the most.

The town of Flint, Michigan, which the Census Bureau says is roughly 54 percent black, suffered a sad saga of lead-laced water for years. The crisis began in 2014. Barack Obama was president. The disaster burgeoned under decades of Democratic Party supremacy. Still, it quickly became one of the American Left’s favorite bludgeons to beat the only Republican around to blame, former Gov. Rick Snyder. 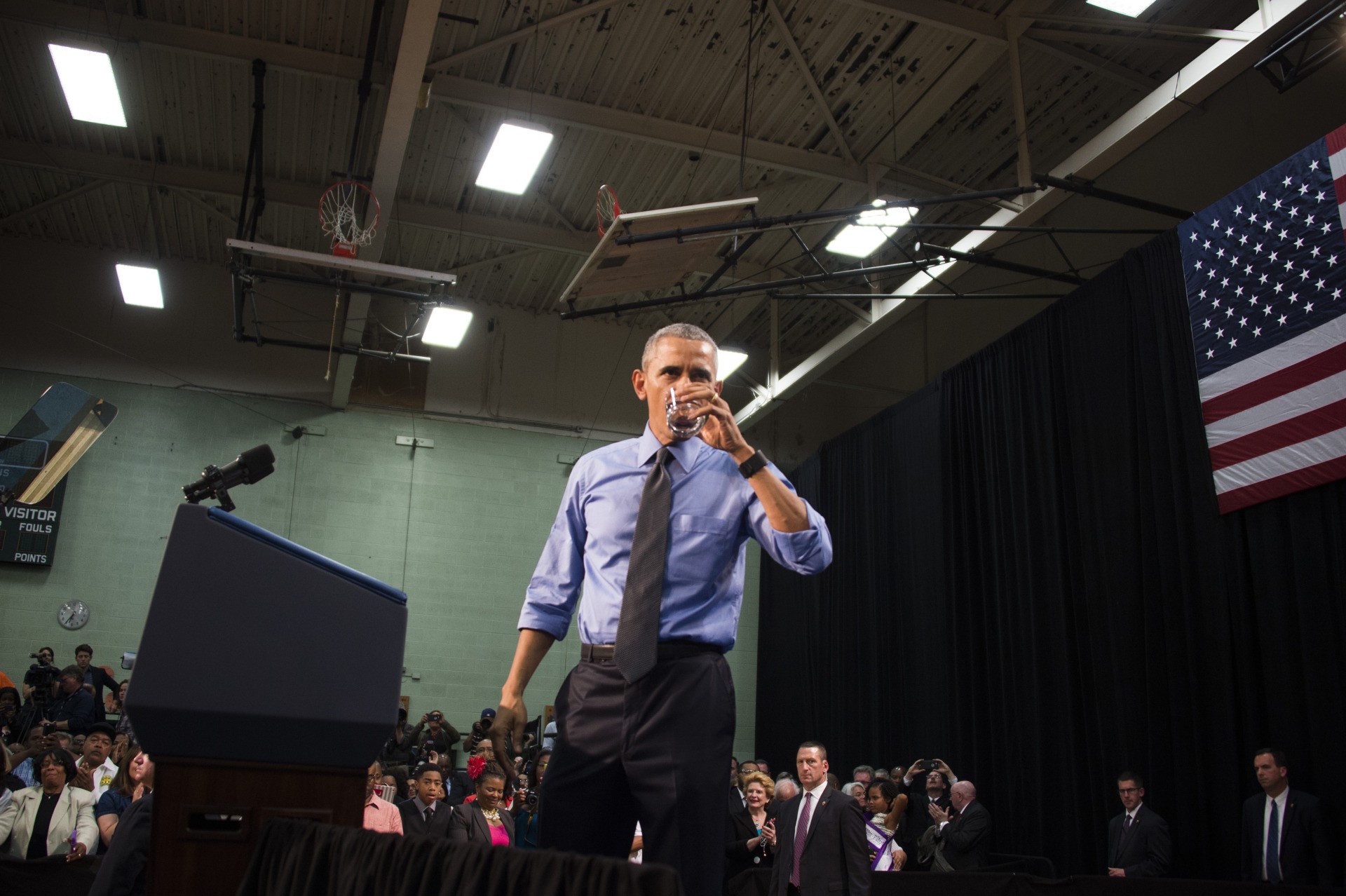 US President Barack Obama drinks a glass of water as he speaks at Flint Northwestern High School in Flint, Michigan, May 4, 2016 after meeting with locals for a neighborhood roundtable on the drinking water crisis. / AFP / Jim Watson (JIM WATSON/AFP via Getty Images)

The Oscar-winning documentary filmmaker blasted Obama for sipping filtered water during a May 2016 trip to Flint, Michigan, meant to reassure residents that the city’s lead-tainted drinking water was safe to consume.

It was still poison. … [H]e pretended to drink from a glass of water and then said that it wasn’t a stunt. And it was.

And it just put a knife in the heart of so many people in Flint who were hoping he would come with the Army Corps of Engineers, dig up these poison pipes, and replace the pipes in the city. And he didn’t do that. And then people gave up and a lot of people stayed home. They didn’t vote for Trump, but they just stayed home.

It wasn’t until March 2017 when President Trump’s Environmental Protection Agency awarded a $100 million grant to fund projects to replace Flint’s bad pipes. There were various bumps in the road, like in any big government project. By the spring of 2019, Flint’s water system was mostly fixed. You can go on social media today and find people complaining about dirty water in Flint but even Trump-bashing NPR conceded in April 2019, “tests have shown Flint’s tap water has improved greatly since the depths of the water crisis. Now, it’s well within federal and state standards for lead, even better than many other cities.”

3. The Trump Administration Struck a $1 Billion Deal to Provide HIV Prevention Drugs Free to 200,000 Uninsured Americans Every Year for the Next Decade

In February 2019, President Trump unveiled an ambitious plan to eradicate the transmission of HIV within a decade. “Together, we will defeat AIDS in America and beyond,” the president declared of the pandemic that has caused an estimated 32 million deaths worldwide between 1981 and 2018.
An estimated 1.1 million Americans had HIV in 2019. Another 40,000 Americans are diagnosed every year. Health and Human Services (HHS) projects that some 400,000 Americans will contract the deadly virus over the next decade.

While black Americans represent roughly 13 percent of the overall population, we accounted for 42 percent of new HIV diagnoses in 2018, according to CDC data. One in two gay black men in America will be diagnosed with HIV over the course of their lifetime, the CDC warned in 2016. The number of new cases of black women with HIV, which causes AIDS, has dropped by 40 percent in recent years, the agency said, but infection rates have seen a sharp increase among young gay men, especially blacks, according to 2016 CDC figures. “Blacks account for more new HIV infections, people estimated to be living with HIV disease, and HIV-related deaths than any other racial-ethnic group in the U.S,” the Kaiser Family Foundation concluded.

The president proposed, and Congress approved and appropriated in its 2020 fiscal budget, a historic $291 million to fund the first phase of the administration’s bold plan to end HIV. The administration’s initiative, known as Ending the HIV Epidemic: A Plan for America (EHE), seeks to reduce new U.S. HIV infections by 75 percent over the next five years and by 90 percent by 2030. By May 2019, Health and Human Services Secretary Alex Azar II had rolled out a new program, Ready, Set, PrEP. Azar also announced that his agency had secured a donation of drugs, worth billions, from Gilead Sciences, Inc. that would see the pharmaceutical company donate pre-exposure prophylaxis (PrEP) medication for up to 200,000 individuals each year for up to 11 years. A 30-day supply of the HIV prevention drug can carry a $2,000 price tag for people without insurance. HHS says, program participants are individuals without prescription drug coverage who have tested negative for HIV and have a valid on-label prescription for PrEP.

The Centers for Diseases Control and Prevention (CDC) estimates that in 2018 roughly 220,000 individuals had received a prescription for PrEP, which the agency says reduces the chances of contracting HIV through sex by up to 97 percent. Coverage, though, comes with a stark racial divide, the CDC claims. Coverage was particularly low among those groups who contract HIV at a disproportionately high rate: young gay and bisexual people and minorities, according to the agency. White Americans were estimated as being between four and seven times more likely to be covered for PrEP than their black and Latino counterparts, CDC data showed.

By March 2020, access to HIV PrEP medications were available to qualifying participants at CVS Health, Walgreens, and Rite Aid locations. The three companies, a combined total of more than 21,000 locations, donated their dispensing services to HHS as part of the national program to prevent the spread of HIV.

4. The Poverty Rate for Black Americans Dropped to an All-Time Low in 2018

The poverty rate for black Americans fell by 0.9 percentage points and by 0.8 percentage points for Hispanic Americans in 2018, the latest year for which data are available. Those figures represent, for both groups, the lowest levels of poverty ever recorded by the Census Bureau.

The poverty rate for both groups also hit record lows the previous year, with black poverty rates falling to 21.2 percent in 2017. The rate was expected by experts to fall to another historic low in 2019. That defies the Democrats’ chorus of doom and gloom about the economy. Just a few months after the Census Bureau reported record-breaking poverty declines, a Gallup survey assessing the economic mood of the nation found that 59 percent of Americans said they are better off financially than they were just a year earlier—and a staggering 74 percent said they will be even better off in 2020.

5. President Trump Has Allocated More Funding to Historically Black Colleges and Universities than Any Other President

In May 2017, President Trump promised “unwavering support” for the nation’s historically black colleges and universities (HBCUs). In December 2019, President Trump signed a bipartisan bill, known as the FUTURE Act. The law permanently reauthorized hundreds of millions of dollars in federal funding for America’s 102 historically black colleges and universities. 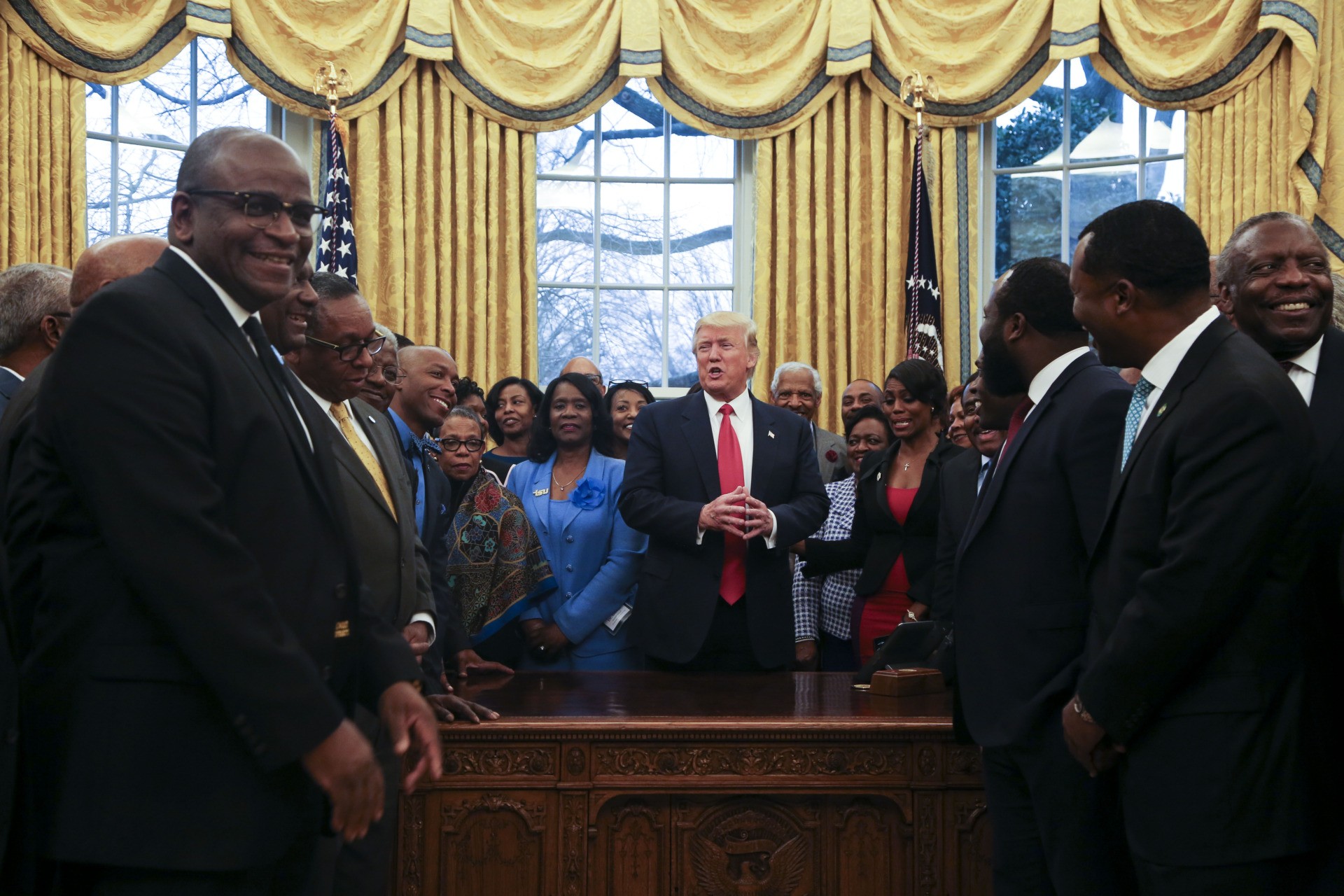 President Donald Trump poses with the Historically Black Colleges and Universities in the Oval Office of the White House, on February 27, 2017 in Washington, DC. (Aude Guerrucci-Pool/Getty Images)

College closures, declining enrollment, and scant finances contributed to the rising risk of these schools losing their accreditation. Trump vowed to break the logjam in Congress over the funding for HBCUs. By the end of 2018, he had appropriated more than $360 million to these institutions. The massive figure put him in the record books as having allocated more money to HBCUs than any other president in history.

Michael Lomax, the president and CEO of the United Negro College Fund (UNCF), praised the president and the thousands of advocates responsible for getting the legislation turned into law. “We enlisted more than 20,000 supporters to write and call their members of Congress. This activated army of advocates [who] became the frontline of support for HBCUs, and they won the battle for our institutions,” Lomax said.

This article contains excerpts from 50 Things They Don’t Want You to Know About Trump, the new book by Breitbart News Entertainment Editor Jerome Hudson.

Jerome Hudson is Breitbart News Entertainment Editor and author of the forthcoming book 50 Things They Don’t Want You to Know About Trump. Order your copy today. Follow Jerome Hudson on Twitter @jeromeehudson