California’s high-speed rail project is not dead — yet. Although Gov. Gavin Newsom canceled the L.A.-to-San Francisco route in 2019, the project is hoping President Joe Biden will restore nearly $1 billion yanked by the Trump administration.

Voters approved the initial bond funding for the high-speed rail project in 2008, under Proposition 1A. The newly-elected Obama administration spent billions of dollars on high-speed rail under then-Vice President Joe Biden’s leadership in the 2009 stimulus bill, though none of the projects amounted to much. Only California, under then-Gov. Jerry Brown, took high-speed rail seriously — though cost overruns, environmental concerns, and right-of-way concerns delayed the project. 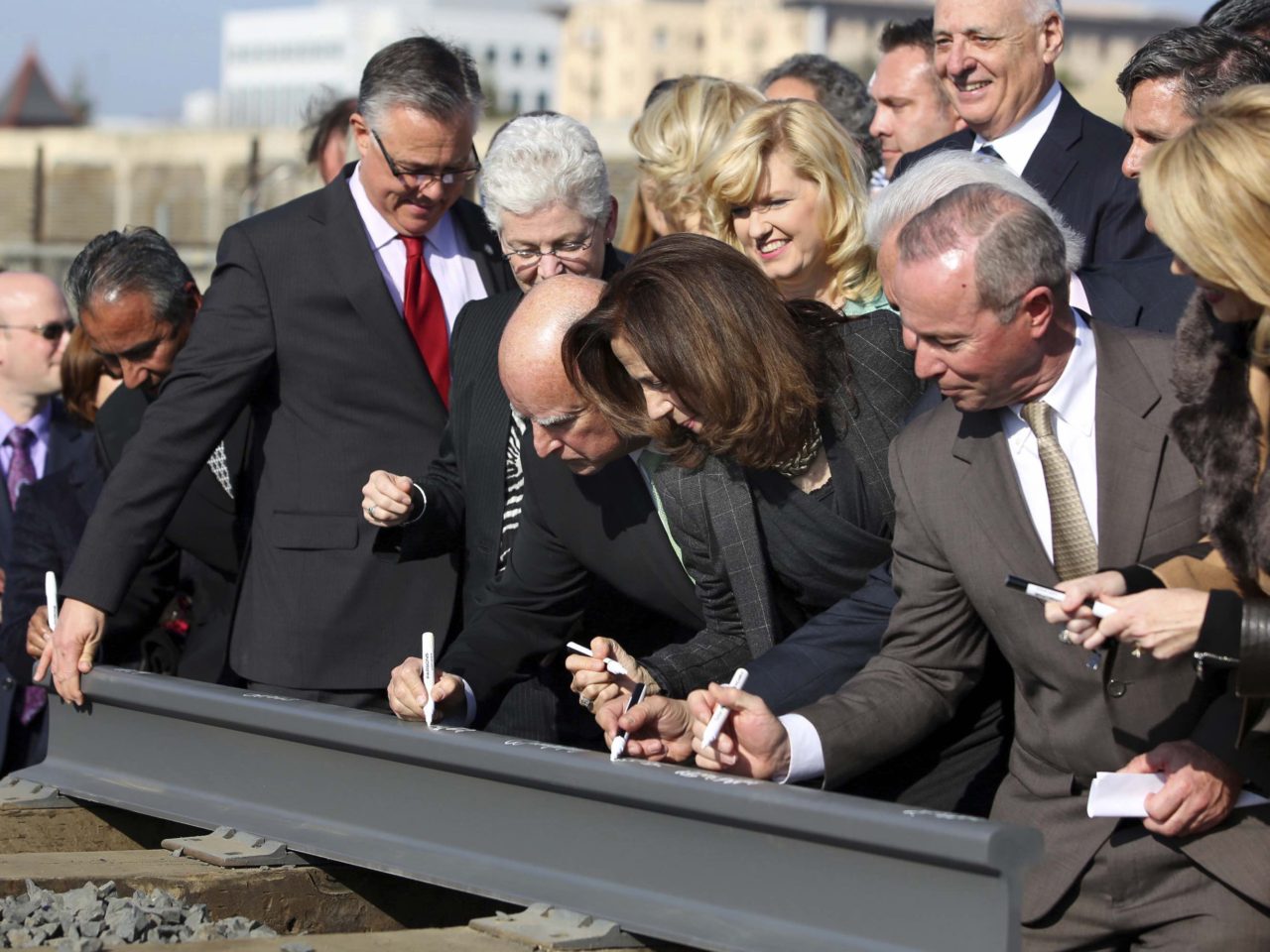 FILE – In this Jan. 6, 2015 file photo, Gov. Jerry Brown, center, and his wife, Anne Gust Brown, fourth from right, sign a portion of a rail at the California High-Speed Rail Authority groundbreaking event as Gina McCarthy, administrator of the U.S. Environmental Protection Agency, standing next to Brown at left, watches in Fresno, Calif. As his fourth and final term winds down Brown will spend the final 17 months in office working on California’s housing crisis and fighting for ambitious projects to build a high-speed rail system and re-engineer California’s water system. (AP Photo/Gary Kazanjian, File)

[O]ver time, the project grew more and more expensive, rising from an initial estimate of $37 billion in 2008 to nearly $100 billion according to an estimate last year. In 2014, Breitbart News revealed that the “high-speed” train would not be so “high-speed” after all, running slower on tracks from San Jose to San Francisco, and from the San Fernando Valley into downtown Los Angeles. The earliest the project might have been completed was in 2033.

In 2019, newly-installed Gov. Newsom announced to the state legislature in his “State of the State” speech that the high-speed rail project would effectively be canceled, because it “would cost too much and, respectfully, would take too long.” He promised, however, that the state would still build a portion of the line under construction in the rural Central Valley.

Then-President Donald Trump did something few presidents had done before: he demanded that California return federal money it had taken for the project, since it was no longer planning to deliver on its promises. He canceled a $929 billion grant from the U.S. Department of Transportation, and tweeted: “California has been forced to cancel the massive bullet train project after having spent and wasted many billions of dollars. They owe the Federal Government three and a half billion dollars. We want that money back now. Whole project is a “green” disaster!” Gov. Newsom resisted, to no avail.

Now, the Sacramento Bee reports, the California High-speed Rail Authority is hoping to proceed with the project, using $4.1 billion in state bond funds. It also hopes that President Biden will reverse Trump’s decision, and that newly-installed Secretary of Transportation Pete Buttigieg will restore the grant — even though the train will only connect rural counties.

Critics are skeptical of the idea of a “mini-bullet train.” Dan Walters of CalMatters wrote on Wednesday: “By 2030, according to a new state plan, Californians will be able to ride high-speed trains — but only between Merced and Bakersfield. … Is that worth the $20-plus billion that such a limited system would cost? Would it even attract enough passengers to cover its operating costs without the subsidies that the 2008 ballot measure banned?”

“Hoping that the federal government will come in and save your asses is not a business plan,” said David Schonbrunn, president of the non-profit Transportation Solutions Defence and Education Fund (TRANSDEF), as quoted by the Bee.