The Republican Study Committee (RSC) is publishing a new memo on Thursday that will expose several immigration proposals from their Democrat counterparts that the conservative bloc of House members says will make the burgeoning crisis at the U.S. border with Mexico even “worse” than President Joe Biden already has.

The one-page memo, obtained exclusively by Breitbart News ahead of its public release, details how Biden has unleashed a crisis on the border—and then how various Democrat proposals will make it worse. The memo is designed to arm up Republican lawmakers with talking points and information so they can fight the various immigration proposals from the Dream Act amnesty to the farm amnesty and more that Democrats are attempting to ram through Congress in the coming days and weeks. The RSC’s chairman, Rep. Jim Banks (R-IN), has made fighting illegal immigration and Biden’s and Democrats’ amnesty pushes a central part of the RSC’s agenda.

“DHS recently announced that officials should no longer use the terms ‘alien’ or ‘illegal’ to describe illegal aliens,” the memo opens. “There are now only ‘undocumented noncitizens,’ so illegal immigration can’t be a problem—that’s how their fantasy goes. The problem with acting as if illegal immigration is good, is that eventually you collide, headfirst, with reality: illegal immigration causes suffering. The Biden admin can ‘imagine there’s no borders,’ but that doesn’t change the fact that 73% of voters are concerned about the border crisis. Until Democrats are forced to confront political reality in 2022, they seem determined to ignore the humanitarian crisis and widespread suffering they created and sip margaritas in their alternate reality. RSC previously outlined how the crisis on our border can be 100% traced back to Joe Biden’s immigration executive orders.That is no longer the case. Joe Biden had to deploy FEMA to our border last week and House Democrats responded by introducing TWO am- nesty bills. As AP’s Julie Pace explained, the Biden administration claims that illegal immigrants don’t have an ‘open invitation’ to come to the U.S., but, ‘that’s not the message that’s actually being received,’ at our border.”

The memo argues that Biden’s actions, despite rhetoric saying the border is not open, indicate a willingness to accept migrants in droves despite them not coming to the United States legally. What’s more, Biden and his Democrat allies on Capitol Hill offering up multiple amnesties legislatively sends an even worse message to those who seek to illegally enter the United States.

“What kind of message does TWO amnesty bills send?” the memo continues. “When H.R. 6 hits the House floor, illegal immigration will rise even more, and the Border Crisis and Democrats’ amnesty push will become undistinguishable. Because: Biden’s Border Crisis IS AN AMNESTY CRISIS. Democrats haven’t just refused to reverse the policies that caused the border crisis—they are introducing new policies that are meant to make the Border Crisis worse. RSC’s job is to shake Democrats awake and convince them they have no choice but to end the Border Crisis. So, please, use the below fact sheet to explain to your constituents just how disastrous Biden’s amnesty bills will be.”

The memo then breaks out several specific pieces of what it calls “Biden’s immigration legislation.” The first, H.R. 6 or the “American Dream and Promise Act,” is an amnesty for millions of so-called “dreamers.”

“H.R. 6 would provide amnesty for so-called Dreamers, to recipients or potential recipients of Temporary Pro- tected Status (TPS) and Deferred Enforced Departure (DED), and children of certain nonimmigrant visa holders,” the memo says about this bill. “A total of roughly 2 million illegal immigrants would receive amnesty.”

The Democrat Dream Act would, according to the memo, “increase budget deficits by $26.3 billion over the 2020-2029 by allowing formerly illegal immigrants to receive federal assistance” and “allow the Secretary to waive inadmissibility grounds on health-related grounds (such as having a communicable disease of public health significance)” as well as “establish a difficult standard for denying green cards to criminal gang members, so much so that the individual Secretary of DHS himself or herself would have to issue denials.”

The second Biden and Democrat amnesty plan that the RSC memo exposes is H.R. 1603, the “Farm Workforce Modernization Act.” This bill, according to the RSC memo, would “grant amnesty to over 1 million unlawful illegal alien agricultural workers and their dependents.”

“Agricultural worker is defined as someone who’s worked 180 days over 2 years in agriculture,” the RSC memo says of the bill. “That’s equivalent to a 5.6-hour workday.”

Even criminal illegal aliens convicted of two misdemeanors, like two DUIs, would be eligible for amnesty under the farm amnesty plan according to the RSC memo.

The third Biden amnesty bill exposed in the RSC memo is the much broader amnesty for every illegal alien in America. That bill, the “U.S. Citizenship Act of 2021,” would according to the RSC “immediately” grant amnesty to all of the approximately 22 million illegal aliens in America. They would “become ‘Lawful Prospective Immigrants’ and be eligible for work authorization and SSNIs” right off the bat and then “after 5 years they’d receive a green card.”

The broader amnesty plan also includes a fast-track for some illegal aliens in specialized groups.

“So-called Dreamers, TPS holders, and immigrant farmworkers who performed 400 workdays of agricultural labor over the past 5 years, as well as their spouses and children, would be eligible to receive green cards immediately under the legislation, then citizenship after 3 years,” the RSC memo says.

It also allows previously deported illegal aliens a chance to come back and get amnesty.

“Illegal aliens that were deported during the Trump administration that lived in the U.S. for three years prior to their deportation could return to the United States,” the RSC memo says of the broader Biden amnesty plan, adding that it also “reduces immigration restrictions on criminals by shrinking the types of adjudications that would constitute a ‘conviction’ under the Immigration and Nationality Act.”

The bill also “eliminates per-country employment visa caps,” and “over the next 10 years, Biden’s immigration bill would double our legal immigration levels and lead to an extra 37 million immigrants moving to the U.S.”

“That’s more than the entire population of California,” the memo concludes. 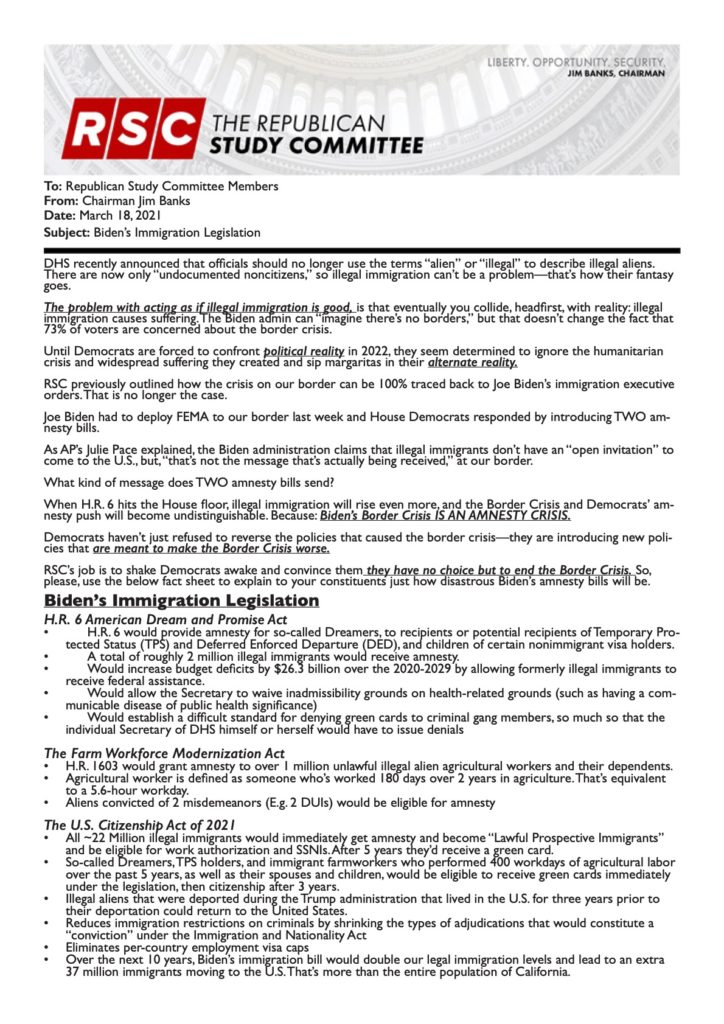