Charlottesville, Virginia, Mayor Nikuyah Walker published a poem Wednesday comparing her own city to a rapist.

Before we go any further, let me point out one very important fact: Charlottesville has been run exclusively by Democrats and extreme leftists like Walker (who is officially listed as an Independent) for more than 40 years.

Walker is so far to the left, she won the endorsement of the Democratic Socialists of America.

Charlottesville has not had a Republican mayor in over 40 years.

Leftists have been exclusively in charge of Charlottesville for more than 40 years.

So, if Charlottesville is a rapist, who created and nurtured and raised this rapist?

But that’s what the elected mayor of this city believes, that her own city is a rapist. She said so in a poem. Here are some excerpts:

She initially posted the full poem to her Facebook page late Wednesday night, but then the fascists at Facebook took it down for violating community standards (which should not have happened), and then Facebook apparently backed off.

To defend her poem, on Facebook she wrote things like, “Never force anything. Just let it be. If it’s meant to be, it will be,” and “My art doesn’t understand you either.”

Believe me, lady, I understand your “art” entirely. Comparing your own city to a rapist is not exactly subtle.

As of now, her Facebook page looks to be scrubbed of all references to the poem. Her Twitter excerpts are still posted. I’m posting screen shots in case she removes them. 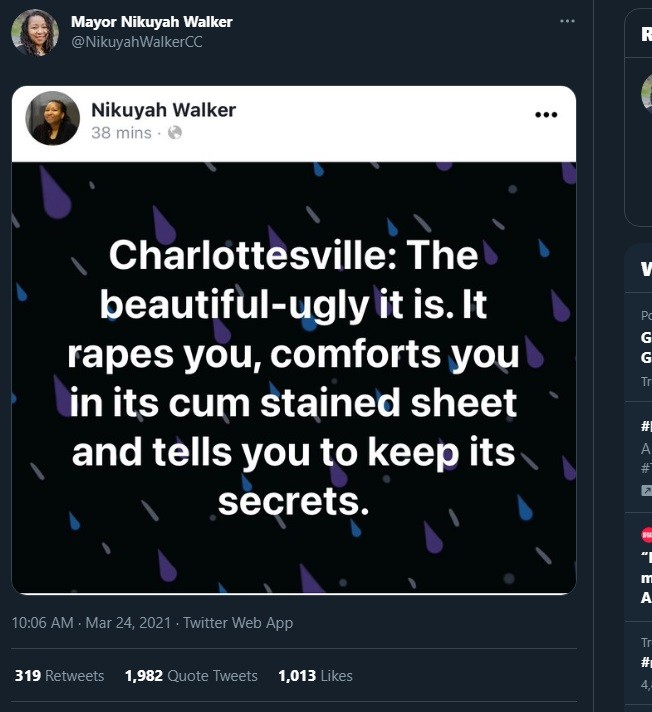 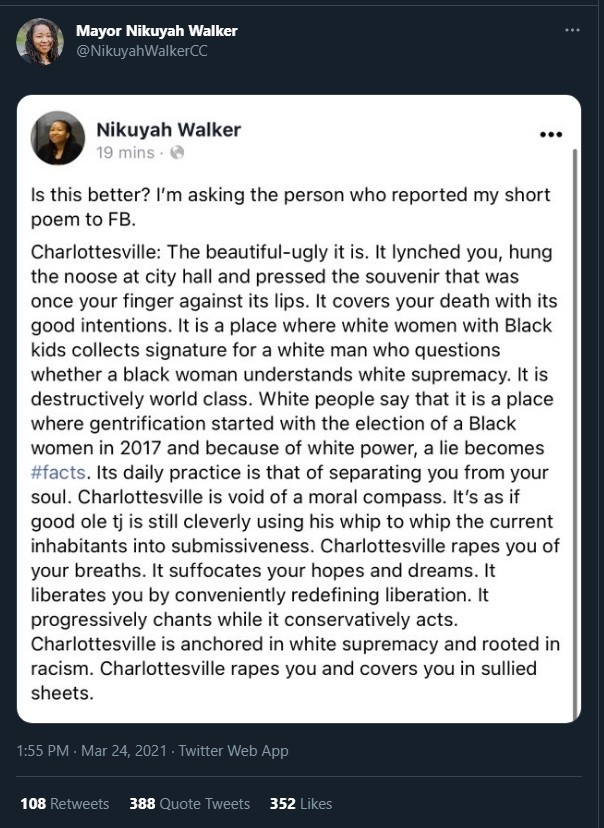 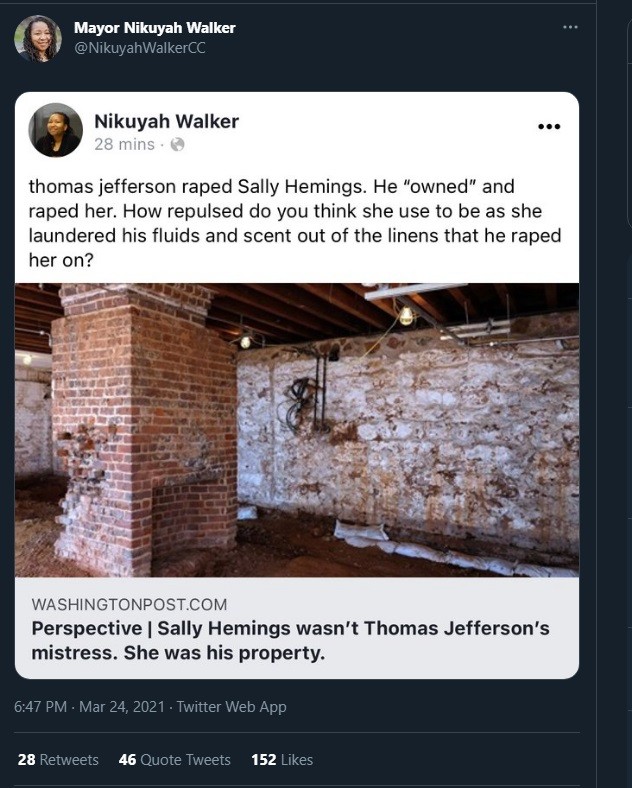 Charlottesville: The beautiful-ugly it is. It lynched you, hung the noose at city hall and pressed the souvenir that was once your finger against its lips. It covers your death with its good intentions. It is a place where white women with Black kids collects signature for a white man who questions whether a black woman understands white supremacy. It is destructively world class. White people say that it is a place where gentrification started with the election of a Black women in 2017 and because of white power, a lie becomes #facts. Its daily practice is that of separating you from your soul. Charlottesville is void of a moral compass. It’s as if good ole [Thomas Jefferson] is still cleverly using his whip to whip the current inhabitants into submissiveness. Charlottesville rapes you of your breaths. It suffocates your hopes and dreams. It liberates you by conveniently redefining liberation. It progressively chants while it conservatively acts. Charlottesville is anchored in white supremacy and rooted in racism. Charlottesville rapes you and covers you in sullied sheets.

The motive behind all this might be a scandal the mayor has found herself in. She’s under investigation by the city council — the same city council that voted to make her mayor — for misusing taxpayer money. She gave gift cards to people who spoke at her events about racial equity.

How does a population become so broken it votes for a city council that would vote to make someone mayor who compares the city she’s in charge of to a rapist?

How do the people of a city become so stupid they end up with a mayor who so hates the very city she’s in charge of, she compares it to — of all things — a rapist?

There was a time when I had a lot of sympathy for people stuck in these shithole Democrat-run cities, and that’s because I’ve lived in a few myself, but over and over and over again the voters of these cities prove that this is how they want to live, how they choose to live.

But have you noticed how it’s the very same people who vote for lunatics like Walker who smear Trump voters as violent and racist and anti-environment. And yet, out where we Trump voters lives, out here in Rural America, our air is clean, our water is clean, there are no mass-shootings, no hate crimes, and although we all own guns, there’s no gun violence crisis. We live together in safety and brotherhood.

The people of Charlottesville deserve Nikuyah Walker. They got exactly what they voted for, and they deserve her.

Good luck improving your quality life with a mayor who so hates your city she sees it as a rapist.