The National Aeronautic and Space Administration (NASA) documented the first successful flight of an aircraft over another planet as the Ingenuity helicopter flew 10 feet above the surface of Mars for 39 seconds on Monday.

“Ingenuity is the latest in a long and storied tradition of NASA projects achieving a space exploration goal once thought impossible,” acting NASA Administrator Steve Jurczyk said in the NASA report.

“The X-15 was a pathfinder for the space shuttle. Mars Pathfinder and its Sojourner rover did the same for three generations of Mars rovers. We don’t know exactly where Ingenuity will lead us, but today’s results indicate the sky – at least on Mars – may not be the limit.” 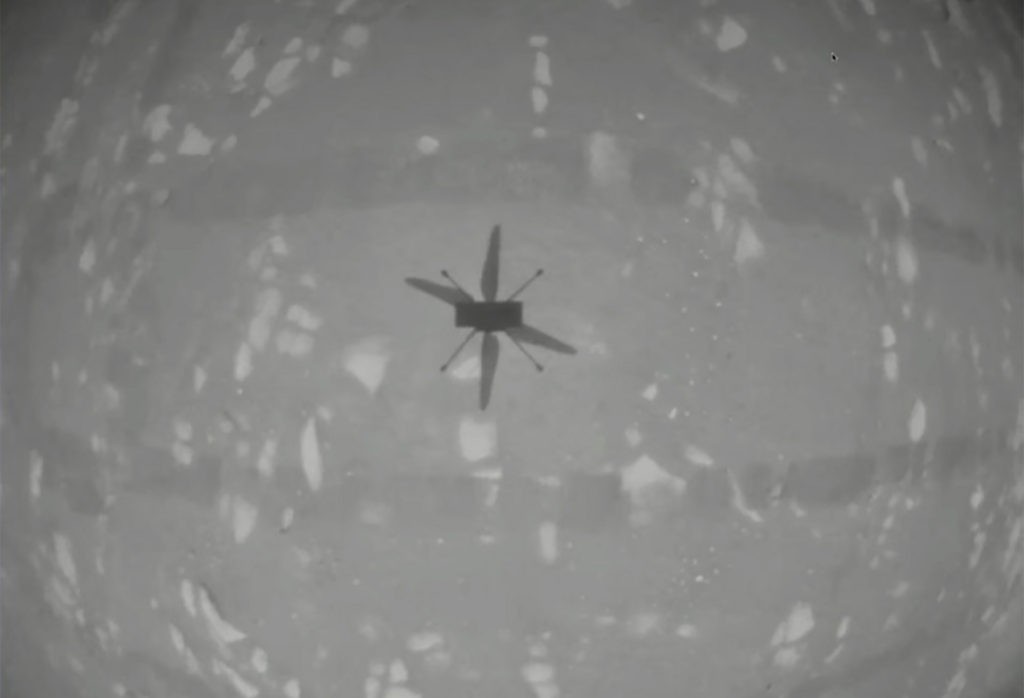 In this image from NASA, NASA’s experimental Mars helicopter Ingenuity hovers above the surface of Mars Monday, April 19, 2021. The little 4-pound helicopter rose from the dusty red surface into the thin Martian air Monday, achieving the first powered, controlled flight on another planet. (NASA via AP)

“Now, 117 years after the Wright brothers succeeded in making the first flight on our planet, NASA’s Ingenuity helicopter has succeeded in performing this amazing feat on another world,” NASA Associate Administrator for Science Thomas Zurbuchen said about naming the airfield where the flight took place. “While these two iconic moments in aviation history may be separated by time and 173 million miles of space, they now will forever be linked. As an homage to the two innovative bicycle makers from Dayton, this first of many airfields on other worlds will now be known as Wright Brothers Field, in recognition of the ingenuity and innovation that continue to propel exploration.”

The NASA report continued about the project, developed by Jet Propulsion Laboratory in Pasadena, California:

Because data must be sent to and returned from the Red Planet over hundreds of millions of miles using orbiting satellites and NASA’s Deep Space Network, Ingenuity cannot be flown with a joystick, and its flight was not observable from Earth in real time.

As one of NASA’s technology demonstration projects, the 19.3-inch-tall (49-centimeter-tall) Ingenuity Mars Helicopter contains no science instruments inside its tissue-box-size fuselage. Instead, the 4-pound (1.8-kg) rotorcraft is intended to demonstrate whether future exploration of the Red Planet could include an aerial perspective.

This first flight was full of unknowns. The Red Planet has a significantly lower gravity – one-third that of Earth’s – and an extremely thin atmosphere with only 1% the pressure at the surface compared to our planet. This means there are relatively few air molecules with which Ingenuity’s two 4-foot-wide (1.2-meter-wide) rotor blades can interact to achieve flight. The helicopter contains unique components, as well as off-the-shelf-commercial parts – many from the smartphone industry – that were tested in deep space for the first time with this mission.

“We have been thinking for so long about having our Wright brothers moment on Mars, and here it is,” MiMi Aung, project manager of the Ingenuity Mars Helicopter at JPL, said in the NASA report. “We will take a moment to celebrate our success and then take a cue from Orville and Wilbur regarding what to do next. History shows they got back to work – to learn as much as they could about their new aircraft – and so will we.” 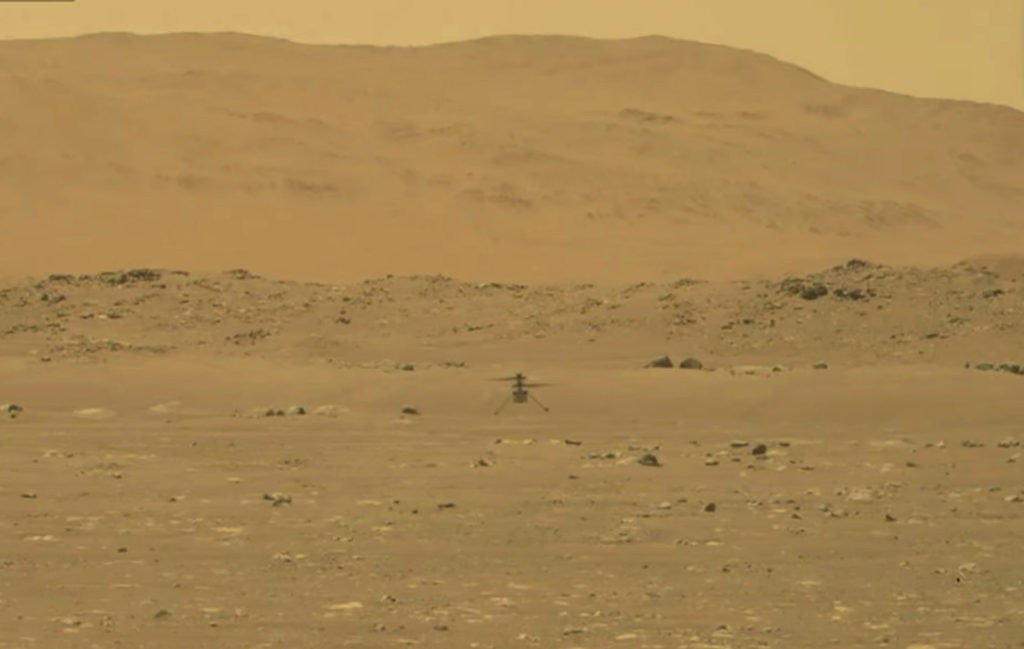 In this image from NASA, NASA’s experimental Mars helicopter Ingenuity lands on the surface of Mars Monday, April 19, 2021. The helicopter rose from the dusty red surface into the thin Martian air Monday, achieving the first powered, controlled flight on another planet. (NASA via AP)

“NASA now plans to fly higher and farther, pushing the limits of Ingenuity’s design, which ultimately may lead to a crash landing. If those experiments are a success, NASA officials have said they expect to send more aircraft to Mars on future missions,” United Press International reported. “Ingenuity’s dual rotors are 4 feet long and made of lightweight carbon fiber composite. To cope with the thin air on Mars, they rotate at 2,500 revolutions per minute, which compares to helicopters on Earth that function at 400 to 500 revolutions per minute.”