Six illegal aliens accused of killing Americans have been removed from the Department of Homeland Security’s (DHS) Immigration and Customs Enforcement (ICE) “Most Wanted” list.

This week, DHS Secretary Alejandro Mayorkas announced that ICE’s Victim Of Immigration Crime Engagement (VOICE) office, which served Angel Families in navigating their cases, would be disbanded in order to create the Victims Engagement and Services Line (VESL) which will expand to include providing benefits to illegal aliens who claim to be crime victims.

Following the announcement, as the Center for Immigration Studies’ Jon Feere first noted, top DHS officials removed six criminal illegal aliens accused of killing American citizens from ICE’s Most Wanted list — that is illegal alien fugitives who have yet to be captured by the agents.

In April 2019, ICE placed illegal aliens Saul Chavez, Jesus Maltos-Chacon, Alan Jacob Mogollon-Anaya, Edwin Mejia, Gonzalo Harrell-Gonzalez, and Luis Alberto Rodriguez-Castro on its Most Wanted list after each was charged with killing an American citizen and subsequently was evading arrest and criminal charges.

ICE detailed each case, at the time, and named each American victim:

Saul Chavez, a Mexican national charged in Cook County, Illinois, with vehicular homicide resulting in the death of William Dennis McCann, 66. Despite a detainer lodged by ICE Enforcement and Removal Operations in November 2011 following his arrest, Chavez was released from Cook County custody. Chavez, who entered the country without inspection at an unknown place and unknown time, is wanted by ICE as an illegal alien in addition to being a criminal fugitive.
[Emphasis added]

Jesus Maltos-Chacon, a Mexican national, charged in Baton Rouge, Louisiana, with homicide and vehicular manslaughter for the death of 20-year-old Blake Zieto. Maltos-Chacon also had previous convictions for DUI and assault. Maltos-Chacon, who entered the country without inspection at an unknown place and unknown time, was ordered removed in October 2006. He is an ICE immigration fugitive in addition to being a criminal fugitive. [Emphasis added]

Alan Jacob Mogollon-Anaya, a Mexican national, charged April 2017 for aggravated vehicular homicide, DUI and aggravated assault following the crash that resulted in the death of Shirra Branum, 37, in Washington County, Tennessee. Mogollon-Anaya, who had two prior DUI convictions, entered the country without inspection at an unknown place in 2003. He was ordered removed in October 2017. He is an ICE immigration fugitive in addition to being a criminal fugitive. [Emphasis added]

Edwin Mejia, a Honduran national, charged in Omaha, Nebraska with motor vehicular homicide in the death of Sarah Root, 21 in January 2016. Mejia, who entered the country unlawfully as an unaccompanied minor in 2013, was ordered removed in April 2016. He is an ICE immigration fugitive and criminal fugitive. [Emphasis added]

Gonzalo Harrell-Gonzalez, a Mexican national, indicted by a Gilmer County, Georgia grand jury on charges of homicide by vehicle in the first degree, two counts of serious injury by vehicle, and reckless driving in the death of Dustin Inman, 16, in January 2001. He is wanted by ICE as an illegal alien in addition to being a criminal fugitive. [Emphasis added]

Luis Alberto Rodriguez-Castro, as Honduran national, charged in Kill Devil Hills, North Carolina in October 2011 with negligent homicide and vehicular manslaughter linked to the death of Joseph Storie, 51. Rodriguez-Castro, who entered the country without inspection at an unknown place in 1998, is wanted by ICE as an illegal alien in addition to being a criminal fugitive. [Emphasis added]

Michelle Root, the mother of 21-year-old Sarah Root who was allegedly killed by illegal alien Edwin Mejia in January 2016 on her graduation day, alerted Senators this week to the DHS’s erasing criminal illegal aliens from ICE’s Most Wanted list.

“The administration also removed the VOICE office’s most wanted list from their website — including my daughter’s killer, Edwin Mejia,” Root said before the Senate Judiciary Committee. “They want to abolish ICE and get rid of any law enforcement whose mission it is to carry out our immigration laws and protect the homeland.”

Searches for each of the criminal illegal aliens removed from ICE’s Most Wanted list result in a message that reads “Page Not Found,” indicating that the previous web pages for the fugitives have been wiped clean off the agency’s website. 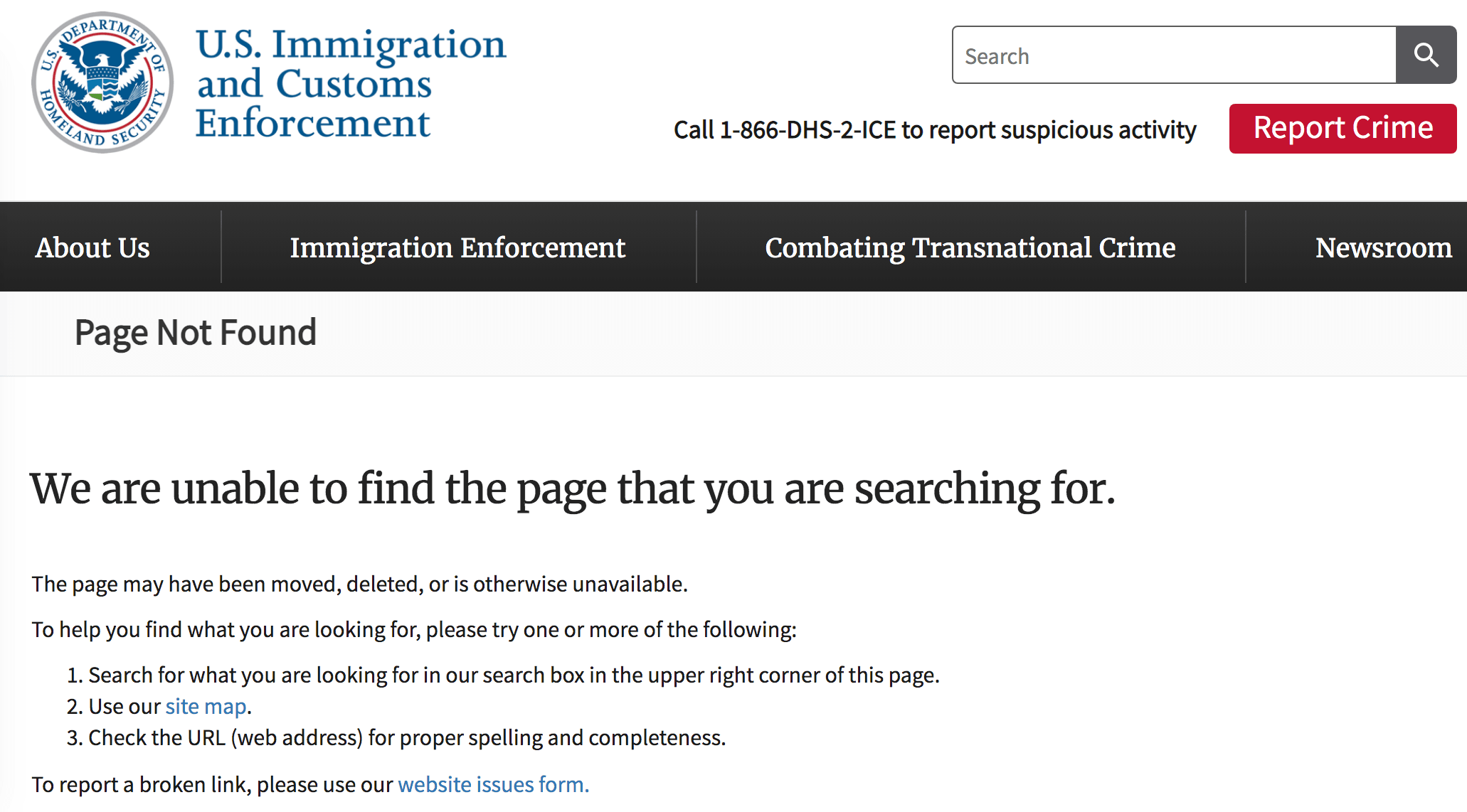 It is unclear if ICE has changed its metrics for how it identifies criminal illegal aliens as “Most Wanted” fugitives. ICE officials did not respond to a request for comment when contacted by Breitbart News.