Former President Donald Trump advised Senate Republicans on Monday to stop working with President Joe Biden on a nearly-trillion dollar infrastructure package, arguing they could get a better deal after the midterm elections.

“Republicans, don’t let the Radical Left play you for weak fools and losers!” Trump wrote in a statement sent to reporters.

Details of a final deal are expected Monday afternoon as negotiations continue.

Trump said Republicans were getting “absolutely savaged by Democrats” on the deal.

“Don’t do the infrastructure deal, wait until after we get proper election results in 2022 or otherwise, and regain a strong negotiating stance,” he said.

The former president blamed Senate Minority Leader Mitch McConnell (R-KY) and a “small group of RINOs” for trying to work with Biden, suggesting they were making a big mistake. 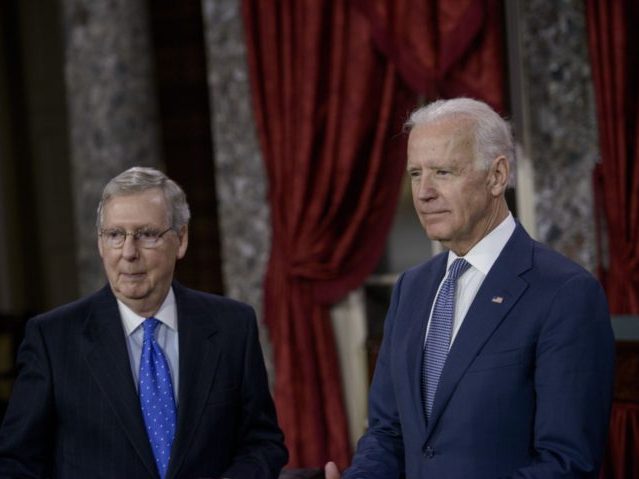 Trump voiced his opinion about the infrastructure bill as the Senate prepares to complete negotiations on the proposal and unveil legislative text.

President Joe Biden has placed special emphasis on making a deal happen, as he views a bipartisan proposal as a critical milestone for his presidency.

Republican senators who pride themselves as moderates such as Susan Collins (ME), Lisa Murkowski (AK), and Mitt Romney (UT) are using the package to hone their legacies as dealmakers.

Recently reelected Republican senators such as Lindsey Graham (SC) and Thom Tillis (NC) have also joined in talks, as they do not face immediate political consequences for working with Biden.

Other republican senators such as Jerry Moran of Kansas, Mike Rounds of South Dakota, and Todd Young of Indiana remain in politically safe Republican states, allowing them to negotiate with Biden.