Jordan, the ranking member of the Judiciary Committee and House Freedom Caucus cofounder, spoke to Breitbart News after the Centers for Disease Control and Prevention (CDC) announced that they will recommend Americans, even fully vaccinated people, should wear masks indoors again in places with high coronavirus infection rates.

This stands as a stark reversal of the CDC’s decision to lift the national mask mandates in May, in which Biden declared that his administration had made substantial progress on fighting the coronavirus pandemic.

Jordan told Breitbart News that this serves as the latest instance of Biden’s faltering administration seven months into his four-year term. The Ohio conservative explained that Dr. Anthony Fauci and the Biden administration have continually shifted their stance on if masks effectively guard against the coronavirus and if the federal government funded the Wuhan Institute of Virology.

Jordan explained, “Fauci initially said a year and a half ago when this thing started, he initially said, no need for a mask, and as then he said, wear one mask. And then he said, No, wear two masks, then it went back to one mask, and then it was back to no mask. Now, he’s saying wear a mask again. So you know so much for the old cliche, so much for trusting the science. … they can’t keep changing their story.” 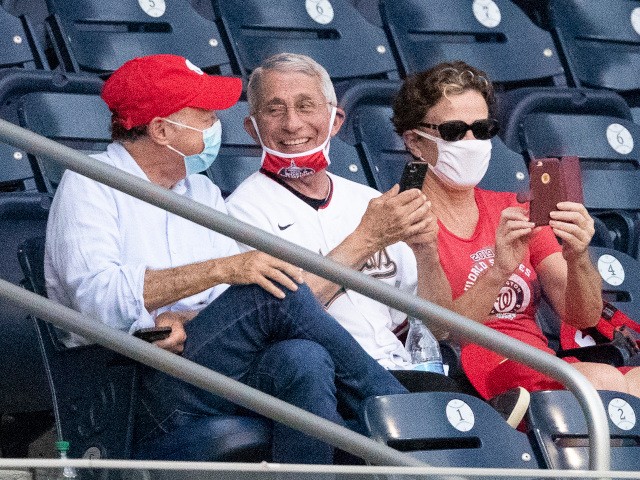 Dr. Anthony Fauci, director of the National Institute of Allergy and Infectious Diseases, center, smiles as he watches an opening day baseball game between the Washington Nationals and the New York Yankees at Nationals Park, Thursday, July 23, 2020, in Washington. (AP Photo/Alex Brandon)

He continued, “Think about this, Fauci changed his opinion [a lot]; I got five statements from Fauci on the origins, that we never funded the Wuhan instead of Virology. And he said, ‘oh, yeah, we funded it. But, it was a sub-grant through, you know, EcoHealth.’ Then he said, ‘no, we funded it. But, we didn’t do gain of function research there.’ And then this weekend, he said, ‘Well, we funded it, there was a gain of function research, but it was a sound scientific decision.’ And finally, he said, ‘it would have been negligent not to fund the lab in China.’ So he went from we never funded it to it’d be negligent. So this is Fauci and the Biden administration just all over the place. And it shouldn’t surprise us.”

Jordan said the Biden mask surrender serves as the latest crisis during the Biden administration, including a crime wave across the country, a porous border with endless migrants crossing into the United States, and rising inflation.

“And, frankly, Republicans lots of independents, see this relentless attack on President Trump. So I think his numbers are gonna continue to go down; it’s just the nature of being having a bad start to your presidency,” Jordan added.