Sen. Kyrsten Sinema (D-AZ) threw a wrench into Democrats’ plan to slip amnesty for millions of illegal aliens into a federal spending package that would bypass a filibuster and only need a simple majority in the United States Senate.

On Wednesday, Sinema announced that she opposes a $3.5 trillion budget — which includes an amnesty for millions of illegal aliens — and thus the Senate Democrats do not have the 50 votes necessary to pass the spending package. 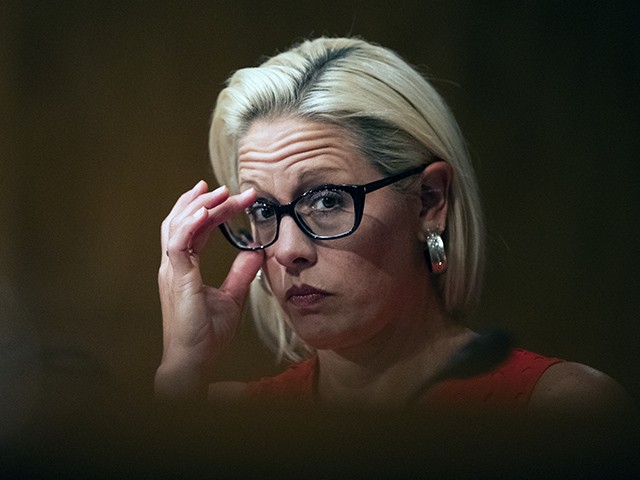 Democrats, for months, had hoped to slip the amnesty past Congress without facing opposition from Senate Republicans by using the little-known reconciliation process whereby legislation can be approved with only majority support, bypassing a filibuster, if the Senate Parliamentarian decides the legislation is mostly spending related.

The amnesty via reconciliation would give green cards to illegal aliens enrolled and eligible for the Deferred Action for Childhood Arrivals (DACA) program, those who work on farms, those provided Temporary Protected Status (TPS), and those Congress considers “essential” — a population well into the millions.

A number of House Democrats, including Reps. Lou Correa (D-CA), Jesús García (D-IL), Lucille Roybal-Allard (D-CA), and Jamaal Bowman (D-NY), have said they will not vote for any spending package on infrastructure that does not include amnesty.

For Arizona, specifically, the amnesty would be detrimental as current analysis projects that 1.7 million illegal aliens will have reached the U.S.-Mexico border by the end of the year, many arriving and released into Arizona communities.

Senate Democrats had banked on swaying the party’s moderate wing after Sen. Joe Manchin (D-WV) voiced support for including amnesty in the budget via reconciliation.

“Prioritizing the interests of workers over corporations demanding cheap labor means opposing amnesty in the budget deal,” the legislators wrote in a letter to Manchin, led by Delegate Riley Keaton (R).

Sinema’s opposition to the Democrats’ amnesty-filled budget is a rebuke of donor class interests in driving the price of U.S. labor down. The amnesty, for example, has major backing from Facebook CEO Mark Zuckerberg’s FWD.us, former President George W. Bush, and the Koch brothers.

Likewise, the U.S. Chamber of Commerce had most recently held a conference dedicated to promoting the amnesty plan, claiming that legalizing millions of foreign competitors against American workers is “vital” to the U.S. economic recovery following the Chinese coronavirus crisis.