The White House called a lid on Monday morning at 11:27 a.m. as President Joe Biden spent a long four day weekend at his home in Delaware.

The president left Friday afternoon for his trip home, remaining there for the rest of the weekend where he played golf. 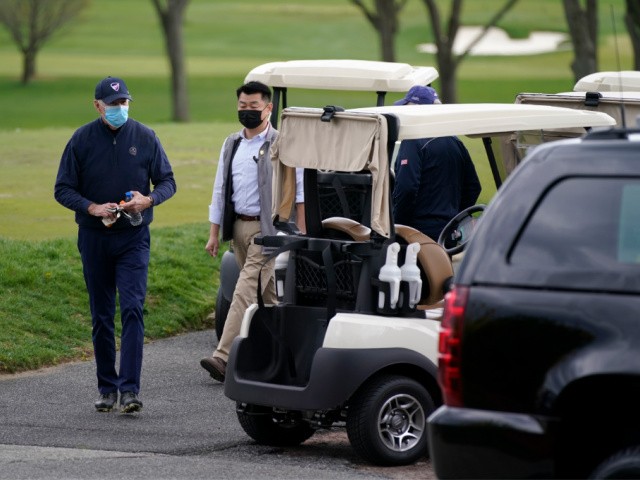 President Joe Biden walks to a motorcade vehicle after golfing at Wilmington Country Club, Saturday, April 17, 2021, in Wilmington, Del. Biden is spending the weekend at his home in Delaware. (AP Photo/Patrick Semansky)

On Monday, he did not return to the White House, even as his proposed bipartisan infrastructure bill moved forward in the Senate. The bill is expected to pass early Tuesday morning.

The White House on Friday indicated Biden could return to Washington, D.C., earlier in the week.

“We expect him to be here early days next week,” White House press secretary Jen Psaki said during the daily press briefing.

She hinted reporters should not be critical of the president’s time away from the White House, but declined to describe it as a vacation.

“Well, every president is always working, no matter where they are. Right?” she asked. “That’s always how it works.”

Biden owns two homes in Delaware including one in Rehoboth Beach he purchased for $2.74 million in 2017.

“Even as he goes to Delaware or Camp David, he will of course still be working,” Psaki added.

Former President Donald Trump stayed at his club in Bedminster, New Jersey, in August, but had regular meetings and spoke several times to the press.