Rep. Claudia Tenney (R-NY), an outspoken voice in Congress for Iranians fighting for freedom from the repressive Islamic republic, sought to assure Iranian Americans that congressional Republicans would continue to fight for oppressed Iranians in light of the Biden administration’s “mismanaged” withdrawal from Afghanistan last week and its far-reaching “chilling effect” which demonstrated the current administration is not “up to this challenge.”

In a statement to Breitbart News on Sunday, the congresswoman began by slamming President Joe Biden’s chaotic withdrawal from Afghanistan which saw the country’s rapid reconquest by the Taliban.

“President Biden completely mismanaged our withdrawal from Afghanistan and it is having a chilling effect across the region,” she said.

“Allies and partners around the world, from Europe to the Middle East, are now questioning America’s resolve to fight terrorism and stand up to Islamic extremism,” she added. 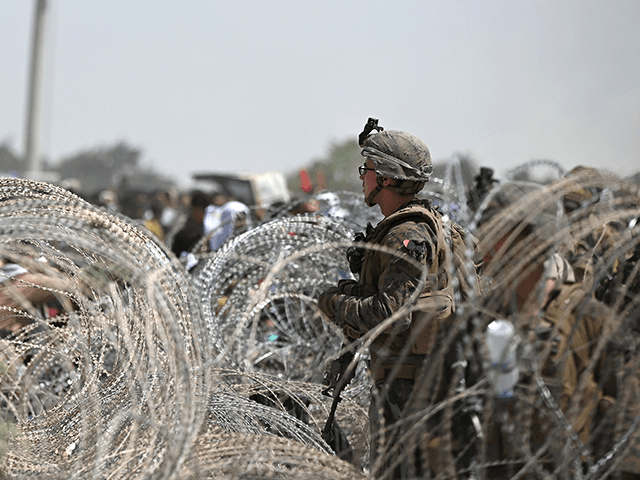 A US soldier stands on guard as Afghans gather on a roadside near the military part of the airport in Kabul on August 20, 2021, hoping to flee from the country after the Taliban’s military takeover of Afghanistan. (Photo by Wakil KOHSAR / AFP) (Photo by WAKIL KOHSAR/AFP via Getty Images)

Calling on Congress to “fill the void” left as a result of the “mismanaged” evacuation, Tenney placed the responsibility upon the U.S. to ensure the safety of the region and specifically the U.S. citizens currently trapped there.

“It is imperative that Congress fills the void Biden so recklessly left in Afghanistan,” she said. “We must ensure every American citizen is evacuated and our counter-terrorism mission continues.”

Addressing concerns of Iranian Americans of the impact on the U.S.’s efforts to hold Iran accountable for its oppressive practices, Tenney noted that although Biden “does not inspire much confidence” after having erred in “almost every major foreign policy decision of his career,” the GOP would continue to support the Iranian people.

“I want to assure Iranians that while the Biden Administration may not be up to this challenge, Republicans in Congress are very much in the fight,” she said.

The congresswoman concluded by advocating a campaign of “maximum pressure” on the Islamist regime.

“The best way forward for the region and our national security interests is to continue the maximum pressure campaign until the Iranian regime agrees to a comprehensive deal,” she said. “This is what I am continuing to fight for in Congress.”

Last week, Tenney received a letter of gratitude from Iranian Americans for Liberty (IAL) — a bipartisan community of Iranian Americans working to aid those living under the oppressive Iranian regime — signed by over a thousand Iranian Americans, thanking her for voicing her “strong support of the Iranian people during the ongoing Iran Protests.”

In response, she expressed feeling “honored” in her campaign against the Islamic regime and in support of its “tormented” citizens.

I'm honored to stand with Iranian Americans and Iranians around the world in demanding an end to the brutal regime in Tehran. For 42 years, the regime has tormented its people and terrorized the world.

“I’m honored to stand with Iranian Americans and Iranians around the world in demanding an end to the brutal regime in Tehran,” she wrote. “For 42 years, the regime has tormented its people and terrorized the world.”

“Enough is enough,” she added.

On Saturday, she called on President Biden to resign following his major foreign policy failure in Afghanistan as thousands of Americans remain stranded, blasting his “arrogant callousness” and false assertions that Americans are able to access the airport in Kabul as the condition in the area under Taliban rule worsens.

“As we watch the poorly planned exit of U.S. forces in Afghanistan unfold, it’s worth pointing out that the two countries that stand to benefit the most from this chaos are Iran and China,” he said. “Iran’s outgoing foreign minister is already using the images of Afghans clinging to U.S. military planes to say that America is weak and not fit for leadership.”

.@kshahrooz I have consistently used my voice through op-eds, social media, TV & radio to call for the American people to support the people of Iran & for U.S. politicians to condemn the Iranian Regime. @LibertyIranian has done the same as well. Shame on you. https://t.co/KWrs70XKBH

“I join with Rep. Tenney and scores of congressional leaders in calling for President Biden & his administration to be held accountable for this debacle,” he concluded.

Last week, the theocratic regime accelerated its enrichment of uranium to near weapons-grade, according to a U.N. atomic watchdog report from Tuesday, leading to heightened concerns as both sides seek to revive the nuclear deal.