MSNBC intelligence analyst Malcolm Nance reacted to suicide bombings outside of Kabul’s international airport on Thursday – which killed at least 11 U.S. Marines and one Navy medic – by telling Americans to “deal with it.”

Nance made the declaration in a hashtag to his nearly 1 million followers on Twitter.

“20 YEARS- FYI there have been terrorist suicide bombers killing civilians nearly DAILY in Afghanistan. This ain’t new. It’s why we are leaving. #DealWithIt,” Nance tweeted.

20 YEARS- FYI there have been terrorist suicide bombers killing civilians nearly DAILY in Afghanistan. This ain’t new. It’s why we are leaving. #DealWithIt 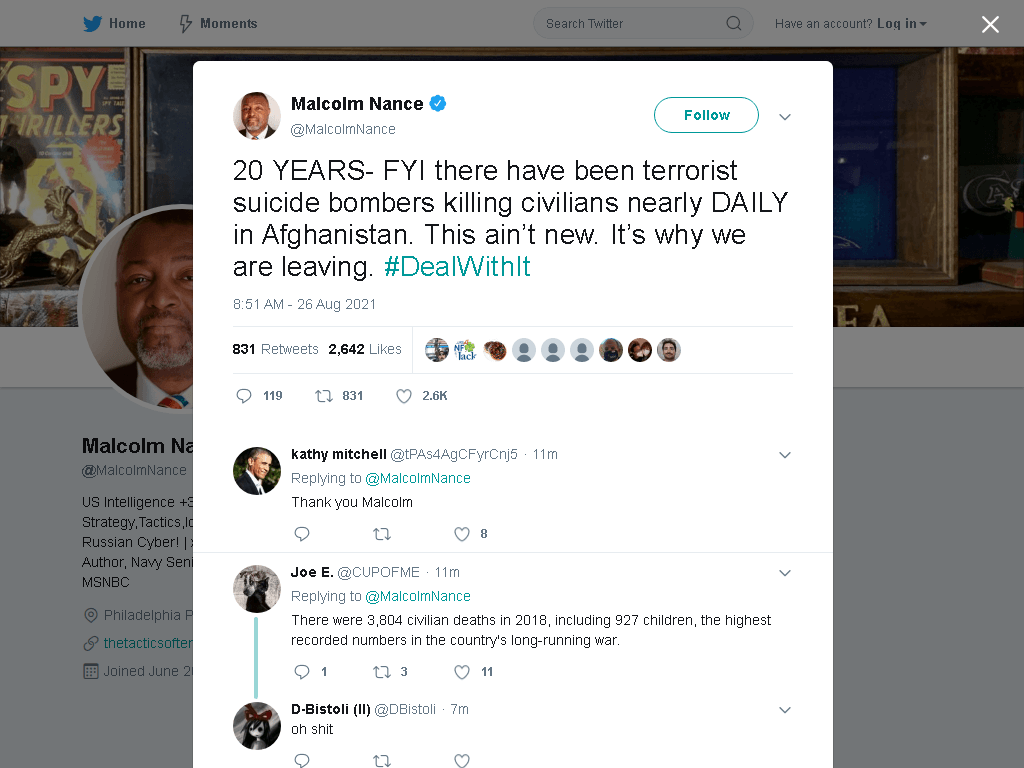 In addition to the U.S. service members killed, the twin suicide bombings outside Hamid Karzai International Airport and the Baron Hotel in Kabul, Afghanistan, killed at least 60 people and wounded another 150 on Thursday, according to reports. 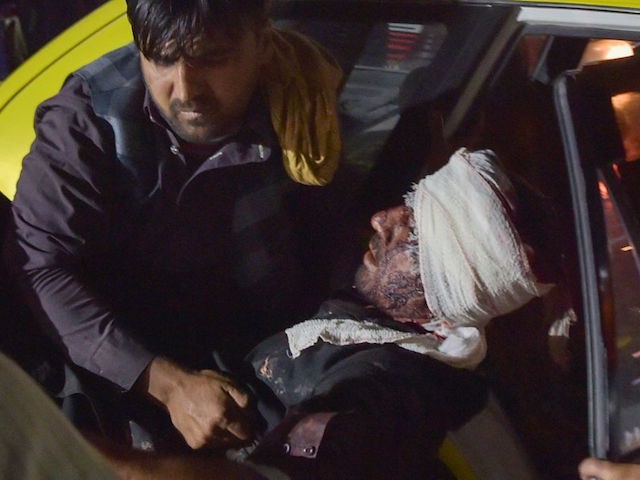 Medical and hospital staff carry an injured man out of a car for treatment after two blasts, which killed at least five and wounded a dozen, outside the airport in Kabul on August 26, 2021. (WAKIL KOHSAR/AFP via Getty Images).

The White House canceled its noon briefing with press secretary Jen Psaki, which would have presumably offered a more concrete update on the status of American citizens left in Afghanistan.

Nance’s description of the mass killing as not “news” prompted a torrent of outrage on the social media outlet.

U.S. Marines are among the wounded you despicable sack of shit. https://t.co/8C13Ss526K

"Terrorism is just a daily part of life. you get used to it," said the man who brags about his three decades in terror intelligence.

Imagine Tweeting this on a day when at least 12 American soldiers died in a terrorist attack. https://t.co/Wv9vk1Tqzm

There were a million different ways you could have made your point, and yet you chose the one that makes you an asshole.

It takes a lot to possibly have one of the worst takes on Twitter.

Tweeting the hashtag “deal with it” in the wake of a deadly terrorist attack that killed at least a dozen U.S. service members is not Nance’s first time disparaging his fellow countrymen and downplaying terrorism.

Nance routinely promulgated the Trump-Russia collusion conspiracy theory on MSNBC and claimed, without evidence, that President Trump was an “asset” of the Russian government – likely adding to the hysteria and confusion experienced by consumers of the establishment press during the Trump administration.

In 2019, the Department of Justice announced that special counsel Robert Mueller’s investigation found no evidence of collusion between any American and the Russian government in attempting to interfere with the 2016 presidential election.