“It was a surprise for us how the former administration abandoned the government,” Taliban’s deputy information and culture minister Zabihullah Mujahid told the New York Times. “We were not fully prepared for that and are still trying to figure things out to manage the crisis and try to help people in any way possible.”

In response, the UNICEF agreed with Mujahid, indicating almost 10 million children will depend on foreign aid to live, as World Food Program revealed 40 percent of Afghan crops have been lost since Biden’s deadly withdrawal. And commodity prices are climbing. “Wheat has gone up by 25 percent, and the aid agency’s own food stock is expected to run out by the end of September,” the Times reports.

“Nearly 10 million girls and boys depend on humanitarian assistance just to survive,” Executive Director of UNICEF Henrietta H. Foresaid said at the U.N. conference in Geneva. “At least one million children will suffer from severe acute malnutrition this year and could die without treatment.”

There has never been a more urgent time to stand with the children of Afghanistan and the people who serve them.

Without your support, essential services will come to a grinding halt and the country will slip further into chaos.

The suffering from Biden’s rapid withdrawal has the attention of the world. Secretary-General of the United Nations António Guterres told the media Monday the U.N. has secured over $1 billion in aid pledges from various countries with Biden pledging $64 million “in new funding for food and medical aid.”

But the United States and the world will reportedly rely on the Taliban terrorists, who have violently hunted down opposition, whipped protesting women, and lashed journalists, for distribution of aid to the impoverished, U.N.’s Director of humanitarian and emergency relief operations Martin Griffiths said upon having visited Kabul last week.

Taliban reportedly told Griffiths that they “will remove previous and current impediments in front of your assistance and all related projects working under supervision of U.N and other international organizations in Afghanistan.” 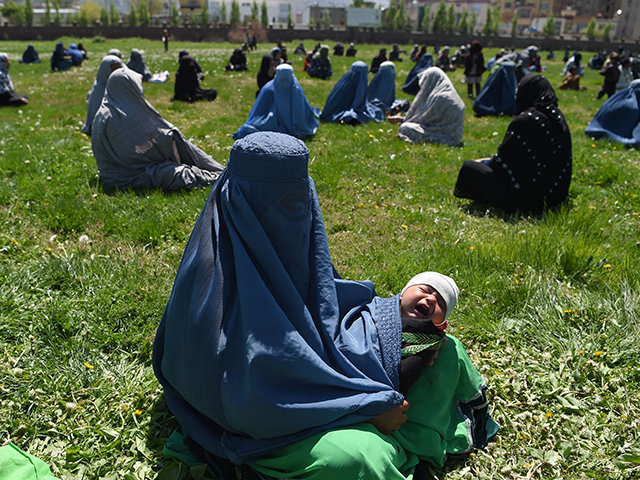 A woman wearing a burqa holds her child as she waits to receive free wheat from the government emergency committee during a government-imposed lockdown on the capital city as a preventive measure against the COVID-19 coronavirus, in Kabul on April 21, 2020. (Photo by WAKIL KOHSAR/AFP via Getty Images)

The Taliban promises come at a time when the World Bank has halted all funding for new projects. Likewise, the International Monetary Fund has blocked funds designated for Afghanistan while Biden has also “frozen the assets of Afghanistan’s central bank that are held in the United States.” China, meanwhile, has guaranteed $30 million to assist the Taliban’s government.

Here’s how Beijing’s closer ties with the Taliban start. Xinhua: “China has decided to urgently provide 200 million yuan ($30.96 million) worth of grains, winter supplies, vaccines, and medicines to Afghanistan according to the needs of the Afghan people.”https://t.co/zh1l4lKMrN

Biden’s deadly withdrawal, which left Afghans destitute amid the rapid Taliban takeover of the country, has also stranded Americans in the country behind Taliban lines. It is unknown how many Americans remain in the country. Reports range from 100 to 5,000.

The hurried evacuation not only left Americans hostage in Afghanistan but also billions of dollars worth of equipment to the Taliban to use for propaganda. Videos since the collapse of the country have shown the Taliban parading around with U.S. military gear, waving Taliban flag above U.S. military vehicles as they hummed through the streets.