The woman was one of the hundreds of Americans stranded in the country after President Joe Biden withdrew U.S. troops on the Taliban-approved timeline.

“Weeks of work and countless hours of coordination paid off,” Issa said in a statement. “Nasria is finally coming home.”

According to the congressman’s office:

Nasria is a 25-year-old pregnant American citizen from Southern California who has been stranded in Kabul since it fell to the Taliban. After her friends contacted Rep. Issa’s office, the congressman and his team immediately established communication channels with Nasria and began coordinating her safe return. Nasria leaves behind the father of her child, however, after they married in Afghanistan.

Issa affirmed his team is working “around the clock to ensure hundreds of American citizens stranded in Afghanistan are able to escape”:

“Nothing ends until our community is once again reunited with loved ones,” he added.

On Monday, U.S. Secretary of State Antony Blinken (D) said there are “about 100 Americans in Afghanistan” following Biden’s botched departure from Afghanistan on August 31: 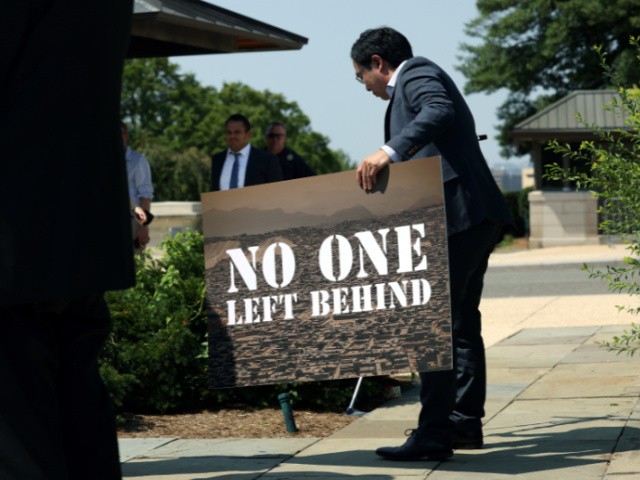 Rep. Andy Kim (D-NY) picks up a sign at a bipartisan news conference on the ongoing Afghanistan evacuations, at the U.S. Capitol on August 25, 2021, in Washington, DC (Kevin Dietsch/Getty Images).

“As of the end of last week, we had about 100 American citizens in Afghanistan who had told us they wish to leave the country,” Blinken said. “I want to emphasize that this is a snapshot in time.”

He later added, “At any given moment in time exactly how many American citizens are in any country, ah, is something we can’t and don’t know. Americans are not required to register when they go to a foreign country or if they reside there.”