In his essay, Dr. Donohue compares Pelosi’s “views” about abortion to those whose “views” about slavery differ from those of the Church.

A pro-choice slaveowner would not insist that others own slaves but would assert their right to do so if they please, as Pelosi does in the case of abortion, Donohue suggests.

Donohue underscores the difference in language between Pelosi and Catholic leaders, who speak “declaratively,” rather than offer opinion or views.

“The pope recently said that abortion is ‘murder,’ and Archbishop Cordileone called it ‘child murder,’” Donohue observes. “Neither argued that it was his ‘view.’ Indeed, the pope said that ‘any book on embryology’ makes clear that life begins at conception.” 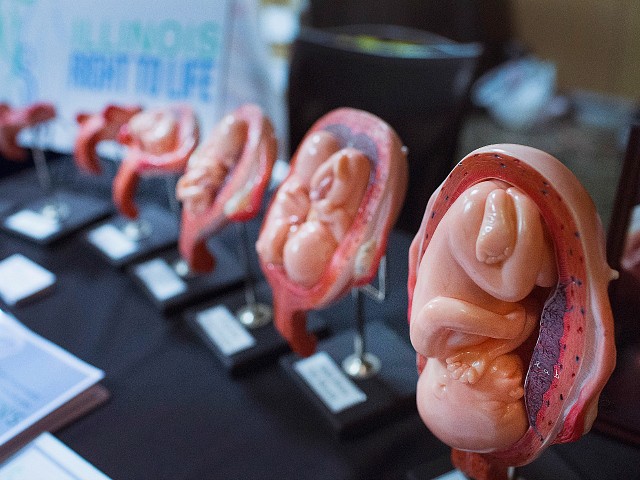 Stages of a fetus are displayed at the Illinois Right to Life table (Scott Olson/Getty Images).

“Those who oppose slavery and abortion rest their case on moral absolutes, not opinion,” Donohue declares. “Pelosi’s moral relativism places her outside the Catholic community.”

Donohue’s analysis echoed that of Catholic intellectual George Weigel, who argued in a September 22 essay that the Church’s perennial opposition to abortion rests not on “belief” but on biological fact and moral truth.

The only way to correctly say that Catholics believe human life begins at conception is in the same sense that Catholics “believe” the earth is spherical, not flat, and that a water molecule is “composed of two hydrogen atoms and one oxygen atom,” Weigel observed.

That is not “a matter of faith or ‘belief,’” Weigel insisted. “It’s an empirical fact: a human life, and nothing other than a human life, begins at conception.”

“Big Abortion, its cultural allies, and its political water-carriers have muddied these linguistic waters for decades, arguing that the ‘Catholic belief’ that life begins at conception is a sectarian claim with no scientific foundation,” he declared, which is a lie that should be called out as such.