The Women’s March organization has informed protesters joining its Washington, DC, “Rally for Abortion Justice” Saturday not to bring “coat-hanger imagery” or wear Handmaid’s Tale costumes for fear of the narratives now attached to these items.

Coat-hangers have long been a traditional pro-abortion prop used to inspire fear that, without unlimited access to abortion, women will resort to home abortions using coat hangers.

Now that the abortion industry is promoting “at-home” abortions via drugs, the Women’s March has decided differently.

In the section of its website titled “What should I not bring…” the organization states:

Coat-hanger imagery: – We do not want to accidentally reinforce the right wing talking points that self-managed abortions are dangerous, scary and harmful. 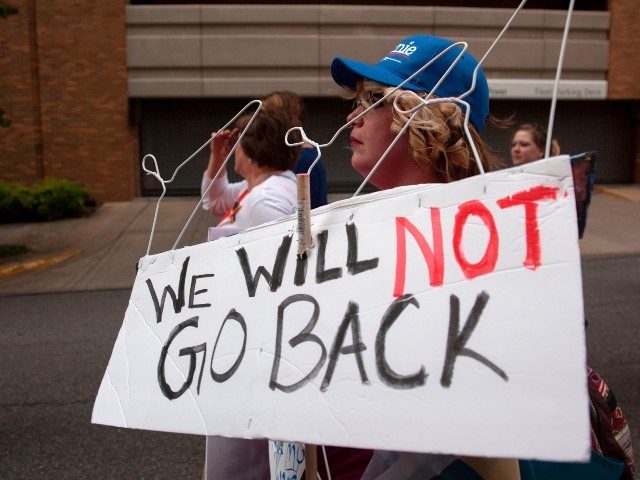 Pro-Choice protesters with metal hangers on a sign march through the streets of Birmingham, Alabama, during the March For Reproductive Freedom on May 19, 2019. – The state of Alabama passed a near-total abortian ban on May 14, 2019, one of the nation’s most restrictive bans on abortions in decades. (SETH HERALD/AFP via Getty Images)

Catholic League President Bill Donohue wrote Thursday about the ban on coat hangers with the blame placed on the pro-life community:

According to the organizers of this year’s Women’s March on Washington, there is nothing dangerous, scary or harmful about a pregnant woman inserting a wire hanger into her vagina to kill her child. That’s why those who show up with a hanger, or hanger imagery, will get booted, even if their purpose is to protest abortion-law restrictions.

“Liberals, they suggest, are fine with women using a hanger to abort their child,” Donohue observed. “It’s a safe instrument.”

“Now coat hangers are in vogue—only right wing loons object to pregnant woman using them to murder their child,” he wrote regarding the Women’s March message.

The abortion industry and its political allies have invested greatly in at-home, drug-induced abortions.

In April, the Biden Food and Drug Administration (FDA) announced the agency would be lifting restrictions on the health and safety standards applied to abortion-inducing drugs, allowing for the dispensation of the drugs via telemedicine and through the mail.

Mifepristone is safe, effective, and has been used by 4+ million people since the FDA approved it more than 20 years ago. Removing medically unnecessary barriers to it is a big win for abortion access & keeps patients, providers, and health center staff safer during the pandemic. https://t.co/ygDB6rxRpw

Planned Parenthood, which profits from abortions, celebrated by posting to Twitter that mifepristone, the first drug taken during a chemical abortion, is “safe” and “effective.”

Planned Parenthood CEO Alexis McGill Johnson boasted in April 2020 about the launch of her organization’s new tele-abortion service, in which women seeking an abortion have a virtual meeting with a provider and obtain a prescription for abortion-inducing drugs they take at home.

“It is actually a silver lining in this pandemic, that Planned Parenthood and many other health providers have actually been able to really lean into telehealth infrastructure and provide service,” Johnson said.

While Planned Parenthood has been touting an increase in at-home abortions since its tele-abortion services began nationwide, many pro-life advocates have concerns about the practice. 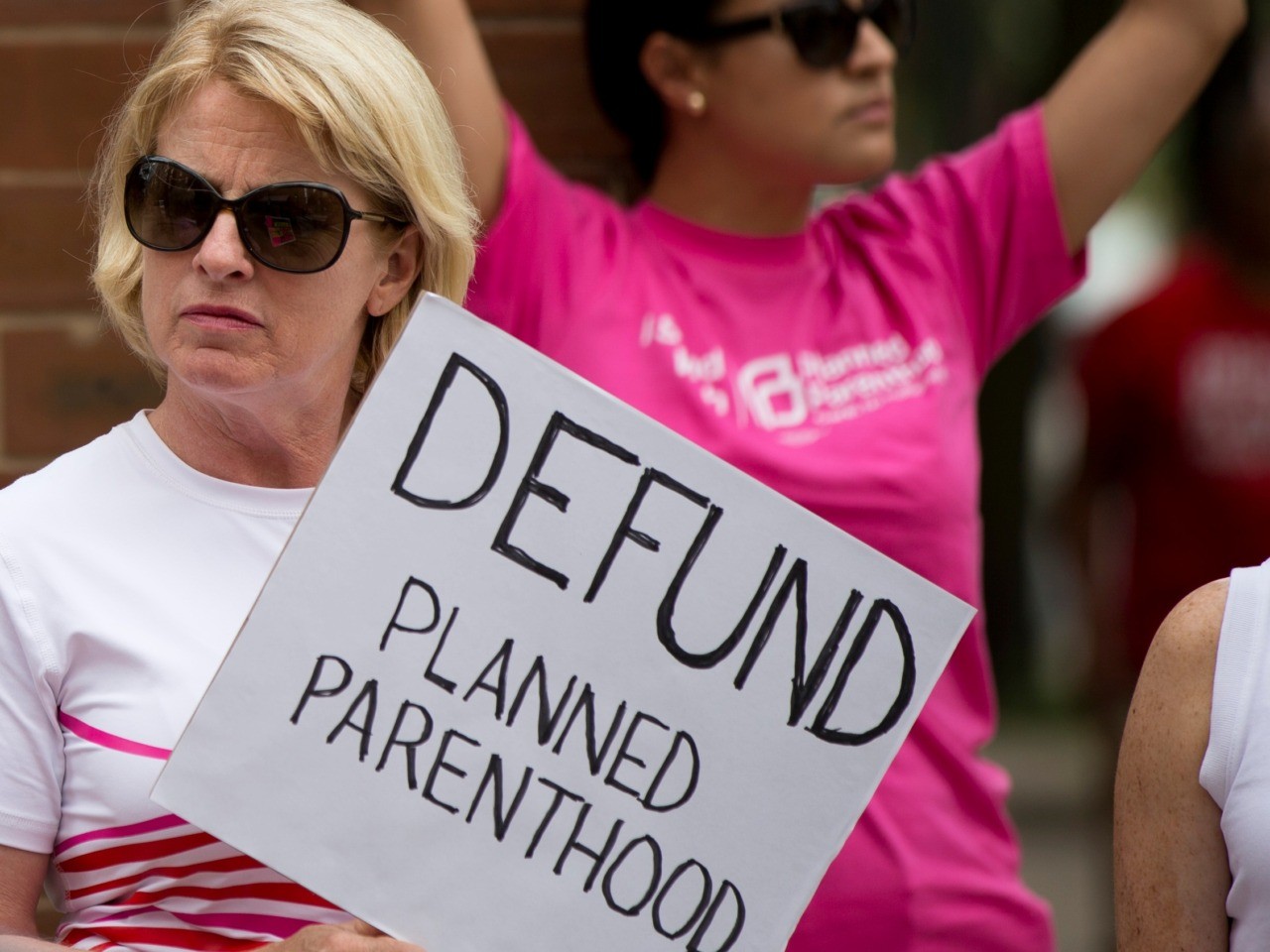 An opponent and supporter of Planned Parenthood demonstrate Tuesday, July 28, 2015, in Philadelphia. Anti-abortion activists are calling for an end to government funding for the nonprofit reproductive services organization. (AP Photo/Matt Rourke)

Dr. Christina Francis, an Indiana-based OB/GYN and chairman of the board of the American Association of Pro-Life Obstetricians and Gynecologists (AAPLOG), told EWTN Pro-Life Weekly last year mifepristone “is a medication that definitely has dangers associated with it.”

Francis said some immediate complications of mifepristone could be:

… hemorrhage, the immediate possibility of infection, and the possibility of failure, where the pregnancy doesn’t fully pass from the medication and then leading to sometimes the requirement for emergent surgery for that woman because of either ongoing bleeding or the risk of infection.

Francis added that because of the uncertainties associated with the pandemic at the time, many women were “being influenced by fear … and this is being perpetuated by the abortion industry.”

Dr. Meera Shah, chief medical officer of Planned Parenthood Hudson Peconic, touted to the Associated Press (AP) in April 2020 that her organization’s new telemedicine abortion service was so much in demand that one mother began her drug-induced abortion “at home with her children running around behind her.”

Former abortionist Dr. Anthony Levatino explained in his videos about various abortion procedures that mifepristone blocks the action of progesterone, which the mother’s body produces to nourish the pregnancy. When progesterone is blocked, the lining of the mother’s uterus deteriorates, and blood and nourishment are cut off to the developing baby, who then dies inside the mother’s womb:

The drug misoprostol (also called Cytotec) then causes contractions and bleeding to expel the baby from the mother’s uterus.

This series of events occur at home when the drugs are sent via mail.

AP reported in April of this year that about 40 percent of all abortions in the country are drug-induced.

We won’t let lawmakers or the Supreme Court take away our reproductive freedoms. Find a march near you: https://t.co/iT1ZFbtaU1 pic.twitter.com/QIU4YKfouj

The Women’s March has also axed “Handmaid’s Tale themed” costumes from the rally, apparently because such imagery is now considered racist.

The use of Handmaid’s Tale imagery to characterize the controlling of women’s reproduction has proliferated, primarily by white women across the country, since the show has gained popularity. This message continues to create more fragmentation, often around race and class, because it erases the fact that Black women, undocumented women, incarcerated women, poor women and disabled women have always had their reproduction freedom controlled in this country. This is not a dystopian past or future.

The call to action is clear, and it’s urgent. Our right to legal abortion is on the line. Join us on Oct 2, along with over 150 other organizations, as we show the Supreme Court that we won’t back down. Not now, not ever. https://t.co/6FaaUKjDZQ #RallyForAbortionAccess pic.twitter.com/yXxj7xmXUZ

The Women’s March is being held to protest the Texas Heartbeat Act, which prohibits abortions once a fetal heartbeat is detected.

“When the Supreme Court rejected an emergency request to block Texas’s abortion ban, they effectively took the next step towards overturning Roe v. Wade,” the Women’s March says. “Simply put: We are witnessing the most dire threat to abortion access in our lifetime.”