Whitmer claimed during the dinner that a “coordinated attack on voting rights” exists that “is designed to systematically disenfranchise black voters, communities of colors, older voters, college kids,” per local outlet Fox 2’s video of the event.

The four bills passed the state’s Republican-controlled House and Senate with substantial support from House Democrats and support from one Senate Democrat. The two bills with the most Democrat support received yes votes from roughly half of the 52-member House Democrat caucus.

Whitmer stated in her veto letter, “Enrolled House Bills 4837, 4838, and 4492 attempt to suppress the vote or perpetuate the ‘Big Lie’: the calculated disinformation campaign to discredit the 2020 election. I will have no part in any effort that grants an ounce of credence to this deception, so injurious to our democracy.” 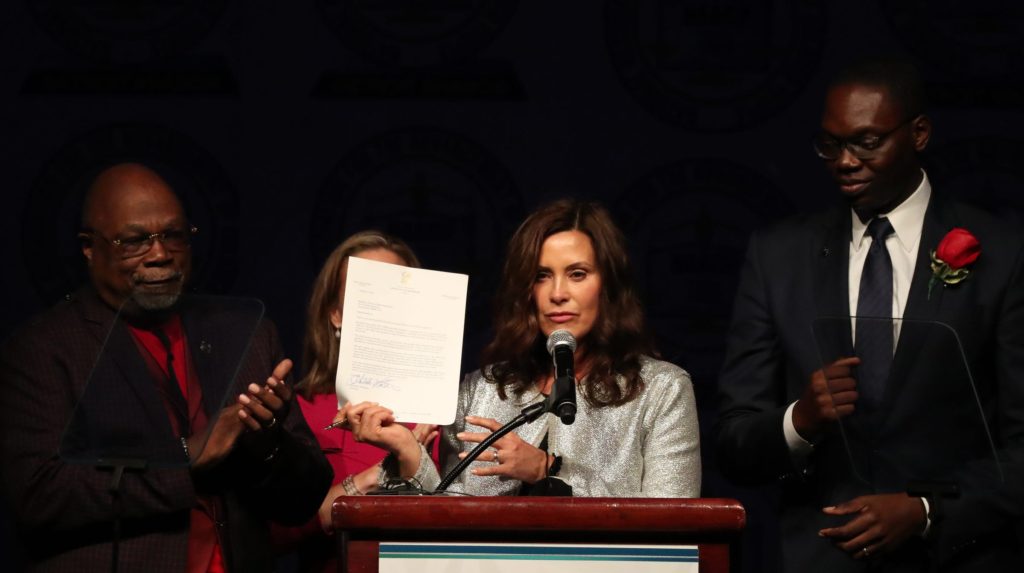 H.B. 4837, would have limited access to “qualified voter files” to select in-state entities, but Whitmer argued “outside parties” had no access to them to begin with. H.B. 4838 would have prohibited electronic voting systems from being connected to the internet from the time polls open to the time the results are counted, a practice that is already in place but that supporters of the bill sought to codify into law. H.B. 4492 would have both expanded what types of buildings could be designated as polling places as well as modified the requirements the buildings would have to meet to serve as polling places.

The fourth bill Whitmer vetoed, H.B. 4528, would have required the secretary of state to establish a “comprehensive training” for each local entity seeking to designate individuals as “election challengers” in their jurisdictions.

Whitmer conceded that the fourth bill “is worth further consideration” but that “it must have the necessary funding to accomplish its purpose.”

State Rep. Sarah Lightner (R), who sponsored one of the bills, told Bridge Michigan, “I’m not sure how expanding polling locations, and ensuring poll workers and challengers are well trained limits access to voters.”

Michigan, a key battleground state that President Joe Biden won in 2020 by less than three points, was one of a handful of states that came under intense scrutiny following the election because of Republicans’ concerns about voter fraud. The Bureau of Elections, led by Secretary of State Jocelyn Benson (D), conducted 250 post-election audits — the most in state history — and determined the election results were accurate.

State Rep. David LaGrand, one of the many Democrats who voted in favor of the bills, said, according to MLive, that “he doesn’t want to talk past or minimize the concerns of his Republican colleagues.” LaGrand said that although people should be “careful” when discussing the topic of voter fraud, “it is also true that we are in a real place where 40% of the country has deep concerns about election integrity.”

While Whitmer has vowed to veto other election reforms currently in the state’s legislative pipeline, a GOP-backed group called Secure MI Vote is petitioning to sidestep Whitmer’s veto powers. The petition would allow the state legislature to pass veto-proof election reforms should the petition receive the approximately 340,000 signatures it needs.