Fifty percent of respondents said they disapproved when asked if they approve or disapprove of how Biden is handling his job as president; 12 percent said they were unsure of how they felt.

A Quinnipiac University poll released on Tuesday also showed only 37 percent of Americans approve of Biden’s job performance, with a higher percentage — 52 percent — than the Grinnell College poll disapproving.

Biden’s worsening poll numbers come as the president has had a rocky nine months in office, including a botched Afghanistan withdrawal, which has seen backlash from Republicans in Congress after the death of 13 U.S servicemembers and hundreds of U.S. citizens, Afghan allies, and vulnerable Afghans were left in the county controlled by Taliban terrorists. 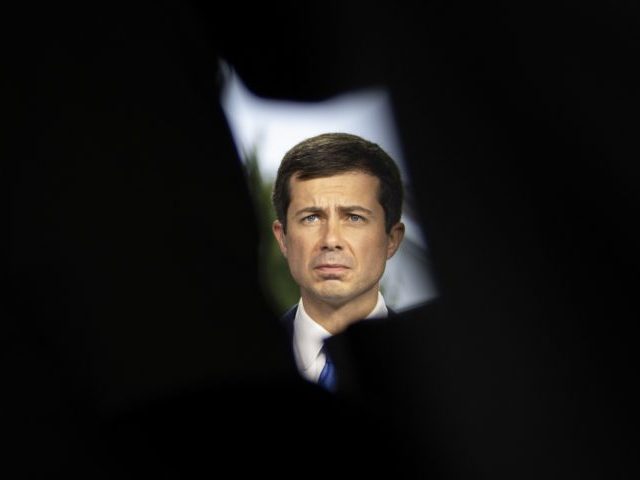 WASHINGTON, DC – OCTOBER 13: U.S. Transportation Secretary Pete Buttigieg does a television interview with CNBC outside the White House October 13, 2021 in Washington, DC. With the holiday season approaching, President Biden is expected to announce that the Port of Los Angeles will begin to operate 24 hours a day in efforts to relieve the backlog in the supply chain that delivers goods to the United States. Americans have seen delays in a host of consumer goods, including electronics, cars, lumber, toys and more. (Photo by Drew Angerer/Getty Images)

The president is currently in the middle of a months-long supply chain crisis. However, Biden’s U.S. Transportation Secretary Pete Buttigieg has been MIA for nearly two months, as it was recently uncovered that he was on paid leave with his husband, Chasten, and their two newborn babies.

The Grinnell College national poll was conducted for Grinnell College by Selzer & Co in Iowa between October 13 and 17, where 915 U.S. adults ages 18 and over were interviewed. The poll has a margin of error of plus or minus 3.2 percentage points.

The question regarding 2024 was based on a smaller selection of 745 people, with a margin of error of plus or minus 3.6 percentage points.