President Joe Biden and congressional Democrats plan to hold dual votes on the so-called bipartisan infrastructure bill and the Build Back Better Act next week.

The White House has pressured Democrat leadership to hold votes on the so-called bipartisan infrastructure bill, the Infrastructure Investment and Jobs Act, the infrastructure reconciliation act, or the Build Back Better Act.

Biden has pinned his legislative agenda on passing these two infrastructure bills, which represents trillions of dollars in social welfare spending and climate change programs. The 46th president hopes to take these wins while remaining unable to pass any significant legislation since the $1.9 trillion American Rescue Plan, the Democrats’ coronavirus relief bill. 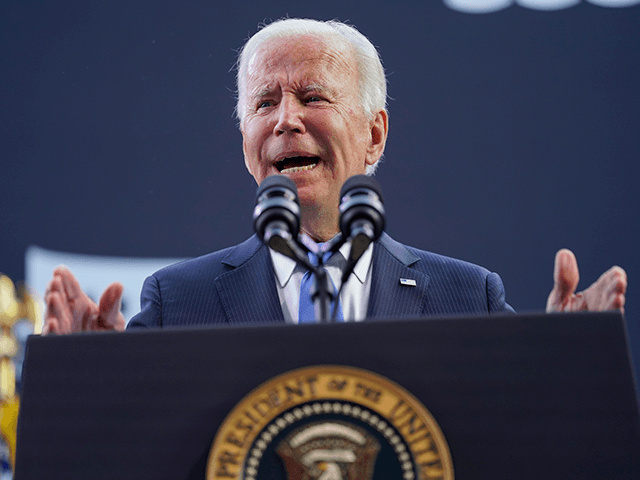 In this October 15, 2021, file photo, President Joe Biden speaks at the dedication of the Dodd Center for Human Rights at the University of Connecticut in Storrs, Connecticut. (AP Photo/Evan Vucci)

Democrats face a looming deadline to pass the infrastructure bill before October 31, which is the deadline for the highway funding bill.

Senate Majority Leader Chuck Schumer (D-NY) and House Speaker Nancy Pelosi (D-CA) will hash out the details of this strategy likely into the weekend as they hope to cobble together the votes for their razor-thin majorities in each chamber of Congress. Pelosi can only afford to lose roughly three votes to pass the Build Back Better Act and the Infrastructure Investment and Jobs Act. Schumer passed the so-called bipartisan infrastructure bill with the help of 19 Senate Republicans over the summer.

Punchbowl News reported that rumors suggest Biden may travel to Capitol Hill next week to pressure Democrats to vote for both bills, although Biden’s visit ahead of the failed September vote on the so-called bipartisan infrastructure bill did not rally Democrats to pass the bill.

Biden told CNN’s Anderson Cooper Thursday that he believes he can get a “deal” on infrastructure before he travels to Europe.

The $1.9 trillion Build Back Better will likely face last-minute adjustments as Sen. Kyrsten Sinema (D-AZ), one of the key swing votes in the Senate, said she would not back any tax increases to pass the mammoth legislation.