President Joe Biden warned Thursday that Americans were just “down” as a result of the coronavirus pandemic, arguing it was a factor of why the country was not going back to normal.

“There’s a circumstance that exists where people are really worried about what they’re going to do,” Biden said during a CNN town hall in Baltimore, Maryland on Thursday nights with Anderson Cooper.

The president gave a lengthy answer to a question about labor shortages in the country and admitted that some people just were not ready to go back to work.

“There’s a lot of people who are just down,” he said, pointing out people who may have lost a family member or had been impacted by the coronavirus pandemic.

The president’s remarks echoed a similar tone from former President Jimmy Carter’s infamous “crisis of confidence” speech, where he acknowledged America’s struggles during the energy crisis in the 1970s.

“No, I’m not joking,” he said, adding, “[Y]ou don’t have all the things that matter to people that go into things they look forward to.”

He said it would take time for people to feel better again. 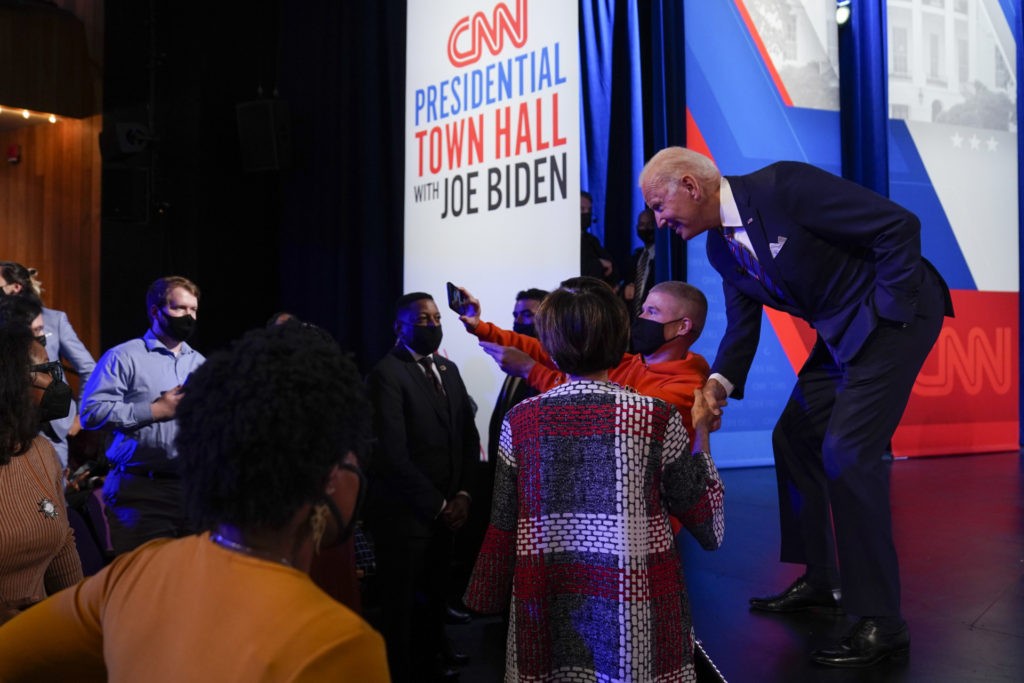 President Joe Biden greets people during a break as he participates in a CNN town hall at the Baltimore Center Stage Pearlstone Theater, Thursday, Oct. 21, 2021, in Baltimore. (AP Photo/Evan Vucci)

When Cooper asked what he would say to people who were “down,” Biden urged them to seek help.

“Look, being down, having some problem in terms of needing some advice — if you have a broken spirit, it’s no different than a broken arm,” he said. “You shouldn’t be ashamed of it. You should seek the help.”

He acknowledged that Americans were already asking him about how Christmas and Thanksgiving might be impacted by supply chain issues and the ongoing pandemic.

“There’s a lot of anxiety people have,” he added.

Biden did not have any answers to the immediate crises facing his administration, particularly on higher gas prices, inflation, and supply chain issues.

“I must tell you, I don’t have a near-term answer,” Biden admitted, when asked about gas prices and energy costs.

After a mother asked Biden about rising gas prices and the increased cost of groceries, Biden reminded her that she got a stimulus check in March as part of his American Rescue plan.

“What you got is you got that — that $1,400 check in the mail, and you got a lot of things that help ameliorate some of the concerns and costs, because we knew what we were coming into,” he said.