The American Trucking Associations (ATA), Truckload Carriers Association, International Foodservice Distributors Association, and other business groups sent a letter to the Biden-Harris administration to warn the vaccine mandate on companies with over 100 employees could exacerbate the trucker shortage. The ATA said last month the industry is short drivers by 30 percent.

“We estimate companies covered by the mandate could lose 37% of drivers at a time when the nation is already short 80,000 truck drivers,” the group wrote. “We ask for flexibility for transportation and supply chain essential workers, particularly truck drivers who spend most of their time in their trucks and have minimal contact with colleagues and customers.”

IFDA joins 95 other trade groups in an open letter calling on the Biden Administration to work with our industries on 5 priorities to address the immense challenges impacting our nation’s supply chain: https://t.co/ypXlySJSxc #supplychain #supplychaindisruption #foodservice pic.twitter.com/UzzPgknS8E

The Occupational Safety and Health Administration (OSHA) issued rules for Biden’s mandate on Thursday. The rules state companies with over 100 employees will receive $14,000 fines for each violation. The fines may increase to $136,532 for repeated violations. OSHA also stated the agency is weighing how it may expand the mandate to include companies with less than 100 employees. 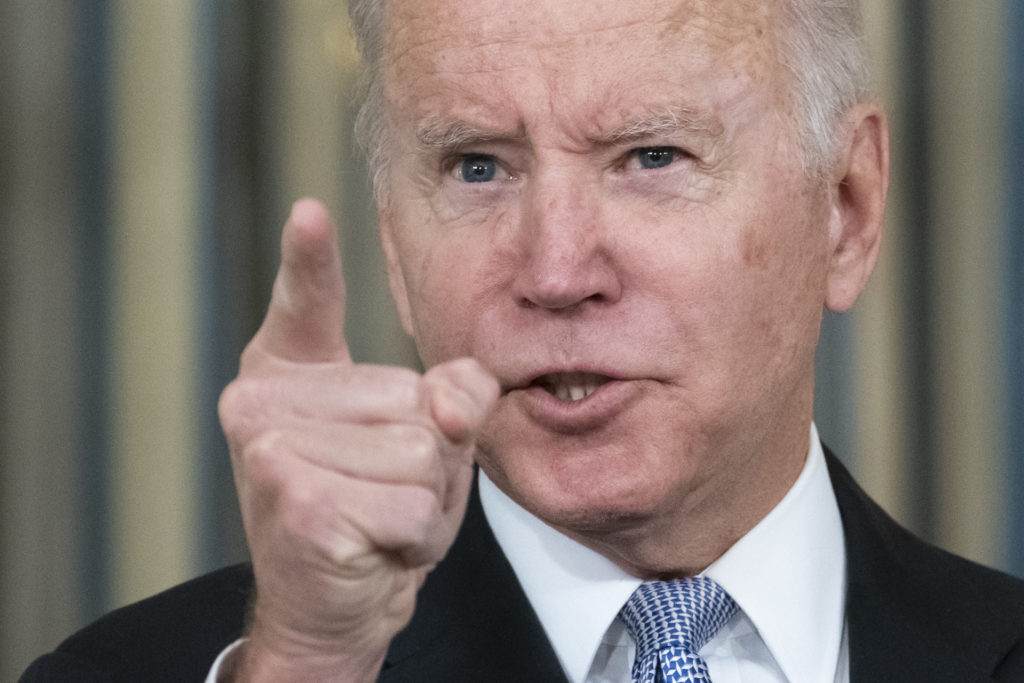 President Joe Biden responds to a question as he speaks in the State Dinning Room of the White House, Saturday, Nov. 6, 2021, in Washington. (AP Photo/Alex Brandon)

The mandate, set to go into effect January 6, may impact many truckers negatively, perhaps even driving them out of business. A trucking business with over 100 employees, named Lawrence Transportation Company, told the Examiner their strategy may be to fire employees to reach under the 100 employee threshold. But the owner, Eric Lawrence, also noted fewer drivers may not be enough volume to remain open.

Biden’s vaccine mandate has additionally caused the ATA to consider canceling government contracts rather than firing employees. “I am confident but with heavy heart recognize a vaccine mandate will mean less capacity for the government as a customer of freight,” Executive Vice President for Advocacy Bill Sullivan told Politico October 31.

Members of the aerospace, distribution, defense and trucking sectors are warning the Biden administration they will not be able to meet its vaccine deadline https://t.co/YZsWEr9W89

Such pushback on Biden’s mandate by industry leaders is an indicator the supply chain crisis may take a turn for the worst. With ports jammed full of containers, the docks are struggling to keep up with full container ships waiting to unload cargo outside port complexes. Breitbart News reported Friday 159 ships were anchored outside the Long Beach and Los Angeles port complex to unload. And the backlog of ships has seemingly been increasing. In October there were 100 ships waiting to offload goods and in September there were 60.

The backlogged ports have also impacted truck drivers. Truckers have expressed frustration over the challenge of quickly picking up a container from the ports without waiting in long lines for hours.

The obstacle of obtaining loads from the ports has made it more difficult for truckers to earn money. As truckers are dependent on making successful deliveries to earn a living, delays may set them up to be fired, increasing the trucker shortage.

Truck drivers, who are often immigrants, are typically responsible for their rigs, which they purchase from trucking companies. If a driver fails to make a payment for the truck, becomes sick, or is unable to make a needed repair, the trucking company may fire the driver, reclaim the truck, and extract the driver’s equity in the truck.