Violent clashes have taken place on the frontiers of NATO and the EU as Poland defends its border with Belarus against thousands of Middle Eastern migrants driven there by Alexander Lukashenko’s regime in Minsk.

Aerial and on-the-ground footage released by the Polish authorities, government, and various official spokesmen show Polish police officers, border guards, and soldiers trying to hold back what is claimed to be thousands of migrants, some armed with wire-cutters, shovels, and axes being used to fell trees onto recently-installed protective fencing. 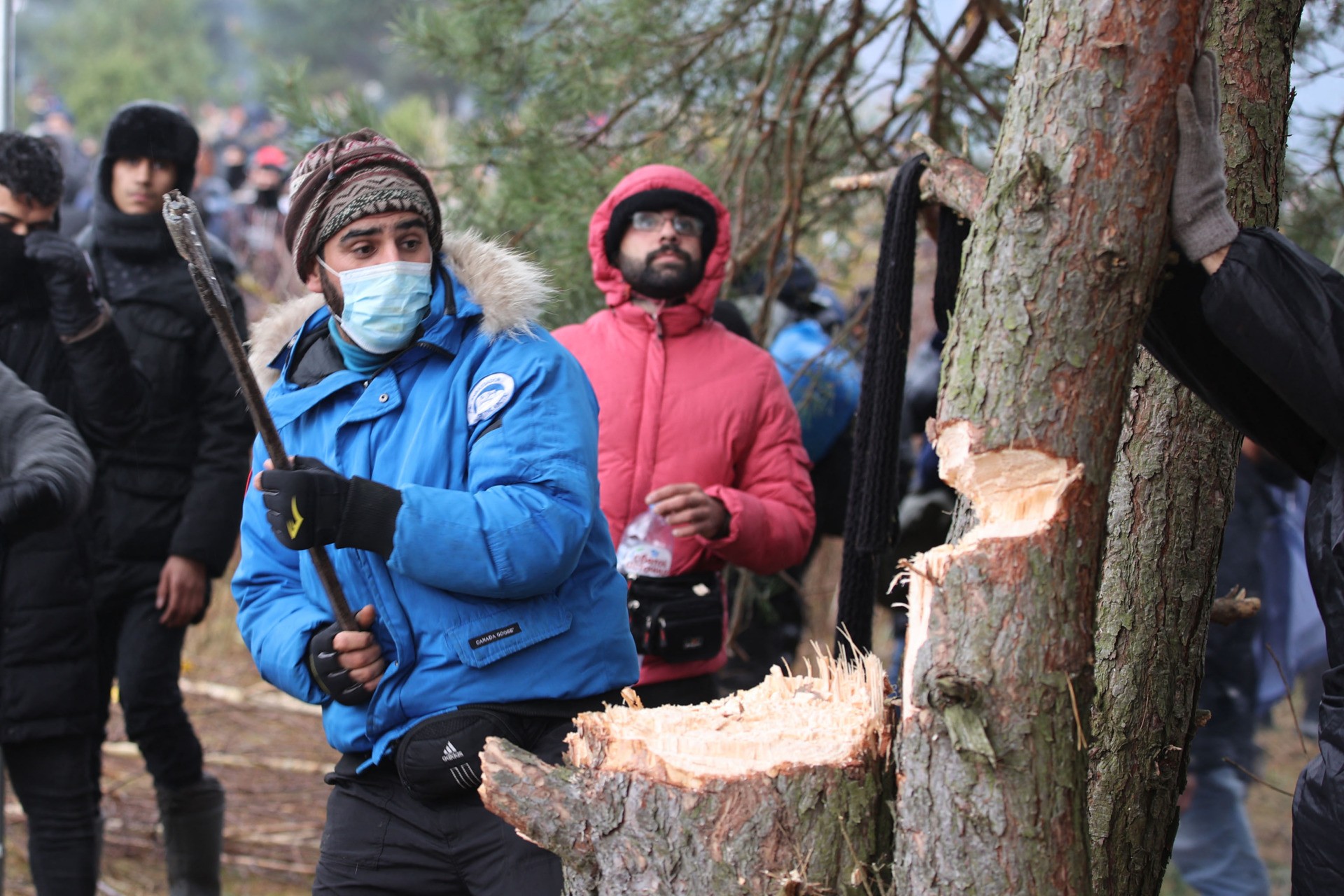 A picture taken on November 8th, 2021 shows migrants at the Belarusian-Polish border in the Grodno region. (Photo by LEONID SHCHEGLOV/BELTA/AFP via Getty Images)

Sebastian Kaleta, Poland’s Deputy Minister of Justice, told Breitbart London that the Polish border — which he highlighted was also the NATO and European Union border — was “under attack”.

“Our army, police, and border guard are preventing our border from being forced by a group of 3,000 migrants,” the Law and Justice Party (PiS) politician said.

“It is an action organised directly by the Belarusian regime of Lukashenko. These people want to go to Germany, but they are trying to do it illegally,” he explained.

The current situation on the Belarusian-Polish border is a result of the deliberate escalation of tension by the Belarusian side. Lukashenka's operation is in line with hybrid warfare against the West.@jensstoltenberg @mikercarpenter @janis_sarts @LT_MFA_Stratcom @SHAPE_NATO pic.twitter.com/uYlgEVfPF5

“We are dealing with the organized destruction of border fortifications,” said Piotr Müller, a Polish member of parliament and spokesman for Prime Minister Mateusz Morawiecki’s office, revealing that there have also been “direct attacks on Polish officers of the Border Guard, police, and soldiers.”

The office of the Polish president, Andrzej Duda, said on Monday that it “expected the attacks on the border to intensify in the coming hours” and that the President himself would be cutting short a planned visit to Visegrad ally Slovakia and convening a meeting of “the heads of ministries of national defence and foreign affairs, as well as military commanders and the commander of the Border Guard” to discuss the “dynamic” situation. 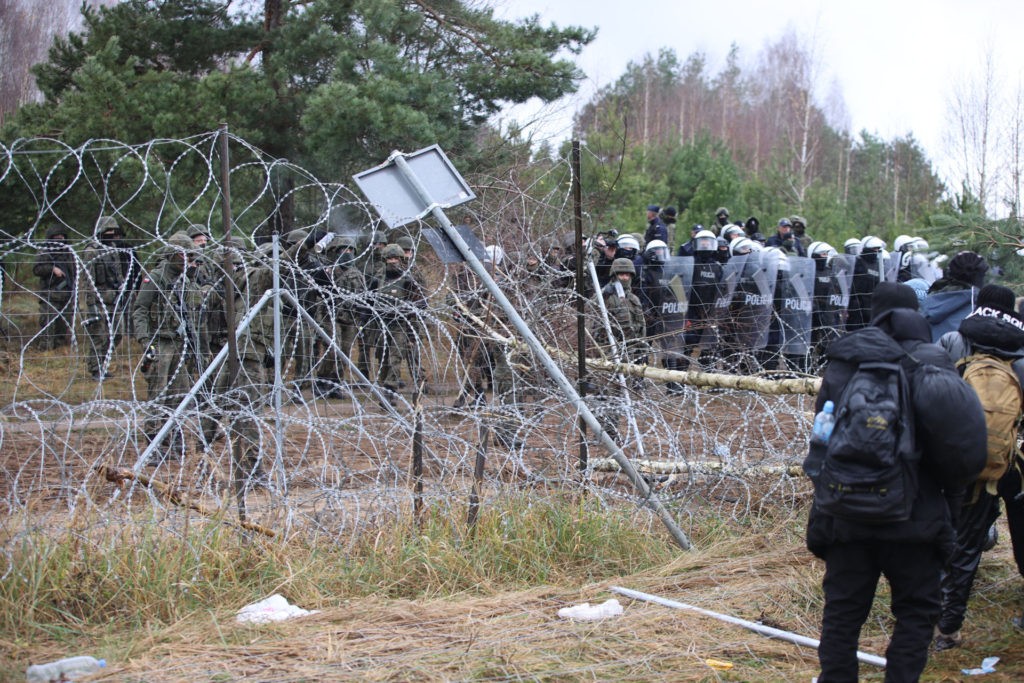 A picture taken on November 8th, 2021 shows Poland’s law enforcement officers watching migrants at the Belarusian-Polish border. Poland on November 8th said hundreds of migrants in Belarus were descending on its border aiming to force their way into the EU member in what NATO slammed as a deliberate tactic by Minsk. (Photo by Leonid Shcheglov / BELTA / AFP) / Belarus OUT

Lukashenko, a quasi-Stalinist leader close to Russian President Vladimir Putin, is accused of bringing migrants to the Belarusian capital of Minsk direct from the Middle East for the express purpose of pushing them to the border of Poland, Lithuania, and, to a lesser extent, Latvia, as revenge for EU sanctions and for the countries’ sheltering of some Belarusian opposition figures and dissidents.

Footage shared by Polish government spokesman Stanisław Żaryn shows long columns of migrants snaking along the highway in Belarus en route to the Polish border, in- scenes reminiscent of the 2015-16 crisis, when hundreds of thousands of Syrians and others poured into Greece and marched through much of the Balkans and Central Europe, usually with Angela Merkel’s Germany and other generous welfare states as their end goal.

“The Lukashenko regime’s use of migrants as a hybrid tactic is unacceptable,” a NATO spokesman has said of the situation in comments reported by The Telegraph, adding that the mutual defence organisation “continues to closely monitor the situation, which is putting pressure on our Allies Lithuania, Latvia and Poland.”

🇵🇱An emergency meeting of anti-crisis management headquarters is taking place in Poland right now. According to #Polish side, several thousand more migrants are moving to the border from #Belarus. The movement of cars at the border between Poland and Belarus has actually stopped. pic.twitter.com/QAJaZ6Hp2k

Belarus is home to a substantial Polish minority, many of them stranded in the then-Soviet Socialist Republic when Moscow redrew Poland’s borders following Hitler and Stalin’s effective joint invasion of the country in 1939.

This minority was much larger before the so-called Polish Operation of the NKVD, the Soviets’ secret police, of 1937–1938, which saw over 110,000 people with Polish ties summarily executed, and close to 30,000 sent to labour camps. Victims’ family members were deported to far-flung lands such as Kazakhstan or put into orphanages, in many cases, or left destitute following the seizure of the possessions of the deceased.

Poland’s parliament has voted through funding for a more substantial Donald Trump-style border wall to be constructed against Belarus, but is for the time being relying largely on emergency manpower and makeshift fencing to deter crossings.

"Such situations on the border are common. #Belarusian military is trying to escalate the situation every day by using provocations…", wrote Blaszczak. pic.twitter.com/iZOsmOBeAv