The White House infrastructure signing ceremony was disrupted Monday after Vice President Kamala Harris took the podium and was introduced with the wrong name.

Harris exited the White House with Biden on one side and ironworkers union organizer Heather Kurtenbach on the other as the president prepared to sign his $1.3 trillion infrastructure bill.

“Not yet,” Harris said, laughing awkwardly as she began her remarks.

Curiously, Harris was not chosen to introduce the president, as the White House selected Kurtenbach to do the honors. 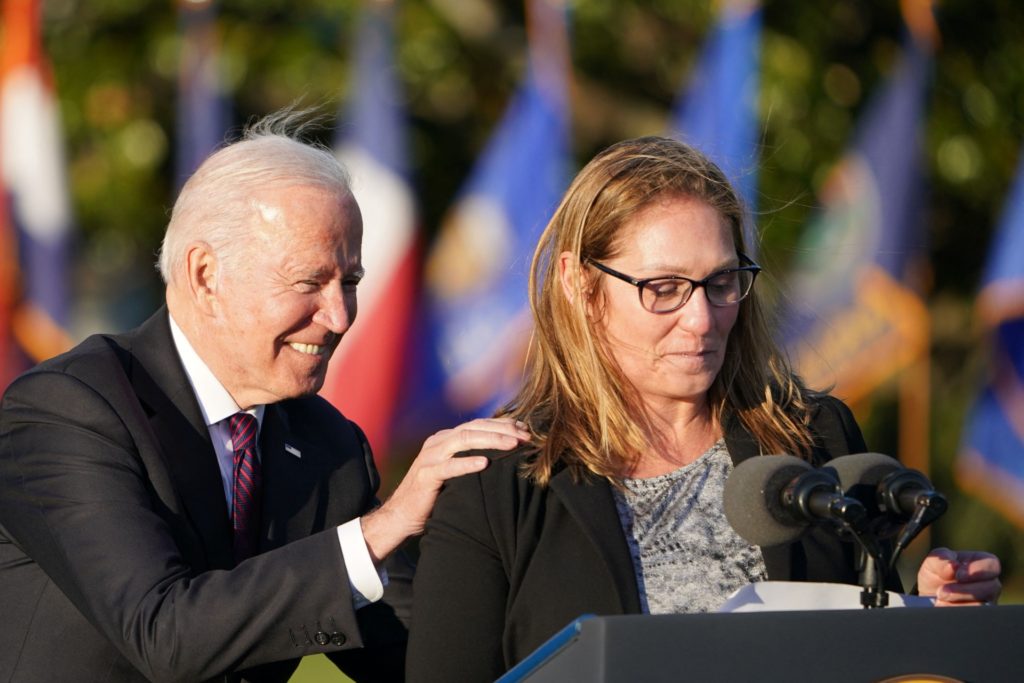 US President Joe Biden reacts as as Heather Kurtenbach, Organiser and Political Director of Iron Worker local 86, speaks during a signing ceremony for H.R. 3684, the Infrastructure Investment and Jobs Act on the South Lawn of the White House in Washington, DC on November 15, 2021. (Photo by MANDEL NGAN / AFP) (Photo by MANDEL NGAN/AFP via Getty Images)

The moment was one more example of how the Biden White House and Harris have an awkward relationship, after CNN reported Sunday multiple struggles between the two leaders.

Biden also began the ceremony joking that Harris’s husband, Doug Emhoff, is Jill Biden’s “second husband” after stumbling over his rhetoric while introducing the second gentleman.

“No. I’m joking. These guys travel all over the country together. I’m getting worried, you know?” he continued.

Even during the ceremony, Biden nearly signed the infrastructure bill without her, as she struggled to push her way to the front of the group for the moment.

White House press secretary Jen Psaki insisted Monday that Harris was a “key partner,” a “bold leader,” and a “valuable member of the team.”

“The president relies on the vice president for her advice and her council,” she said during the White House press briefing.