President Joe Biden, in partnership with non-governmental organizations (NGOs), is flying border crossers and illegal aliens into the United States on domestic commercial flights, for free, with waivers for them to bypass airport security requirements that American citizens must abide by.

The border crossers and illegal aliens, unlike American citizens, can bypass TSA requirements — providing no proof of identification.

A report from Just the News details the waivers that are given by the Biden administration and its powerful Rolodex of NGOs, corporations, and open borders groups that help get border crossers and illegal aliens into the U.S. interior with only the promise that they will check in with the Immigration and Customs Enforcement (ICE) agency.

Documents obtained by Rep. Lance Gooden (R-TX) show NGOs like the San Diego Rapid Response Network and Jewish Family Services — both partially funded by American taxpayers — are helping the Biden administration fly illegal aliens in for free and without having to face airport security requirements.

Just the News reported the details of one such specific case:

The packet reveals that the Honduran traveled north to Mexico, and once there, received the first dose of the Astra-Zeneca COVID-19 vaccine one week prior to entering the San Ysidro Port of Entry in San Diego, on Aug. 13. [Emphasis added]

The Honduran was processed by a Border Patrol agent and while in ICE custody was likely connected to a [Jewish Family Services] contact tasked with coordinating his travel. This included booking a free room at the Four Points Sheraton in San Diego, a Mariott-owned three-star hotel near the city’s Little Italy attractions, and a free United Airlines ticket to Louisiana, the Honduran’s destination of choice. [Emphasis added]

Border crossers and illegal aliens are provided with a typed-out letter that addresses TSA employees, stating “The individual(s) standing in front of you have recently been discharged from a U.S. immigration detention facility and must cross the country to present themselves for an ICE check-in approximately two weeks from now.”

“They are currently showing you all of their identifications in their possession, which should be adequate for them to be able to be searched in Secure Flight,” the document reads. “Please find them in Secure Flight and then allow entry if cleared.” 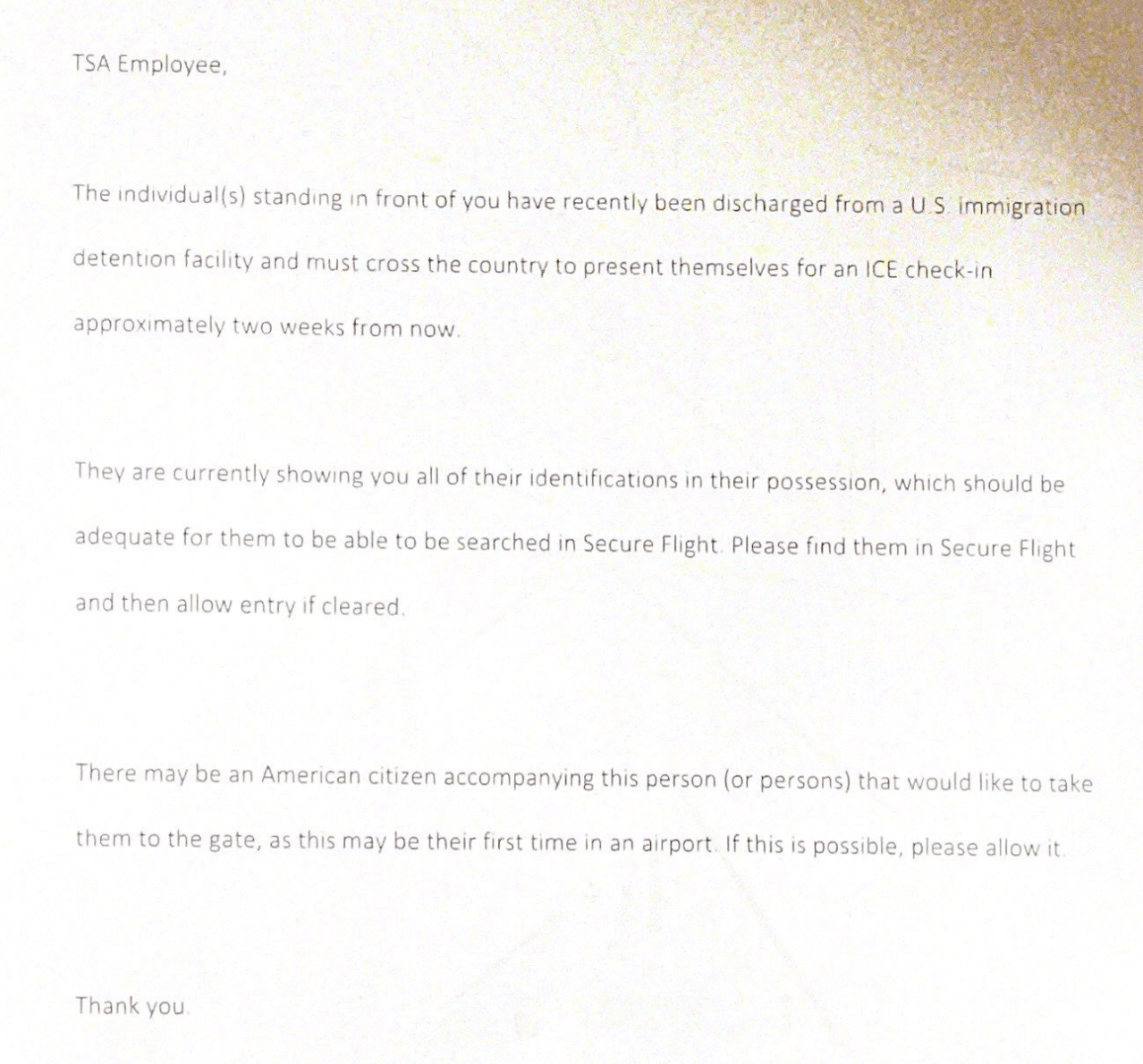 The welcoming given to border crossers and illegal aliens by the Biden administration has coincided with a surge of illegal immigration to the U.S.

This week, Department of Homeland Security (DHS) Secretary Alejandro Mayorkas said the administration expects that more than two million illegal aliens will have arrived at the U.S.-Mexico border in 2021 by the end of the year.

Mayorkas did not disclose the number of illegal aliens who have successfully entered the U.S. through the southern border. Current estimates based on DHS data reveal that anywhere from 530,000 to 600,000 illegal aliens have been released into the U.S. interior by the Biden administration from January to September.