The national average price of gas on Thanksgiving 2021 is at least $1.20 more than last year’s Thanksgiving.

From October, the national average price of gas has increased about one cent. The price was $3.387 in October, less than November’s average.

November’s increase in price is a part of a trend that has increased since President Joe Biden’s presidency.

The price of gas has increased primarily to Biden’s war on American energy. In January 2021, Biden canceled the Keystone XL pipeline.

In this Nov. 3, 2015, photo, the Keystone Steele City pumping station, into which the planned Keystone XL pipeline is to connect to, is seen in Steele City, Neb.  (AP Photo/Nati Harnik).

“The Keystone XL pipeline was expected to carry 830,000 barrels per day of Alberta oil sands crude to Nebraska, but the project was delayed for the past 12 years due to opposition from U.S. landowners, Native American tribes and environmentalists,” Reuters reported.

Biden is also weighing if he should cancel the 78-year-old Line 5 pipeline in Michigan. The pipeline may be canceled over what Indian tribes called an “existential threat to [their] treaty-protected rights, resources, and fundamental way of life.”

Gov. Gretchen Whitmer (D-MI) has already “revoked and terminated” the pipeline’s easement and demanded the line be shut down by springtime.

In the meantime, Biden has allowed Russia to enlarge its oil exports to Europe by building a pipeline from Russia to Germany. The project is devastating to American producers that sell the commodity to Europe. 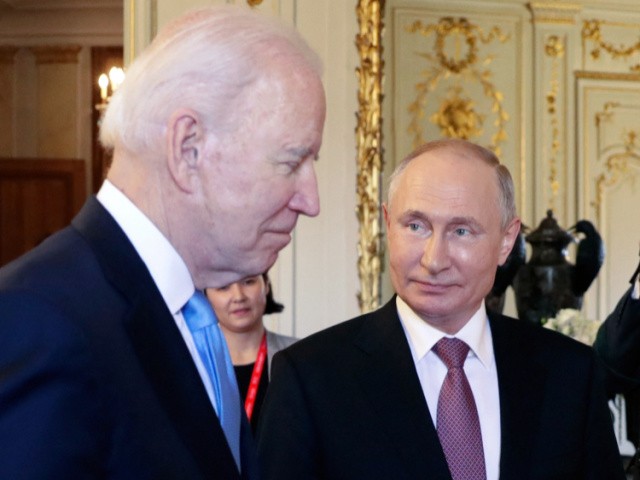 Biden has blamed the high gas prices not on his policies, but on price-gouging oil companies. Last week, Biden called on the Federal Trade Commission to investigate oil companies for “anti-competitive behavior.”

“The Federal Trade Commission has authority to consider whether illegal conduct is costing families at the pump,” Biden wrote. “I believe you should do so immediately.”

To artificially drive the price down for American workers and families, Biden has released oil from the United States’ oil reserves.

The oil reserves were refilled in 2020 by President Trump, who was criticized by then-candidate Kamala Harris for bailing out oil companies over supply.

The oversupply of oil was hurting American producers and American energy independence.