The Biden-Harris administration on Monday reportedly began weighing the closure of a Michigan oil pipeline while gas prices have tripled since 2020.

The administration is considering a request from 12 federally recognized tribes to cancel the 78-year-old Line 5 oil pipeline, the Daily Mail reported. The pipeline is owned by a Canadian company named Enbridge.

Enbridge is already fighting multiple state and federal court battles to keep the pipeline open. According to Detroit News, Gov. Gretchen Whitmer (D) has already “revoked and terminated Enbridge’s easement with the state last fall and ordered a Line 5 shutdown by the spring, which the company is resisting.”

The tribes sent a letter to the Biden-Harris administration Friday to request their “help” in terminating an “existential threat to our treaty-protected rights, resources, and fundamental way of life.”

The tribes also called on President Biden to honor his campaign promise to “protect… fundamental interests.”

They argue the oil pipeline infringes on the 1836 Treaty of Washington, “which ceded Ojibwe and Odawa lands in Michigan in exchange for fishing, hunting and gathering rights on the treaty territory.” But Jason Hayes, director of environmental policy at the Mackinac Center for Public Policy, believes canceling the pipeline would violate an agreement with Canada that allows the pipeline to flow between the two North American countries. 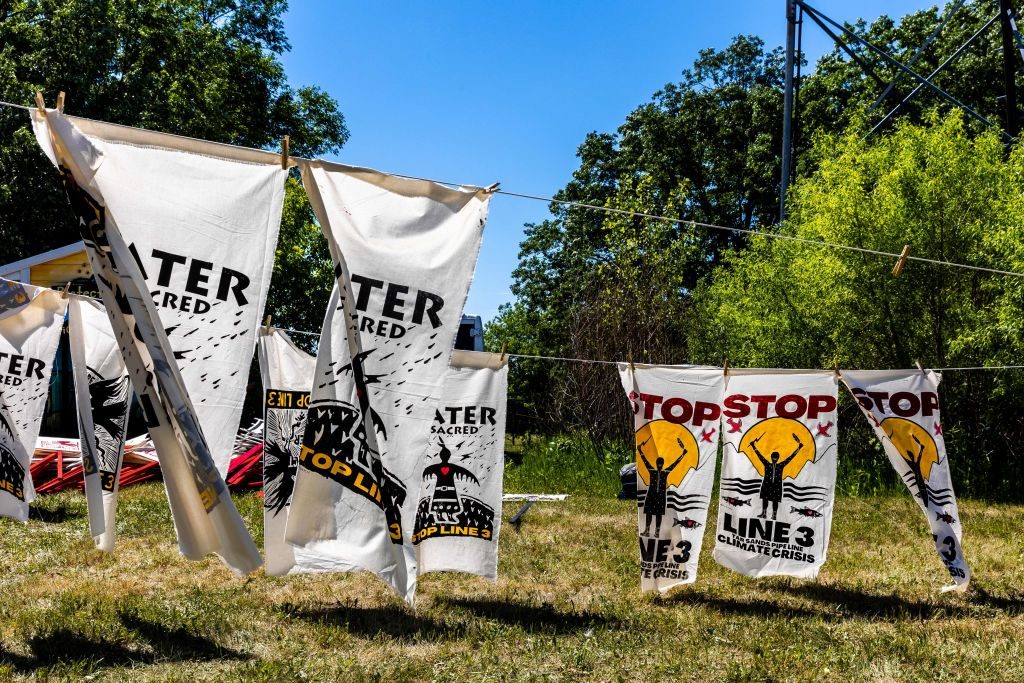 Flags reading “Stop Line 3” and “Water is Sacred” hang on a wire in the campsite on the White Earth Nation Reservation near Waubun, Minnesota, on June 5, 2021. (KEREM YUCEL/AFP via Getty Images)

“Well, we certainly hope not,” Granholm replied when asked on CNN if the “average gas price in America be $4 a gallon in the United States soon.”

“The president is all over this. Of course, every president is frustrated because they can’t control the price of gasoline, because it’s a global market. You can call upon increased supply, which he has done,” she continued. “And OPEC is, unfortunately, controlling the agenda with respect to oil prices. OPEC is a cartel and it controls over 50 percent of the supply of gasoline,” Granholm claimed.

Biden’s request for OPEC to increase the supply of gasoline comes as the administration blocked the Keystone XL oil pipeline by canceling the project’s permit in January. The construction of the pipeline was begun under Donald Trump’s administration after years of delay under Barack Obama.

The 1,200-mile pipeline “would have moved up to 830,000 barrels (35 million gallons) of crude daily, connecting in Nebraska to other pipelines that feed oil refineries on the U.S. Gulf Coast,” the Associated Press reported.