One America News (OAN) and Newsmax are backing Joe Biden’s far-left, radical pick for FCC commissioner, Gigi Sohn, despite the fact that she and the organization she co-founded have called for the blacklisting of conservative broadcasters — including OAN. 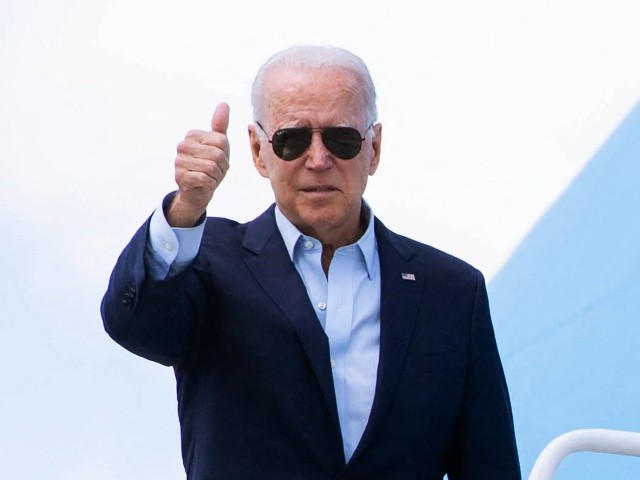 US President Joe Biden gives a thumbs-up from Air Force One prior to departing from La Crosse Regional Airport in La Crosse, Wisconsin, June 29, 2021.  (Photo by SAUL LOEB/AFP via Getty Images)

And the organization she co-founded, Public Knowledge, has called on cable and satellite providers to censor OAN, the same conservative broadcaster that is now backing her nomination.

Axios suggests that Newsmax and OAN might be backing the far-left nominee, despite her open hostility to conservative media, because they view the Sinclair Broadcasting Group — a top target of Sohn’s — as a competitor. OAN and Newsmax both opposed the attempted merger between Sinclair and Tribune Media, a position also taken by Sohn.

In a comment to Breitbart News, a Newsmax spokeswoman said the network had received assurances from Sohn that she would not use her power to censor conservative media.

“While we have a number of disagreements with Gigi Sohn, she has confirmed to us that she does not, nor will she, support the closing of cable or broadcast outlets based on ideological views — but she will support independent networks, a key reason we are supporting her as is One America News,” said the spokeswoman.

This, and its lack of candor during the failed merger with Tribune, calls into question Sinclair’s fitness to be a broadcast licensee. Will @FCC do anything when Sinclair’s licenses are up for renewal? https://t.co/EPNExBfXS0

Despite OAN and Newsmax’s stance, Republican leaders in the Senate are lining up to slam Sohn’s record of partisan comments.

“Gigi Sohn is a complete political ideologue who has disdain for conservatives. She would be a complete nightmare for the country when it comes to regulating the public airwaves,” said Sen. Lindsey Graham (R-SC).

“Sohn, obviously, her views are going to be very far apart from where mine are on all the issues,” Sen. John Thune (R-SD) said in a comment to Politico at the start of the month. “She’s very left, she’s going to be a heavy hand in regulation.”

In addition to her stated support for censoring conservative broadcasters, Sohn has also accused Facebook of trying to “appease right-wing extremists,” indicating that she will use her power to push social media censorship as well.

As Breitbart News previously reported, Sohn’s track record of partisan statements includes a description of Brett Kavanaugh as an “angry white man,” and accusations that Republicans are trying to “pack the courts” and “suppress the vote.”

Breitbart News has reached out to OAN For comment.