Massachusetts Gov. Charlie Baker (R) announced Wednesday that neither he nor Lt. Gov. Karyn Polito (R) will seek reelection next year, a move that substantially shifts the remaining field of candidates as they now battle for open seats in the Bay State.

Baker and Polito said in a joint statement that they are stepping down at the end of their terms because they want to spend more time with their families than their current positions allow. They also said that if they were to run for office again, their campaigns would be a “distraction” while Massachusetts recovers from coronavirus shutdowns.

“We have a great deal of work to do to put the pandemic behind us, keep our kids in school, and keep our communities and economy moving forward,” they wrote. “That work cannot and should not be about politics and the next election.”

The pair continued, “If we were to run, it would be a distraction that would potentially get in the way of many of the things we should be working on for everyone in Massachusetts. We want to focus on recovery, not on the grudge matches political campaigns can devolve into.”

The most prominent Republican gubernatorial candidate now left in the Bay State, former state Rep. Geoff Diehl, responded to the news with a statement of his own, saying, “While I have often differed on policy with this administration, I have always liked Charlie Baker and Karyn Polito personally and I wish them the best in their future endeavors.”

Diehl, who won the Massachusetts Republican Senate primary in 2018 but was defeated in the general election by Sen. Elizabeth Warren (D-MA), will continue onward with his gubernatorial campaign by balancing picking up swing supporters of Baker — who has served as a popular moderate among Bay Staters — while being backed by former President Donald Trump. 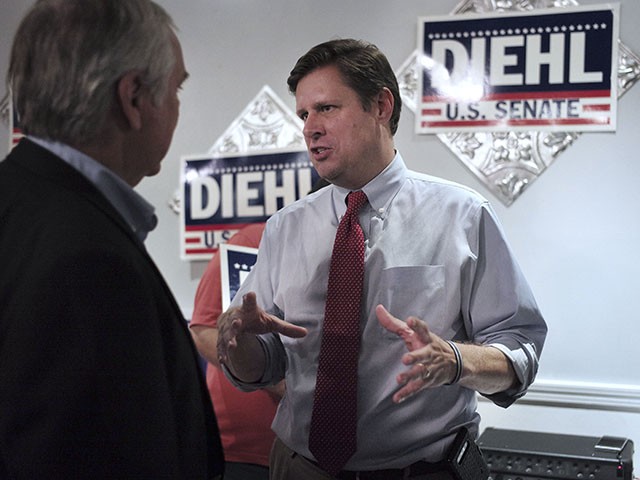 The former president announced his endorsement of Diehl in October, calling Baker a “RINO” and Diehl a “true patriot” who believes in “low energy costs and our independent energy policy (which was just obliterated by the Biden Administration with energy costs soaring!).” Trump said Diehl is “strong on Crime, Election Integrity, our now under siege Southern Border, loves our Military, and has a big focus on taking care of our Vets.”

Aside from Baker and Polito surviving two terms as Republicans in Massachusetts, Democrats are favored all-around in the populous New England state. The party has for more than two decades held all nine congressional seats and both Senate seats, and the state voted more than 30 points in favor of President Joe Biden last year. Not since the 1980s when President Ronald Reagan was running have Massachusettsans voted in favor of a Republican at the presidential level.

“Our party remains committed to the America-First agenda advocated by President Donald J. Trump, and it’s clear to me that Charlie Baker was shaken by President Trump’s endorsement of another Republican candidate in Geoff Diehl,” GOP chairman Jim Lyons said, adding, “We look forward to working with President Trump as we continue to rebuild the Massachusetts Republican Party.”